Yet another opinion poll has reflected a public mood for change in our laws around cannabis – and this one has an interesting wrinkle.

The new poll was conducted by UMR for the reform group Start the Conversation between July 29 and August 17 – and although the sample size was 1000, half the respondents were asked one question about medical cannabis and half another. It washed up like this: 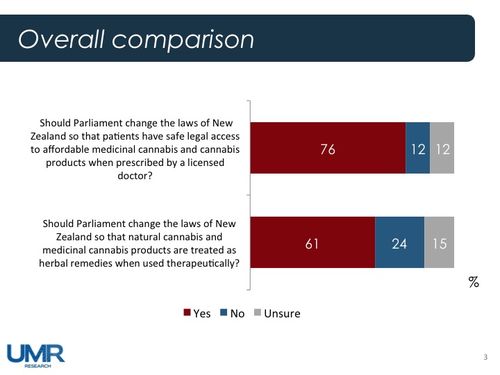 The key to the first question is "when prescribed by a licensed doctor" ("registered doctor" would have been more accurate, but the meaning is clear). It's not quite at one end of a spectrum – the most conservative framing would have been to ask only about cannabis products or even pharmaceutical-grade or approved products – but it offers a clear enough contrast to the second, which implies a significantly more liberal approach. It suggests that cannabis and cannabis products would fall under the endlessly-gestating Therapeutic products regulatory regime if used therapeutically. You'd theoretically be able to buy them in a supermarket.

I confess, I'd have been given pause if asked about the issue in terms of "herbal remedies", but the surprising thing is how little support was shed on the second question. 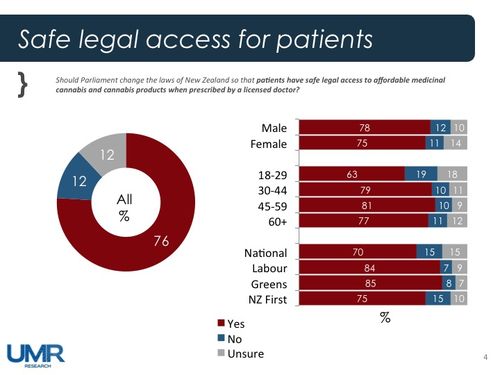 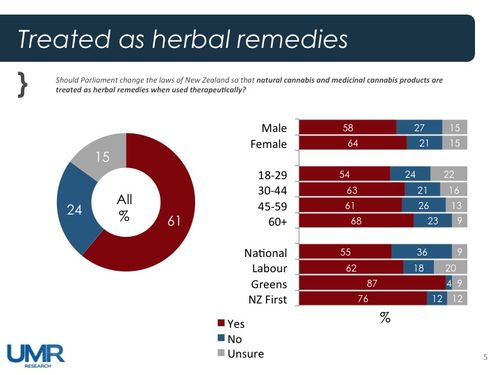 Even National voters went, by majority, for the "herbal remedies" concept. I'm not suggesting that concept is a likely reform option, but it's an interesting illustration of the extent of public support for some action on medical cannabis.

But there's something else there. Look at the demographics. Younger respondents (18-29) were by far the most conservative on both questions and over-60s showed the highest support for the more liberal option. When you're facing age-related pain and infirmity, perhaps things look different. You're not seeing a recreational drug, but a solution.

In general, the responses demonstrate, again, that the public takes a substantially more favourable view of medical, rather than, recreational cannabis, for a range of definitions of "medical". If things do change in the next few years, it's reasonable to suppose that Grey Power will have more to do with it than Generation Zero.