The discussion, inevitably, ranged considerably further than that, alighting on the present existential threats to journalism and why having an existential crisis isn't wholly a bad thing.

Troy had had the most interesting week of any of us, being part of the founding team at Newsroom, which launched on Monday with a story that was both thoroughly traditional (a Melanie Reid stakeout!) and emblematic of new approaches (it was shared with Stuff as part of a "content deal").

Tim Murphy, Troy's boss and cofounder of Newsroom (with Mark Jennings) lurked at the back of the room most of the time, but he'll be under the bright lights when Media Take returns next week. Tim will join us along with former Metro magazine editor Simon Wilson, who recently became The Spinoff's Auckland editor. Are they old dogs learning new tricks?

Like The Spinoff, Newsroom hasn't engaged with the basically broken internet advertising paradigm, but has sought revenue via commercial sponsorships. (There was some lively discussion last night about the perils or such relationships.) And like Public Address, it is also seeking support directly from its audience, via the new PressPatron platform.

Speaking of which, we've just completed our first month as PressPatron's debut client. As of today, we've earned just under $1000, including a very generous one-off donation of $200. It's a modest but encouraging start and my view is that it's up to us to show we're worth supporting. I also like the fact that the money is tied to us doing journalism and I've tried to reflect that in what I'm doing for the site.

The next step will be launching individual PressPatron buttons for Public Address bloggers who want to set up accounts. I want to add some new voices too, and I'm targeting a redesign/refresh mid-year. To everyone who's chipped in – thanks so much. As the number of PressPatron clients grows (and there are more coming soon), thank you. I hope and trust you'll continue to find us worth supporting.

As I noted, above, Media Take is back next week. There are some changes – most notably that while we'll be back on Māori Television on Tuesday nights, there'll be an expanded hour-long version on Sundays. There are some new features too, including Alternative Flax, a regular video-selfie vox-pop slot produced by Tipare Iti. Oh, and we, too, have a content deal with Stuff ...

If you'd like to come along to the first Media Take recording for the year, just be at TVNZ at 5.30pm on Monday. It'd be lovely to see you.

Today's New Zealand Herald features a double-page celebration of the 30th birthday of its NZME stablemate, Newstalk ZB, which is described as "New Zealand's most popular radio station". 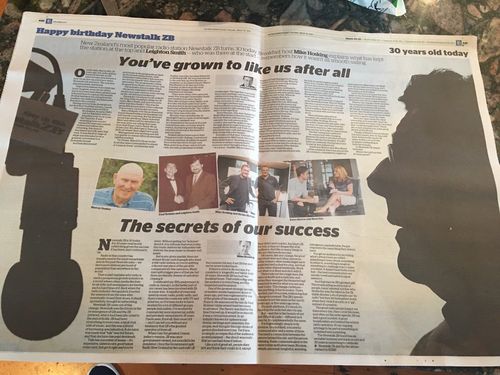 You might be surprised to hear that, but its sort-of true in the context of a radio ratings system that lets everyone be a winner.

I explained this back in July, when the first radio survey in many years to include Radio New Zealand was published. As part of the agreement to allow RNZ in, RNZ can only publish it numbers a week after the ratings for commercial stations are released – and it's not allowed to brag about them.

A subsequent survey was published in November and was reported in the Herald under the headline Radio survey results: Paul Henry can't touch Mike Hosking. The story declares:

But no, by this measure (also known as "cume") RNZ National still isn't the most popular radio station in the country. That, as usual, is MediaWorks' pop station The Edge. Among commercial stations, both More FM and The Breeze registered more listeners each week than Newstalk ZB.

So how can Newstalk ZB claim to be the most popular radio station in the country? By looking at station share – in this case, the average share of the total audience  listening to radio at all times across the week. But of course that still only works because the station with a higher share, RNZ National, is excluded.