The news is, as you and your friends have probably observed to each other, a bit dark at the moment. Natural disasters at home and abroad, butchery in Libya, scientists being sacked, Obama looking more like the old boss everyday. And if that weren't enough, yesterday's offering here -- on TPPA and the Criminal Procedure (Reform and Modernisation) Bill -- gave you two expansive new fronts on which to fret.

So, I thought, kittens. And ponies and puppies and unicorns. That's why the world needs from a Friday blog post. (Truth be known, I'm going to struggle on ponies. That's basically a chick thing. Ditto for unicorns, which are really just ponies with interesting psychological baggage.)

But I believe we can all agree that the Audubon Centre for Research of Endangered Species has brought a good deal of cuteness into the world by assisting the conception of these two rare African Black-Footed kittens. Since doesn't have to involve fuel rods every day, you know.

And also, because it's Danielle's boy Bobby's birthday, and it was conveyed to me that Bobby would very much like to see puppies on his birthday, a Welsh corgi doing very little else but being cute as a button:

And more hot corgi action, seeing as the monarch's grandson is in the country. These guys aren't cool, or probably even clever, but they're certainly game.

On the other hand, there is Maru, the world's greatest domestic cat, who has a Wikipedia article and a blog and 77 million views on YouTube.

Happily, Maru's blog has been updated with an assurance that he survived the Japanese earthquake unscathed. There is also a picture of him in his very groovy carry-case.

There are those, of course, who perceive feline intelligence as a threat, and believe that if we let them, the cats will one day move against us.

But I did promise kittens, rather than cats, didn't I? I didn't promise hunting kittens in slow motion, but you know I'm going to go the extra mile for you, right?

Thanks to Leo for helping me with these clips. Thank you also to Jo McLeod for this picture of an otter kissing a goat, which is something I would not have thought to google:

And no post would be complete without a picture of Colin the Cat, who may one day be as great as Maru. 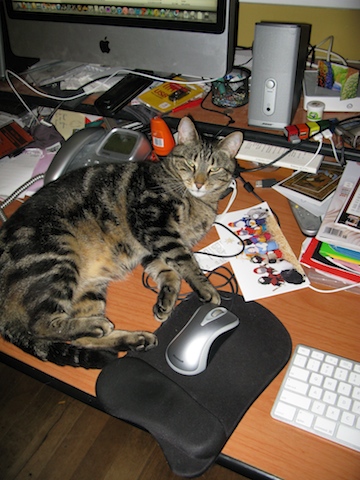 And yet, still no ponies, still no unicorns. Dude, I'm a dude.

Feel free to add happiness in the comments. To embed a YouTube clip, just paste in the full URL (not the embed code). And sorry, you can't embed images. Just link to them ...