Vaughn Davis has a good post about being called by a reporter last week for his opinion -- as a Social Media Expert -- on Lorde's "barrage" of angry tweets about her family being jostled by media on arrival at Auckland airport last Wednesday.

He wasn't quoted because, he thinks, he didn't believe the tweets were particularly angry and a handful of them wasn't really a barrage: "I thought they were more honest than anything else."

Whatever did go down at the airport was enough for her management to later ban camera crews from that evening's homecoming show at Silo Park, leaving reporters to make their lonesome live crosses from outside the fence. (I said hello to Rebecca Wright afterwards. She was cheery enough but hadn't even been able to see the show, so had improvised and was waiting for some young fans she'd lined up to give their review of the show.)

I didn't realise until the weekend that there was some record of the airport encounter in this video shot by a New Zealand Herald cameraman and uploaded the same day.

They're prepared for press duty on arrival. The rest of the family comes out first, then Lorde emerges, accompanied by her manager Scott Maclachlan, and  fulfils her obligations with reporters and fans in good spirit. She's wearing dark sunglasses, because, well, you don't really want a camera looking at your eyes after a 12-hour flight.

"Thanks very much!" chirps one girl who gets an autograph.

"You're welcome," says a weary-sounding Maclachlan. "Els, we have to end up going out that side ..."

From that point, about 2.40 on the video, things get a bit fraught. Mclachlan asks the TV cameramen to "back up a bit you guys" and eventually goes to leave with his client.

Someone says something like "She's gone -- she's running away ..."

Update: The speaker there was Guy Williams, having a laugh but clearly spooking the herd around him. He has since apologised on Twitter.

Actually, she's walking away. It's the camera people who are running through the airport; not to follow her but to get ahead of her as she goes to rejoin her family. I understand that it's a cameraman's job to get all the shots his reporter and editor might need to put together a story, and the "leaving in a taxi" shot is one of those, but they're lucky someone else's child wasn't skittled in the stampede.

And what on earth is the reporter doing elbowing her way along with the cameramen? What does she think she's going to get? (Clue: not an interview. That's for sure.) [NB: I originally said that the reporter was Heather Du Pleissis Allan - I thought it was. I'd like to be clear it's not her and apologise for dragging her into it. It wasn't her.]

What's on the video isn't that bad, but it certainly does seem as if some members of the press need to take a deep breath and show some measure. Act like grown-ups, even.

At any rate, the incident has had its consequences. When Lorde emerged at Sydney airport yesterday she was flanked by both private security guards and (according to Jonathan Marshall on Twitter) no fewer than 10 Australian Federal Police officers. 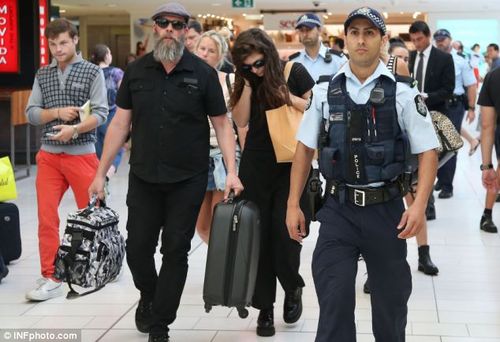