The New York Times' front-page story, In China, Human Costs Are Built Into an iPad, is important not just because it has raised the issue of the labour practices behind Apple's products, but because it goes some way towards explaining what makes Apple any different from any other consumer electronics or computer company.

Because make no mistake: the Chinese factories where parts are made and assembled into products? Everyone uses them. CNet's Larry Dignan published this chart showing where the revenue comes from for Hon Hai, the parent company of the manufacturing giant Foxconn: 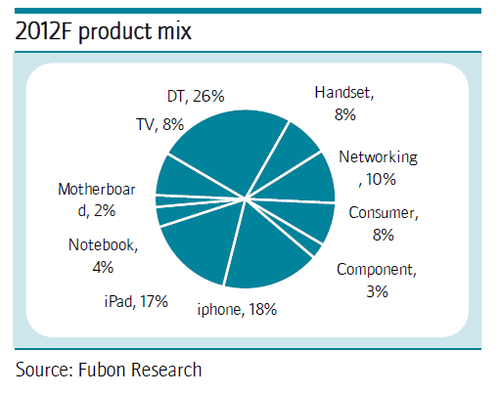 Analysts estimate that Apple will be roughly 40 percent of Foxconn’s revenue in 2012. Hewlett-Packard is about 25 percent, according to Fubon Research. No one is writing about HP, though, even though its supply chain report reads just like Apple’s. Every electronic device you have on you right now goes through China. The data center that powers the cloud behind those devices were also made by folks stacked in tech dorms in China. The minerals in the battery were mined somewhere. Deep down do you really give a rat’s ass about the working conditions that created those relatively inexpensive devices? Of course not, you’re from a Western economy. And from what I can tell you’re still buying as much tech gear as you can.

Sure: if you're trying to address an industry-wide problem, focusing on only one, glamorous company for which the news media have a permanent hard-on won't solve the problem. But it might help. Perhaps you'll raise overall consciousness the way Greenpeace did when it hammered Apple annually on the sustainability of its products and processes and said far less about competitors who didn't measure up to their own fancy green policies.

Focusing on Apple was a much more effective way to the headines. And, as it turned out, to Steve Jobs himself, who directed a greening strategy that sharply reduced the use of bad chemicals in Apple products and just as sharply improved its e-waste performance. After his death, Jobs was lauded by Greenpeace's green electronics campaigner Tom Dowdall, who declared that "today is a day to reflect that among all of Steve Jobs achievements in the technology industry, one of the less well known ones is one of the most important."

It will be a grand day when the same can be said about labour practices. But I suspect that will be much harder. Commentators who don't know much about Apple often attribute the company's aggressive outsourcing and subsequent issues to Jobs. But Jobs, until reality foreclosed, wanted factories like palaces -- American palaces. In his tremendous Jobs biography, Walter Isaacson described the NeXT factory Jobs had built after he left Apple in the 1980s:

The walls were museum white, as they had been at the Macintosh factory, and there were $20,000 black leather chairs and a custom-made staircase. . . . He insisted that the machinery on the 165-foot assembly line be configured to move the circuit boards from right to left as they got built, so that the process would look better to visitors who watched from the viewing gallery.

It was Apple's current CEO, Tim Cook, who as chief operating officer reinvented Apple's supply chain -- and saved the company in the process. Apple went from having nearly the worst inventory performance (that is, the amount of the company's resources tied up in products made but not yet sold) in its industry, to emphatically the best. The Mac you bought on the internet was pretty much built after you'd ordered it.

Cook's insight similarly underpins another key element of Apple's brand: the ability to make each new, iconic product appear in massive quantities as if by magic. We are outraged consumers if the latest iteration of the iPhone line doesn't appear here very soon after its US launch, or if some of the phones are defective, but the system that produces these products is not trivial.

It also could not happen in America. Before his death, Jobs met with Barack Obama. Isaacson records that the president asked Jobs why Apple commissioned so little manufacturing in in the US, and Jobs' response:

Apple had 700,000 factory workers employed in China, he said, and that was because it needed 30,000 engineers on-site to support those workers. ‘You can’t find that many in America to hire,’ he said. These factory engineers did not have to be PhDs or geniuses; they simply needed to have basic engineering skills for manufacturing. Tech schools, community colleges, or trade schools could train them. ‘If you could educate those engineers,’ he said, ‘we could move more manufacturing plants here.’

But even if the US started training more engineers right now, such a massive mobilisation of skilled and semi-skilled labour would largely still only be possible in China.

Cook has reacted indignantly to the Times' stories, addressing a letter to the company's 63,000 employees that declared that "any suggestion that we don’t care is patently false and offensive to us.". He emphasised the increasing breadth and depth of Apple's internal reporting on conditions in its supply chain.

And he has a point -- I don't think any of Apple's competitors report as extensively as Apple does. It has acted on these reports and dumped multiple suppliers. But Apple isn't making the more difficult choices about the way these problems are engineered into its business model.

The Times story says this:

Many major technology companies have worked with factories where conditions are troubling. However, independent monitors and suppliers say some act differently. Executives at multiple suppliers, in interviews, said that Hewlett-Packard and others allowed them slightly more profits and other allowances if they were used to improve worker conditions.

“Our suppliers are very open with us,” said Zoe McMahon, an executive in Hewlett-Packard’s supply chain social and environmental responsibility program. “They let us know when they are struggling to meet our expectations, and that influences our decisions.”

Setting aside HP's glowing review of its own performance, Apple could do this. But its business model tends to militate against it. Pulling the rabbit from the hat demands secrecy up till the moment of reveal. Hampering competitors from copying Apple's innovations requires more secrecy -- Apple notoriously keeps a lid on who its suppliers are and exactly what parts are used in its devices.

And the final key to burning off the followers is price. If Apple can use its sheer scale to get ever-better supplier prices, no one else who tries to compete can do it cheaper. And no one else can hope to match Apple's profit margins. This, too, is part of the model. Apple makes only 11% of the mobile phones bought by Americans. But it makes 28% of the global revenue in phone manufacture. In Q2 last year, it captured two thirds of the industry's available profits.

But that influence on the industrial environment is what would also allow Apple to make a difference, the way it did on the sustainability of its products. We don't actually want Apple to lose its way and lose money like Nokia has. We want it to make decent labour practices at the many companies that supply it a part of its success.

That will require the news media to raise its own game. If there's one thing you've heard about Foxconn, it's the spate of 14 suicides at Foxconn's massive Shenzen plant in 2010;  often cited as proof in itself of the inhuman conditions in its factories. But as Auckland University's StatsChat blog noted, the plant employs 300,000 people. The suicides there in 2010 represented a rate of 4.7 per 100,000 workers. The authors, Stephen Cope and Maxine Pfannkuch, conclude:

While each Foxconn suicide is a tragedy, with such a large workforce 14 suicides in 2010 is neither unexpected nor unusual. If anything, Foxconn’s workers have a lower suicide rate than could be expected, on average, amongst their peers.

To be precise: the suicide rate at Shenzen was significantly less than the lowest of several reported rates for the Chinese population as a whole: 6.6 per 100,000. And it's a third of the all-ages suicide rate in New Zealand and a quarter of New Zealand's rate of suicide in the younger demographic likely to be working the assembly lines for Foxconn. We might want to think about that.

Getting manufacturing out of China isn't the answer. People come from China's provinces to work in these factories because it gives them some chance to aspire. They're as entitled to those aspirations as much as any American worker is. It also bears noting that Foxconn manufactures in India, Czechoslovakia and Brazil, where governments exercise more effective control over labour practices than we see from the leadership in China.

And this is where some onus goes on the Times. Almost every grim truth about tech supply chains is true of the industry behind a product made and enjoyed far more widely in America than iPhones: meat, especially chicken and pork.

It's six years since Human Rights Watch published its report Blood, Sweat, and Fear: Workers’ Rights in U.S. Meat and Poultry Plants, and it seems precious little has changed since then. Hundreds of thousands of largely immigrant workers face both repetitive strain and acute injury, and are commonly sacked when that happens. Some factories keep workers in line with armed private cops. There are none of the onsite hospitals or recreational facilities you might find at a Foxconn plant. And the US government underwrites the brutality. Under a 2002 Supreme Court ruling, undocumented workers who are illegally fired for union organising are not entitled to back pay for lost wages.

It is not to diminish at all the case for Apple and other tech companies to raise their game to say that it will be a welcome day when the New York Times sees fit to give over its front page to an investigation of the human hells being created on American soil.