If I was to draw up a list of "bands I am not remotely interested in seeing play", it would be quite long. And Pearl Jam and the Deftones would probably both be on it. The fact that Pearl Jam are playing a mammoth two and a quarter hour closing set at next week's Auckland Big Day Out just means that's two and a quarter hours when I will be somewhere else at the festival.

But I realise that there are some people who are very excited about seeing both of those bands playing -- and who are understandably disappointed that the timetable has them playing at the same time on Friday night. That's a bit of a bummer for them, as was, for other people, the curious withdrawal of Blur from the bill, which is what led to the Deftones being brought on in the first place.

But that's the reality of a multi-stage festival. It's what happens. So the abusive nature of some of the online responses -- the Herald reworked its story's angle around "disgusted" commenters having hissy fits and slinging off at the "incompetent" promoters -- leaves me very much in sympathy with the promoters.

Aside from the fairly obvious reality that you can't please all the people all of the time, there are, as BDO promoter Campbell Smith tweeted yesterday, other factors at play:

Fans shld know that myriad of factors go into scheduling, not least Artist requirements as to playing times, when planes arrive, lots.

I had a conversation along much the same lines last night with one of the Laneway promoters, Ben Howe. There are contractual factors in their scheduling too. They'll also have as many as half a dozen acts arriving on the day for their show, and the practicalities of that will also play some part in determing the timetable. You need to ignore quite a lot of reality to believe that the only reason your favourite bands are clashing is because the promoters are incompetent.

The promoters of both festivals have had rude shocks this year. The BDO lost Blur; Laneway lost Lorde and James Blake to the Grammys. (And it could have been worse -- it turned out that quite a few of the Laneway acts were in peril of Grammy noms this year. The promoters were sweating.) But they're moving ahead with their respective giant parties.

Look at it this way, disgruntled Pearl Jam fans. They're basically playing until the end of freakin' time. The $185 price of a Big Day Out ticket is around what it would cost you to see them play a full concert set on their own. And at a festival, you get to be mobile. There are no "premium" areas at the front of the stage. I mean, surely there's one other band you wat to see besides the Deftones? No? Oh well, then, sell your tickets in a huff like you keep threatening to, and see no bands at all. That'll teach 'em.

Personally, I'm a wee bit disppointed that Toro y Moi and Primus clash (I'll be seeing the former) and the Phoenix Foundation and Ladi6 (soz, Phoenix dudes, haven't seen Ladi for ages). And to be honest, the Deftones are a bit of a sore thumb between Snoop Dogg and Major Lazer. But, y'know, I'll live.

There are some interesting differences on the new site. I'll post some photos I took this morning in the comments, where they embiggen better, and you'll get some idea of the fact that the main and alternative stages are closer in size on the new site -- they really are more like dual headline stages. Itll be far less of a haul between them than at Mt Smart, but I can see now that the single bridge over to the Lakeside Stage is going to be a chokepoint all day. But it looks pretty good, and the stadium bowl is huge.

I'll actually be involved during the day in one of the three "pop-up magazine" sessions at the Metro Cube. I have a yet-to-be-confirmed onstage interview to do at 1pm, a 10-minute debate with Duncan Greive about the state of music in Auckland at 1.20 and I'm chairing a lighting debate on "What's the point of the Big day Out?" at 1.55. Swing by if you're there early. I aim to be in lively mood.

And -- I'm still not sure whether this is a good idea -- I'll be helming the 95bFM 9-11am show on the Saturday morning after the Big Day. I'll have a friend or two in the studio with me and we'll have some fun.

Meantime, here's a pic from the Western Springs of old. Crowds for the famous Rolling Stones show in 1973. 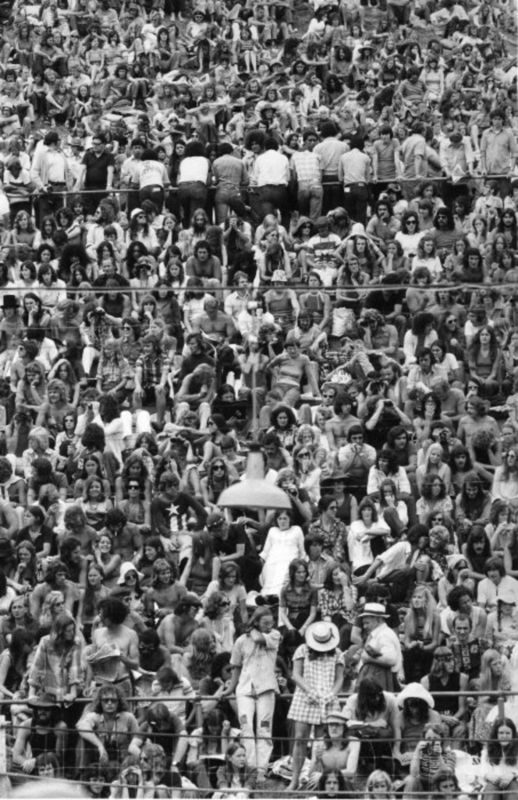 The Ryan Hemswith remix of Lorde's 'Ribs', which is available on a free EP of pop-oriented remixes by the Canadian producer.

Another in Leftside Wobble's excellent Acid Soul series of mixes, with a timecoded tracklisting even. Click through here for the free download

One of the more obscure reggae versions of 'Be Thankful for What You Got':

And, finally, currently number one on TheAudience chart -- another talented, moody ("Just a teenager in a world of condescension"), confident kid comes out of nowhere. Impressive: