I've noted before that some of the better fun to be had in live music in Auckland lately is in small bars on the city fringe -- in part because the scale of the music people are playing matches the scale of the venues. Newmarket's Lucha Lounge, for example, is literally the size of someone's lounge.

My pal Andy and I got along to Lucha last Thursday night to hear Arthur Ahbez play songs from his album Gold. It was most enjoyable.

We ended up coming up with backstories to explain how this mystery man, with his easy tenor and fluid, organic, out-of-its-time sound, had come from. I went with "outcast black-sheep scion of a rich Remuera clan" (this replaced my earlier, debunked, theory, "Lawrence Arabia in a beard disguise"), but it turns out he's just a perfectionist who played in a band for years without feeling he'd written a song worth recording. This is all explained in a good Q&A with Auckland Library's All Things Musical blog.

It was also the first time I've seen Paper Cranes do their sunny, assured folk-pop thing.

You can download Little Darling at a price of your choosing here on Bandcamp:

Had I been a reporter for some Euro-hipster magazine on a Tourism NZ cultural junket, I would have taken out my notebook and jotted down the phrase "New Folk Sound of Auckland" before leaving.

Then I'd do a trip to Waiheke or something before writing "but the Auckland music scene's not all intense young men with beards," and describe going to Nick Dwyer's Weird Night Out dance party in the Imperial Lane complex at the bottom of Queen Street on Saturday. (I may in fact have been the only person who went to both. There's that.)

This was a really well-produced party. Three rooms over two levels; bars, security and AV all done nicely. (I actually saw a really great bit of sensible security work on the door as I arrived, with a bouncer taking aside one young guy and telling him to go for a walk, buy some water and clear his head for 20 minutes -- and then he'd be able to come in and join his friends.)

The She's So Rad Special Disco Version were already playing when I arrived: 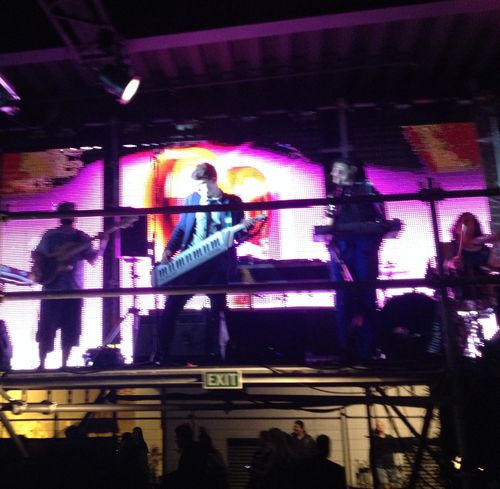 Key-tars okay! I think the thing with Jeremy Toy is that whatever he does, he commits to it -- the funky Open Souls, the authentic shoegaze of She's So Rad, and, now the no-mistaking-it disco version. It helps, of course, to have Chip Matthews, the funkiest bass player in town, on your team.

Weird Together is Dick Johnson, Dwyer and a bunch of friends from far places. I've seen them before and felt the disparate elements didn't quite come together, but gee, they nailed it on Saturday night. And the crowd certainly thought so:

After that, the headliner was American DJ Todd Edwards, who I enjoyed but didn't quite stick out. I'm quite old, you know. Thanks to all concerned for a great evening. Nick Dwyer, you're adding value.

Having spent some time this week arguing on Twitter with the author of the blog post that declared Lorde's 'Royals' is "deeply racist" (I'm not giving them any more inbound links, soz) because it observes that the ostentation of major label hip hop and other Top 40 pop isn't terribly relevant to suburban teens in New Zealand, I can report that she and her friends aren't really worth arguing with.

But Tom Beard pointed out something interesting. Which is that William DeVaughan's 1974 hit  'Be Thankful for What You Got' embodies an almost identical sentiment to 'Royals':

Though you may not drive a great big Cadillac

Gangsta whitewalls, TV antennas in the back
You may not have a car at all
But remember brothers and sisters
You can still stand tall
Just be thankful for what you got.
Diamond in the back, sunroof top

Diggin' the scene with a gangsta lean

The song has been very widely covered. You may recognise the Curtis Mayfield version:

There are several reggae versions, includng this one by Winston Curtis:

And of course the saucy Massive Attack version.

I feel a mixtape coming on.

Is it really 10 years since Bic Runga's 'Something Good' single? I thought it was a nice pop song at the time, but I didn't realise that Andy 'Submariner' Morton had done a great funky remix for the b-side of the CD single (remember those?). But Peter McLennan did, and he's done a nice little mash-up with the original video:

Details on how he did it are here on his blog.

Peter has also done a great piece for Audioculture on the long-lost EMI pressing plant and studio. Good week for him, then!

Matthew Bannister is taking Evolver, his cover of the Beatles' Revolver on the road. Well, to Wellington.

One Man Bannister play with Vorn and The Changing Same at Meow, Wellington, Saturday 16 November

And with The Changing Same, The Honeywine Stones at St. Peter's Hall, Paekakariki, Sunday 17 November

Over at TheAudience, you could think about voting this She's So Rad tune up the chart to a more fitting position:

The English DJ Tony Johns has been throwing quite a few classic edits up on his Soundcloud account in the past few weeks. They include this Supreme Team joint:

A take on the Lonnie Liston Smith classic with some added MLK:

A get-to-straight-to-the-point edit of the rave classic 'French Kiss' for those who don't require the slow-shag sections:

And a edit of the almost-impossible-to-find 12" "Afro Acid Mix" of Mory Kante's 'Yeke Yeke', from 1988. Just listening to this brings on a rush: [UPDATE: Actually, I don't like this edit -- it takes the dynamics out of the original remix. I have been singilarly frustrated in my attempts to buy the Afro Acid remix digitally and there's no point in you going through such frustration, so here is 'Yeke Yeke' the Afro Acid remix as a big, fat WAV file. Enjoy.]

And finally, young Thomas Jack has had his way with the Of Monsters and Men hit. As ever, it's sweet as: