The number one single on the official New Zealand Music Charts this week is 'Bad Blood' by Taylor Swift featuring Kendrick Lamar,  a formulaic cut-and-paste remix that inserts Lamar's verses in place of those in Swift's cringe-inducing original album track. Disclosure: I had to go and check that, because the hell I know what's in the pop charts.

And yet a good part of of my music fandom was forged in the wait for the weekly singles charts from home and abroad. I was already a teenager by the time New Zealand got its first official music sales charts on May 2, 1975 , an anniversary marked last week at an industry event and noted this week in an Audioculture article by Andrew Miller. (The pre-official years are covered in an engaging and well-illustrated article by Bryan Staff.)

But the first weekly chart that I really hung out for was not from home, but abroad. It was Casey Kasem's American Top 40. I'd sit on my bed on Saturday afternoons, finger poised on the record button of the radiocassette, trying to decode what song might be next from Casey's teasers. It was a particular education that ranged from things I can hardly believe I listened to (Kansas's 'Dust in the Wind', anyone?) to the odd tune that changed my life. The first time I heard Patti Smith was when Casey played 'Because the Night' and I can still remember thinking what the hell was that and where do I get more of it?

The local charts became more relevant to me when Ready to Roll's regular countdown began on TV in the late 1970s, signalling both the start of the music video era and the opening of a fairly quirky time for the chart itself. Thanks in part to a chart returns system heavily influenced by a handful of hip stores, the New Zealand singles chart was, well, singular.

In 1981, Joy Division's 'Atmosphere' and 'Love Will Tear Us Apart' entered at No.1 and 'Transmission' reached No.2. The Fall had their first Top 40 "hits" anywhere in the world, with 'Totally Wired' (No. 25) and 'Lie Dream of a Casino Soul' (No. 17). Perhaps more notably, the same conditions also saw the Screaming Mee Mees, a band we'd seen at the pub, vault to the top of the singles chart with 'See Me Go', in its first week of release.

When I moved later in the decade to London, I moved to a place where the charts were much more part of the zeitgeist. On Thursday evenings, Top of the Pops pulled as many as 15 million viewers. It really mattered what the Christmas number one was. And a combination of active hyping and a genuinely mercurial pop culture kept it all interesting. You couldn't have made Top of the Pops in America.

I played my small part in the charts in 1988, when I worked for MRIB, the firm that compiled Britain's "other" charts – that is, not the chart that featured on Top of the Pops. One day a week I would take a break from writing much of what was later pubished as The Guiness Book of Rock Stars (don't go looking for my credit, because there isn't one – the prick who ran the company deleted it after we fell out) and pitch in on the phones, getting returns from record shops the length of Britain. My favourite part of getting the returns was calling the big stores in Edinburgh. I could have spent all day listening to those girls read me numbers in their soft, sexy Edinburgh accents.

Since then, the local charts have expanded to capture first "digital" sales, then streaming plays. I might occasionally pay attention to them, but there's not much for me there. There's a little crossover in dance stuff I like (or, y'know, liked before they were popular), but I find most of today's pop bangers a bit joyless. And things like this week's No.3, Charlie Puth's 'Marvin Gaye', an execrable rip-off of 'Stand By Me', just sap me of the will to live. The odd Lorde single stands out like a beacon.

The introduction of streaming counts has made the NZ-only singles chart a bit farcical. Eight songs in the current Top 20 are by Six60. One of those songs has been there for 94 weeks now. It's actually even worse on the Independent Music NZ singles chart, where eight of the Top 10 songs are Six 60 songs. Yes, I do hate Six60: not personally, you understand, just their seriously fucking awful music.

In truth, this week's NZ album chart is a bit more palatable, with UMO and Janine and the Mixtape in the Top 5. On the other hand, Six60's debut album is still in the NZ-only albums Top 10, three and a half fucking years after it was released.

But these charts aren't for me. I don't listen to the radio stations or watch the TV channels that drive them, and I'm old and probably a bit of a snob. Maybe decades hence these songs will sound as cheery, cheesy and charming as a Chinn-Chapman production from the 1970s does now. But for the time being, there's much more interest for me in TheAudience – and in the alternative Top 10s at the likes of 95bFM and Radio One in Dunedin, which this week both feature this lovely moment in time from Tiny Ruins and Bic Runga, captured by Radio New Zealand's Music 101:

On a more positive note, these are really good numbers for this year's New Zealand Music Month, and I think they bear out what I wrote at the beginning of the month about the Music Industry's Commission's community focus for Music Month. It works. 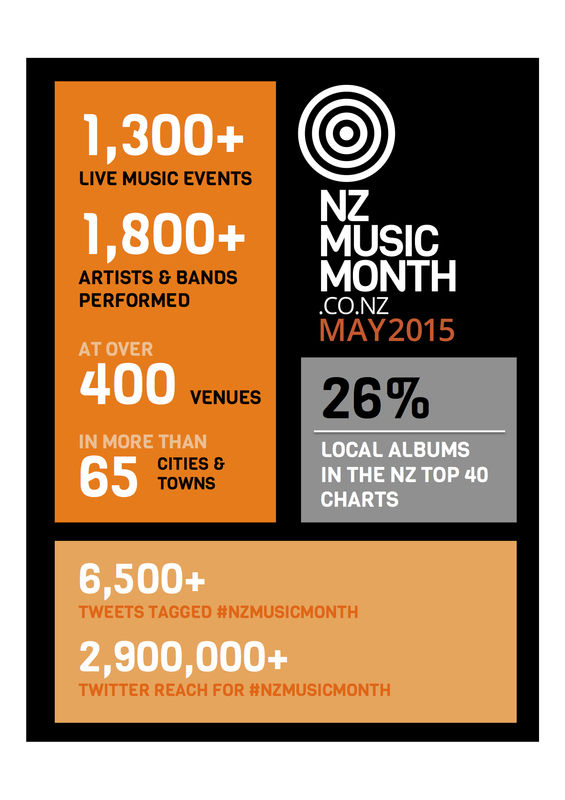 Note also that one benefit to flow from this year's Music Month is the compilation of a comprehensive list of music venues, not just in the main centres, but all over. The hope is that artists can use it as a reference and design tours that reach new and difference audiences. Bravo.

From the very far end of the universe to this week's music charts, Andrew Schmidt in Audioculture on the unflinching fandom behind his seminal Mysterex fanzine.

Aaaand ... because it's later than you think. Instead of individual tracks this week, some good Soundcloud playlists from other people.

This week's "New Tracks" playlist from NZ On Air Music:

And a great collection of the hottest new tracks from all over, put together by birthday boy Keegan Fepuleai. I can get behind this: