Unless you happened to be a Young Nat – and frankly, a few of them were probably wavering – to be young in late 70s and early 80s New Zealand was to be set against Prime Minister Rob Muldoon. It wasn't just the Springbok Tour, the mad economy and the SIS, it was cultural too. And a key cultural factor was the punitive 40% sales tax on recorded music.

Ironically, as Peter McLennan points out in his fascinating new Audioculture story on the tax, it wasn't Muldoon's doing. Although he defended it with a peculiar contempt, the 40% sales tax was the work of the preceding Labour government, which reasoned that records, even if they were pressed here, were imports, because the royalty component largely went offshore.

But Peter also highlights something I'd forgotten, or possibly never knew in the first place: they even taxed the turntables. And the tape decks, to the princely tune of 56%! 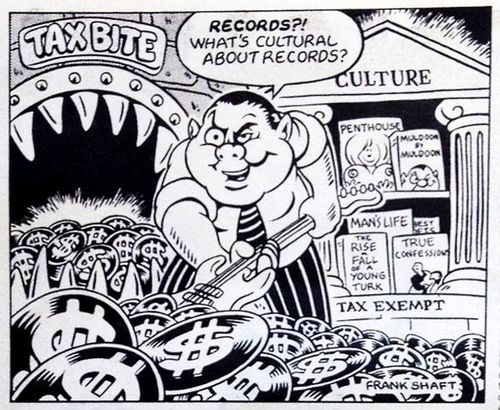 Twin articles on Bruce Russell, from the Xpressway angle and the Dead C dimenson.

And The Plague. No, not the Blam Blam Blam progenitors from Auckland, but the Rotorua outfit that featured future National Business Review publisher Barry Colman on drums.

Maisey is playing with a great lineup of Maori musicians as part of Waiata Toru & Wha, tonight and tomorrow night at the Vodafone Events Centre in Manukau.

Before the show, I asked Jan why she wasn't on Bandcamp (I'm allaregic to buying 256k files at the iTunes Store). Turns out – she is! Her newish single, 'For the Love of Glory', is there:

But the really nice new remix of the song by Ash Grey is still only for sale on iTunes. C'mon Jan!

At TheAudience, the first single from the fairly mysterious Encouragement is quite a thing:

And a nice, restrained house track out of Auckland ...

Chelsea Jade is back to guest with Boycrush on this sweet track from his new EP, Girls on Top, which was released this week and is on Bandcamp here.

Some blazed, blazing rock from the post-Checks band Racing:

The mighty Adrian Sherwood versioning a version on 'Space Oddity':

And, finally, one especially for John Campbell today. Rip it up and start again, John ...