As Karyn Hay noted at Wednesday night's announcement, it's been a poorly-kept secret in the industry that Auckland Museum has been preparing a major New Zealand music exhibition. But if the reveal of Volume: Making Music in New Zealand comes as news to you, you should regard it as happy news.

The exhibition was conceived a year and a half ago by Recorded Music New Zealand's Mark Roach and it has been shaped through research and writing from Graham Reid and the input of an advisory panel that includes Simon Grigg and Aroha Harawira.

It builds on the momentum that has gathered behind our popular music heritage in recent years, which includes Audioculture, a sweeping programme of digital re-releases guided by the RMNZ board and a fledgling Flying Nun Foundation (Ian Dalziel and I are on the board of that). So it's the right show at the right time.

Among other things, Mark looks after the New Zealand Music Hall of Fame and the hope is that the exhibition will be a significant step towards a permanent home for that initiative. It doesn't open till October 28 (and runs until May 2017), but you can get an idea of the flavour from the promo clip released this week:

Josell Ramos' 2003 film Maestro cops an undistinguished score of 36 on Metacritic and it's not hard to see why. The cinematography is mostly terrible, the soundtrack is badly mastered and irrelevant in parts, and its narrative is so jumbled that anyone who doesn't already know the story will find it mystifying. But it provides a rare insight into the early days of dance music in New York, when a community of mostly gay black men forged the culture everyone else embraced five, 10, 20 years later. There's even film from The Loft.

The film's owners appear to have given up on selling it and are instead concentrating on licensing the rare footage it contains (I'm guessing they have more than is in the movie for anyone with the budget to license the music, which they presumably didn't). Eight of the nine parts posted to YouTube have been taken down on copyright claims, but the first 10 minutes remains.

A comment under the clip claims that mint copies of the DVD have been going for as much as $450, which is daft. There's a magnet URL if you want to try your luck.

Bill Direen's back catalogue has (quite rightly) enjoyed some reverent treatment in recent years, with the German label Unwucht re-releasing his early EPs on beautiful-sounding 12" vinyl. Now, it's the turn of the first Builders album, Beatin Hearts, which is to be re-released as a vinyl LP by the US label Grapefruit. There's a pre-order deal for the album and the limited-edition 7" Buildermash EP.

And over at Audioculture, Roger Shepherd writes about writing his Flying Nun story.

Over at Fact, James Blake presents a list of his favourite b-sides and rarities for you to show off to your friends with.

My buddies The Onedin Line play with Sleepers Union at the latter's album launch gig at the Crown Hotel in Dunedin tonight. And they got a David Mitchell poster! 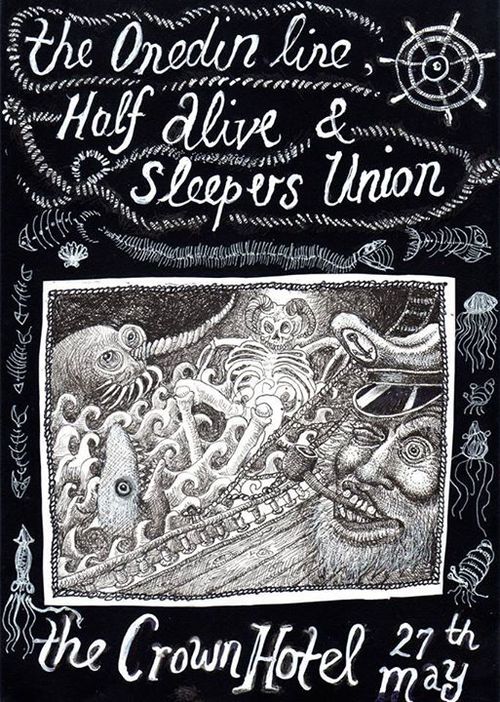 There's an intriguingly elcectic lineup for The Wine Cellar's multi-night Borderline festival next week– from Princess Chelsea and Soccer Practuce to Jay Clarkson and Phil Dadson. Leonard Charles with fully funky band sounds enticing. Nightly tickets or festival passes are available from Under the Radar.

And 95bFM presents its Fancy New Band showcase at the King's Arms tonight. Station manager Hugh Sundae will be dressing up in a pilot's uniform and picking up punters in a bus beforehand. The route runs a loop through K Road, Ponsonby, Grey Lynn, Arch Hill and Kingsland. Like this: 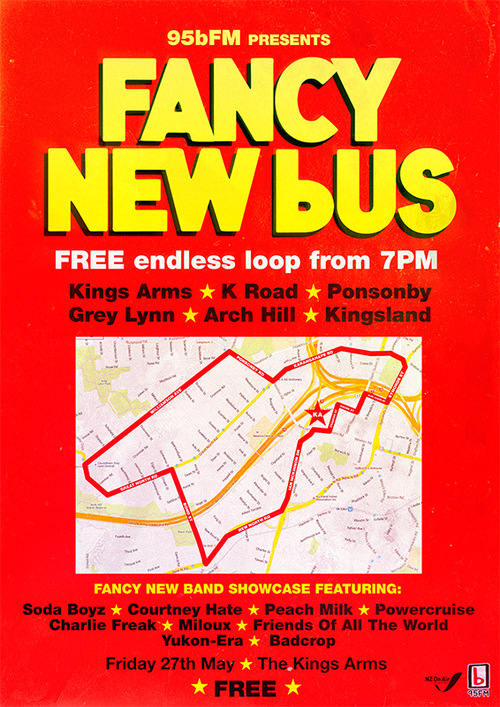 Fazerdaze has released a simple video that seems to perfectly fit her dreamy, disarming song 'Little Uneasy'. As Martyn Pepperell's interview for The 405 reveals, it's made in Hobsonville, on Auckland's expanding fringe. No, I didn't pick it either, but it looks like a sweet place for a ride.

And Lawrence Arabia released this late-Beatlesque heads up for his forthcoming album Absolute Truth, which is out on Flying Nun in July. He explained the song's genesis to The Pantograph Punch.

It was a nice surprise when Lontalius dropped a cover of Anika Moa's 'Dreams in My Head' into his set at his recent album launch. And this morning he put a recording on Soundcloud. Yay.

Unknown Mortal Orchestra dropped a new track this week. It conjures Prince and it is funky as shit. I like this a lot.

Space Above are Aaron Short of the Naked and Famous, Sam MCarthy and Maddie North. Their deep, driving debut is out now:

RocknRolla Soundsystem are back with a fresh edit. This time, it's Toots! (Free download with a bit of Hypeddit palaver.)

Pitch Black have re-upped tracks from their 2009 album of remixes, Rhythm, Sound and Movement. And it still sounds pretty nice:

A neat little mash-up of Juju's 'African Rhythms' and Fela's 'Sorrow Tears and Blood'. Click through for download options:

Righto - kitchen dancing time. Perth's Casual Connection have dropped a bunch of reworks on Soundcloud as free downloads, including this little corker: