My friend Andrew Dubber revealed in a blog post this week that he's working on a book he envisages as "a sociology of music curation" – or, to put it more prosaically: "Mixtapes. Playlists. Compilations."

As Andrew notes, he has some form in this area:

When I worked as a professor at a university in the UK, my ‘Music Programming for Radio’ undergrad class was sometimes referred to as Mixtapes 101. It was about how music connects to other music, how to select music for an audience or an environment, and how to both construct and read playlists as pieces of communication.

But the joy of this topic is that we all have form here.

I thought about it last night and realised that I began making mixtapes with the family cassette player in the mid-70s. I didn't call them mixtapes, of course: they were tapes filled with songs I'd recorded from Casey Kasem's American Top 40, which I would listen to every Saturday afternoon in my room, my finger poised over the record button.

Sometimes  I'd miss something new (the first time I heard Patti Smith's 'Because the Night' was a serious moment) and have to pray it would stay in the chart another week so I catch it. You needed to be able to parse Casey's teasers to anticipate when a certain song was coming.

Once I had these songs on the tape, I'd play and play them, which meant I heard 'Dust in the Wind' by Kansas more than any human should. This was a limited form of curation: I could pick the songs, but not their order, and if one song in the middle turned out to be a dud, I was basically stuck with it.

What I've also realised is that my mixtape-making has always been contingent on circumstances: access to new music, disposable income, the needs of friends, technology.

So when I started going around to my friend John's place and taping his brother's record collection, I recorded whole albums (hello Jesus Christ Superstar original soundtrack!). And when I began to have a little more money to spend on records, from punk at what came next, it was all about those records. Having them was the thing.

Indeed, I don't recall doing a lot of mixtape-making again until I lived in London and had access to a world of new records that my friends back home in New Zealand didn't. So I'd compile them and send 'em back to the colonies. When I came back for the summer at the end of 1988, I had a tape of the best of the house music tracks I'd bought during the year. I dubbed it off for my cousins and they took it back to Levin, where I gather it made them very popular girls.

I was definitely fully curating at this stage: thinking about, as Andrew puts it, "the right next song". I got pretty damn good with the Pause button – a tight edit was about as close you could get to an actual mix and I'd sometimes even drop in short snippets between tracks. One time I even voiced my friend's name into a clip from Keith Le Blanc's 'Malcolm X: No Sellout'. It sounded quite convincing.

Not long after I arrived back in Auckland with a new family, my friends Hilary Ord and Janet Sergeant opened the Verona on  K Road and I earned some coffee credit by by making a different kind of mixtape – a really long kind – on VHS tapes for them to play in the cafe.

The next major era of mixtape-making started in 1998, with the arrival of Cassady and Greene's SoundJam, which Apple soon purchased and turned into the first iteration of iTunes. It wasn't a whole lot of use until it was possible to write to CD, and even then there were various quaint technical shackles on the extent to which it was possible to rip, mix and burn. But yes, anti-piracy campaigns notwithstanding, I did spread the love on CD-R for a while.

Then there was the iPod. While my friends working for record companies were obliged to preach about the evils of illicit copying, they were early iPod adopters, and – because there was no local iTunes store and thus literally no legitimate way of actually using an iPod – they all became pirate playlisters too.

The iTunes Store itself, of course, provoked a shift to single tracks and away from albums. A trend for overlong albums (it's an extremely rare album that justifies a 70-minute run time) gave way to a world where you could just pick the tracks you liked.

Ironically, and even after DRM on paid music downloads went away, this new era made the sharing of mixtapes paradoxically more difficult. Sure, you could put all the songs on a flash drive for someone, but they'd be there  in the order the file system had them – and not the order in which you had carefully placed them.Sharing the "right next song" was no longer possible. (Actually, it is – and here's how you do it.)

As things settled out, I began making two distinct kinds of playlists in iTunes. One was for incoming singles, edits, remixes and other one-offs from Soundcloud and the like – a monthly record (and mostly titled by the month) of what was new, or new to me. Mostly, but not exclusively, forms of dance music. I started listening to fewer albums and more dance music.

The other kind was different. I started making longer playlists, most of them themed (downtempo, dance, indie gold). They went on my iPod or iPhone and were used on the road – a hotel room can be a lonely place with out your music – and at home.

I got into a habit of making a long (I think I have a nine-hour one) playlist for each summer, to play out on the deck, especially for parties (including parties of one). These are very much about the right next song – or, more often, group of songs. They'll typically start with some rocksteady reggae, or something like Daphne Walker, and then move through moods in the way I figure the party should go. So therell be four Clean songs in a row, then something else – and half an hour later, some dance grooves. I'm anticipating how the party should go – and to some extent, trying to influence the way it goes.

(The improvement of Apple's AirPlay technology means I can play them from my computer to three or four different devices in different parts of the house – all at the same time, if I choose.)

Over the years, my iTunes has consequently become a mess. I discovered that the easiest way to make a new playlist display higher in the iTunes sidebar was to prefix its title with an underscore. The next summer, it'd have to be two underscores. You can see where this goes.

And now, I'm the age of music streaming, the natural environment of the playlist, and I'm ... playing more full albums than I have in years. Well, why not? Everything is just there. Also, albums have come back to something like the length they were on vinyl. I will avail myself of playlists offered to me by Apple Music, but the means Apple provides within Apple Music for the making of personal playlists is just painful. Drag-and-drop has been replaced by a laborious plod through nested menus, for every song. I don't find making Spotify playlists all that congenial either, to be honest.

So that's me, for now. You may be wondering: have I made mixtapes to woo a girl? Oh yes. But that's a whole other story.

So: Laneway on Monday! The map of the new Abert Park venue and playing times are here. And while there's no any one act I'm dying to hear, I can certainly see a good musical path through the day, beginning with The Chills and then Bob Moses. You know what else Im looking forward to? Sitting on the grass under a tree.

One of the unsung treasures of the K Road precinct is the Auckland Old Folks Association Hall, or as it's invariably and lovingly referred to, "the Old Folks Ass". 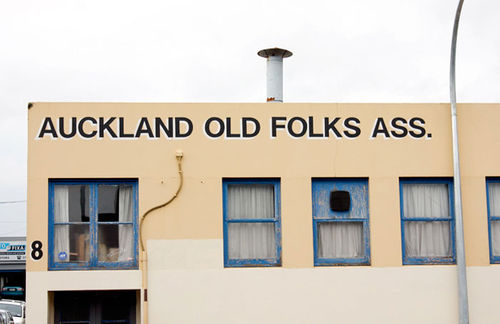 (Pic by James Watkins, from here.)

... founded in 1945 to provide social services for the elderly in an inner-city neighbourhood of social, cultural and demographic diversity, particularly through fostering gatherings among its members “irrespective of status or creed” in a hall designed for that purpose.

In 2011 the Association’s purposes were extended to support arts and cultural production, with a particular interest in performance and intergenerational cultural exchanges. While the association now also supports events by and for younger members, its humble past remains central to the Association’s mission, where art practices, activities, research and thought retain a connection to the ordinary demands of being a community.

Bands play there and as an unlicensed venue it's especially important to kids who are just beginning to discover the joys of live music. But it needs a new roof.

The association's committee has done an incredible job in raising $40,000 for the work – but they're $4300 short. They've set up a PledgeMe to bridge the gap. And as part of that Otis Mace and his friends are playing a benefit at the neaby Thirsty Dog tonight, where donations will be taken. However you care to do it, I think this is something worth chucking a little money towards.

Capture's Jon Ganley has some nice pictures from the Dinosaur Jr show on Monday night. I seem to be in the minority in not really digging it (way too loud for the room, and The Studio is a dysfunctional venue to the point of being dangerous), but I did really enjoy seeing Hex again. I caught some of their last song:

The Guardian has a wonderful feature marking the 30th anniversary of Steve "Silk" Hurley's 'Jack Your Body' going to number one in the UK singles chart (four months earlier, another Chicago house classic, Farley "Jackmaster" Funk's 'Love Can't Turn Around', had sneaked into the Top 10). Britain's enthusiastic embrace of the new, unfamiliar and highly disruptive form of music came as a huge surprise to the kids making, essentially for themselves and their friends, thousands of kilometres away. And then it changed popular music itself.

Top of the Pops didn't even have a proper video for 'Jack Your Body'. But Farley and Darryl Pandy had performed 'Love Can't Turn Around' in 1986, and that's still worth a play:

You know what's great? The new Flaming Lips album Oczy Mlody, that's what. It's mostly electronic, Wayne Coyne's bestie Miley Cyrus chips in – and I'm listening to it every day right now. Red Bull Music Academy Radio has an interview with Wayne Coyne that touches on many highlights of their 30-year career – including the time they appeared on Beverley Hills 90210.

And Karim comes up with a lovely dub of the Marley classic (click through to purchase):