If you were young, in New Zealand and liked music in in the middle of last century there's a good chance that Phil Warren provided at least some of what you needed. He was the conduit for the jazz and blues records you couldn't get, the kid who ran an empire of Auckland dancehalls, the man behind Johnny Devlin, The Chicks and Sandy Edmonds.

In the early 70s, he was Campbell Smith and Simon Cowell in one -- up to and including his appearances on popular TV talent quests -- although neither of them was ever deputy mayor. He wasn't an angel, but he was everywhere. And he was the guy who got the Rolling Stones to play Western Springs.

It was in that last context that I wrote about Warren last year for Metro magazine, in a story that came out of the personal archive he left with Auckland City Library. Phil kept everything -- receipts, contracts, carbon copies of every polite, firm letter he dictated.

Now, Chris Bourke has used that same archive, his own sources and his unique understanding of our entertainment history to write the Audioculture article on Phil Warren. I think the combination of Chris's knowledge and style, the sheer footprint of Warren's career and the riches of the archive make it the definitive Audioculture entry.

Also new on Audioculture, I am delighted to say, is an exhibition from Public Address's own Jonathan Ganley. This one focuses on his more recent photography -- from 2010 to 2014 -- but still confirms to his personal rules: "available light, fast glass, 1600 ISO film or higher, shoot from the audience, try to be unobtrusive, and photograph the band only when I love their music."

Of the 15 images, I most like this one. Street Chant's Emily Littler playing down the "wrong" end of the King's Arms last year and looking way cool while she does it: 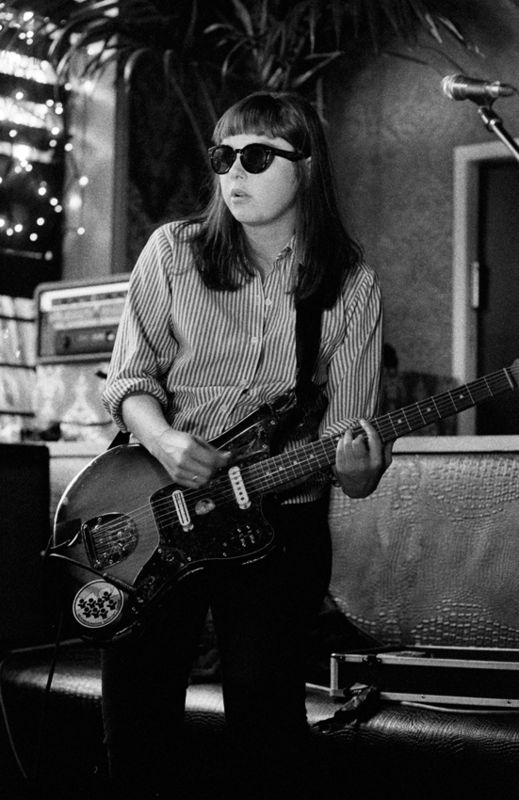 The Seattle station KEXP has premiered the new video for 'Orb', by Auckland=based Flying Nun band Ghost Wave. It's a bit do-not-adjust-your-set:

Background on how it was done here on the KEXP site.

And if you missed Nick Dwyer's great report from the dancehalls of Ghana for Radio New Zealand's Saturday music programme, you can play it right here:

And, of course, the hour Chills founder Martin Phillipps spent talking to Richard Langston last Sunday morning (minus the music they played, unfortunately).

It's immensely cheering to hear that things are happening again for Martin and the band -- and I'm sure they'll be as relieved as anyone when they can publicly confirm that rumoured Glastonbury 2014 booking.

And how nice that after being referenced multiple times over the years on Shortland Street (believe me, I've been making a count), last night The Chills  actually played on the show. The episode is here on demand.

Fat Freddy's Drop have things going on. In the run-up to what will be their biggest headlining show in London, at Alexandra Palace, comes this, from the first of two 12' singles featuring  reworkings from well-known producers. The very smooth and able Theo Parrish provides both vocal and instrumental remixes of 'Mother Mother':

(Note the new, not entirely obvious, icons on Souncloud embeds. The above has a shopping cart icon for the sale, while the below has a download icon.)

Freaky blue-eyed soul doesn't get much freakier than the current Connan Mockasin record. And now, the DPTRCLB DJs (it's pronounced "Departure Club", dad), having done a lovely job with Watercolours' 'Pazzida' last year, have pulled off another on-point remix for Connan:

A hip hop classic given an awesome remix. It's one of those needy like-us-on-Facebook-for-the-free-download deals, but it's well worth your time.

And a nice new Aotearoa soul track from Third3ye collaborator Edward Waaka (click the Fan button for a free download):

Meanwhile TheAudience's blues-country-folk chart likely isn't going to deliver any monthly NZ On Air grant winners, but it's probably your best punt for a look at what's going on in that sphere. Things like this, from Christchurch:

And with that, it's time to get moving. Have a good weekend.