I got a little weepy on Tuesday. No, not for the departing  Geoff Robinson, much as I appreciate his fine service these past 40 years, but for Frankie Knuckles, who died suddenly at the age of 59 later that day. Although he's hardly a household name, people who felt it, felt it hard.

Twitter was flooded with tributes and even The Economist published a tribute to "the man most commonly credited as the godfather of house music". So exactly what is all the fuss about this Knuckles guy?

Some context: In 1979, in Chicago, 70,000 drunk dudes cheered as thousands of disco records (which effectively meant any records by black people) were blown up with explosives at a baseball stadium. The white folks got so out of hand that riot police had to clear the field. This is the environment in which Frankie was playing evolving forms of that marginalised music to equally marginalised communities -- black, gay or, like Frankie, both. The actual same city.

The term "house music" itself was coined by a local record store as shorthand for the music Frankie Knuckles was playing -- sometimes rearranged on reel-to-reel tape, or beefed up with an early drum machine -- at the Chicago club where he was the keynote DJ: The Warehouse.

The Warehouse didn't actually play house music, for the very good reason that it hadn't been invented yet. Proto-house music, harder and less musical, was the next step on at Ron Hardy's Music Box club, where Frankie also played.

So what did it sound like at The Warehouse? Red Bull Music Academy put together a YouTube playlist based on the Warehouse Top 50 compiled by Bill Brewster with Frank Broughton for their book Last Night a DJ Saved My Life. The tracklisting is here. It's brilliant. I'd go and dance at a club playing these tunes -- Chaka Khan, Roy Ayers, Gwen Guthrie -- any time.

A few years later, that music, now fully evolved into something new -- house music and in particular the heavy loops of acid house --  leapt the Atlantic and thence became a dominant force in popular music. These days, EDM fills American stadiums -- and two years ago the Chicago White Sox held their first annual House Music Night at the stadium where the disco records were destroyed in 1979. As Brewster notes in his concise obit for The Guardian, Frankie liked to refer to house music as "disco's revenge".

Frankie's passing terminates a great pop-cultural arc. But it also takes a chunk out of my own youth. I first heard Chicago house music in London in  1986 and two years later, house music, as the saying goes, changed my life.

Among the records I bought then and still own is Frankie's 1987 production of an unusual track by a teenager called Jamie Principle that had been kicking around Chicago clubs on tapes for several years by the time it was released:

I still play 'Your Love'. It's beautiful and primitive and one of my favourite records. But it was a 1989 classic that most clearly set him apart from all the chancers with samplers. 'Tears' had what became the trademark Frankie Knuckles sound, with its soft, pulsing bassline and floating piano:

Unlike his founding contemporaries, Hardy and Larry Levan, Frankie didn't destroy himself with drugs. Diabetes eventually got him, but he was always a working DJ and was playing a gig at Ministry of Sound in London only last week. You can download the set he played late last year at London's Boiler Room:

Happily, you can also download the mix of Frankie's own music created and posted in tribute this week by Dimitri from Paris:

You can hear his more recent work on his Soundcloud page (I'm going to buy that Candi Staton track) and most of his many remixes are on YouTube -- often, like this one, originally the spacious b-side of the 12":

But for me, none of them demonstrates his artistry better than his beautiful interpretation of Michael Jackson's 'Rock With You':

Thanks for the beautiful music, Frankie. Thanks for heaven on the dancefloor.

Feel free to post your own Frankie Knuckles  favourites in the comments for this post (YouTube and Vimeo videos auto-embed here if you just paste in the URL of the clip). You may also enjoy this short British documentary about him, in two parts:

And when you have some time, watch all 141 minutes of Pump Up the Volume: The History of House Music, which has pretty much everyone in it:

I've just been pointed to this holyshitamazing short doco by Phil Ranstrom on the launch of the third of the triumvirate of Chicago house clubs, The Power Plant, in 1986. House, it is clear, was becoming the next big thing by that point. It includes a Frankie interview and a live performance by Steve Silk Hurley's JM Silk. Uploaded only this week (the day after Frankie died) and the nearest you'll get to actually being there ...

So, kids, you may be asking "what were you doing while all this was going on, grandapa"? Oh, you, know, hanging out in Vulcan Lane watching art ... 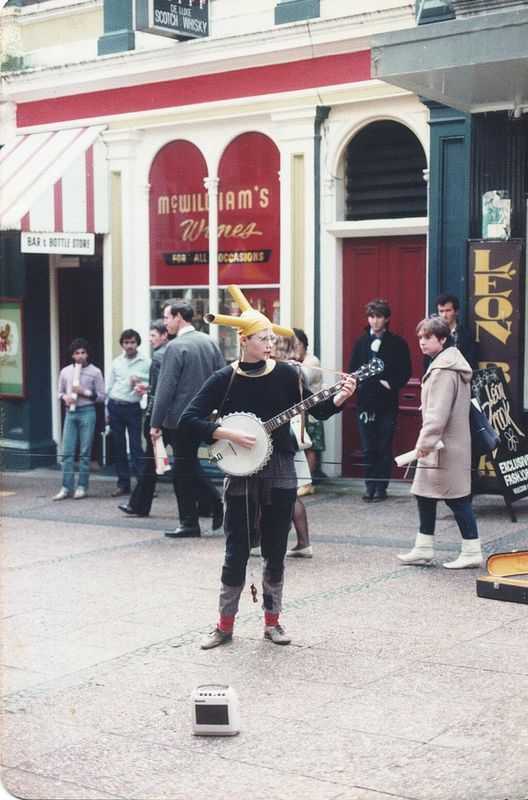 It must be 1984. That's me by the red door, all wrapped up, and that's Ian Dalziel next to me. The performer is Gill Civil, who is best known here for her work in Marie and the Atom, the most delicate and unusual of early Flying Nun acts. On this day, she pitched up oddly decorated in the lane, roped off a space and played a solo work on voice and banjo. I remember at the time thinking how bold it was. Perhaps that's why I look so terribly concerned in the picture.

I was delighted to reconnect with Gill this week via Twitter. She now lives in Canada's Sunshine Coast and, among other things, makes piano recordings for ballet classes. And, of course, yes, she has an arrangement of 'Royals':

A typically amusing James Milne press release heralds the news that Lawrence Arabia will be playing the three Lawrence Arabia albums in full across two night in Auckland and three nights in Wellington at the end of May. You can click through to buy season passes for each centre. I'm looking forward to this.

Also on the road next month, alt-country folkies Great North. They've released this lovely track from their forthcoming new album as a free download on Bandcamp:

And in the Sunday Star Times, Grant Smithies caught up with Flip Grater, who has just begun a national tour in support of the new album she recorded in Paris, Pigalle. It's an excellent read.

Breaking: it's deep in the night, She's So Rad have returned from the disco, made a nice cup of tea/whisky/ketamine and got on the back-to-mine indie groove. It's warm:

At TheAudience, this twinkling little hip-hop instrumental from someone called pxlx. (Why all these short tracks suddenly? Should we blame Lontalius?)

There's more of this mischief going on at his Soundcloud.

Wellington DJ duo Eastern Bloc (it's not just a name -- one's Polish, the other Ukranian) are also in TheAudience's chart with this twitchy thing:

And wowzers. Bobby Busnach has posted an epic 17-minute remix of Donna Summer's 'Love to Love You Baby'. Bobby does his best work with Donna -- and that's the bassline from the O'Jays' 'For the Love of Money', amirite? Get the big fat WAV file before it hits the download limit:

Leftside Wobble dubs up a lesser-known version of 'Cry Me a River' to magical groove effect: