Music journalism isn't really a career for grown-ups, but it can have bragging-rights advantages. When the name of a famous international pop musician comes up in conversation, you may well be able to say, "Oh yeah. I met him." And, to the extent that interviewing someone for 30 minutes is meeting them, yes you did.

So, therefore, I met Bobby Brown one time in London and he told me to stay off the drugs. Well, actually, I didn't know how to wind up an interview I was doing for New Zealand TV , so I asked him whether he had a message for the fans in New Zealand.

Turning, and looking sternly down the barrel of the camera, Bobby Brown said:

Yeah, Bobby Brown really said that. I can't recall the name of the show it was for, but it must have been 1989 and Karyn Hay was directing. If by some chance this otherwise worthless interview remains in the TVNZ Archive, its stunning conclusion should be liberated and excerpted so that people can like it on YouTube.

Then there was the time I met MC Hammer. Countless (well, three) people have urged me to tell this story this week, so I will.

In 1990, I was among the freelance writers on the music weekly Sounds invited to move to Select, a glossy music monthly to be edited by Tony Stewart, who had been deputy editor of NME during its glory days. Tony was quite eccentric and I don't think I ever got on a wavelength with him, but it was an interesting crowd.

Most notably, there was a gangly young Irishman called Graham Linehan, a film buff with, even then, a brilliantly funny turn of phrase. In a scene where people could be a bit cliquey or up themselves, he was just a lovely, friendly bloke. Lord knows what happened to shape him into the hulking, imperious figure who stalks Twitter today ...

But anyway, early on, the chance came up to go to the US and interview MC Hammer, who was then at the peak of his megastardom. The trip had its hitches early on. I got pulled out of the check-in queue at Heathrow and grilled about who I was, who I lived with and what their politics were. Then the flight was delayed and the photographer and I missed a connecting flight to North Carolina, where we had been supposed to hook up with the Hammer roadshow.

After a few phone calls (I'm struggling to believe any of this was achievable before the internet), we were rebooked to fly to Augusta, Georgia for the next date on the tour. I recall arriving at a surprisingly small airport and stepping out into the debilitating southern heat to wait for our ride.

We were booked into a hotel near the venue, a big indoor arena, where I would interview the star. Later, we waited at the arena as it filled up. We might not have been the only white folks in the house, but it felt a bit that way. But while my exposure to black Americans had largely been via urban hip hop artists, this was a different crowd. People were mild-mannered and almost impossibly polite.

Eventually, the call came. We were hustled through the backstage area at  something approaching jogging pace by four huge security guards. Although the word on the tour was that Hammer ran it as a militarily-organised drug-free production, as we passed the dressing room of [support artist's name redacted], another guard knocked on on the door, said "This is [name redacted's] medicine," and passed through a small package. I got the impression it wasn't her asthma medication.

We arrived at Hammer's dressing room and were shown in. There he was -- in a tight, black knee-length leotard, on an exercise bike.

For the whole time we were there, he never dismounted the bike, or even stopped cycling. He pretty much just didn't stop anything. I can't recall much of the content of the interview (the mag is under the house somewhere, don't make me go there), but he reacted positively to a question about Al Green, sex and spirituality: "That's exactly what I'm talking about! That's it."

Although Hammer was pretty much the king of the world at that point, he didn't really pull any star moves. He just talked very, very fast, without pause. I've never done an interview with anyone who was that high without being on drugs. It was a really unusual experience. After 20 our 30 minutes, we were ushered out front again to see him dance for two hours.

I knew what she meant. The handful of times I'd tarried to gather my thoughts had seemed achingly, epochally long -- to the extent that I felt like I'd fucked up a bit. It wasn't until I got back to London and transcribed the tape that I realised they weren't and I hadn't. They were just normal, everyday pauses -- in an interview conducted in Hammer Time. 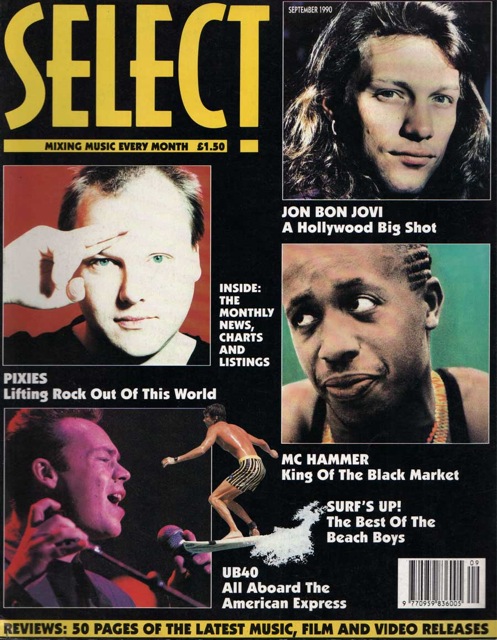 Speaking of interviews, Peter McLennan is launching his book, I Believe You Are A Star, from 3pm Saturday at Conch Records, 115a Ponsonby Rd. Dylan C will play an all-New Zealand vinyl set and Peter promises that the first 25 people to buy the book (only $19.95!) will receive his mix CD of recordings mentioned in the book.

And that's quite a few: Shayne Carter, Tigilau Ness, SJD, DLT and more, all from interviews written up by Peter for Real Groove, Planet, North & South and others. I'll be swinging by.

Earlier in the day, I think I'll try and make the 2013 Music Month Summit at Q Theatre -- or, more precisely, the 'Radio and the Online World' panel at 11.30am.

You may know Nick Dwyer from his work in taking New Zealand music to the world in Making Tracks. Well, he does the cultural exchanges in the other direction too, via Weird Together, his collaboration with Dick Johnson and a bunch of Auckland musicians from all over the map. They've put together a really interesting-looking party called Weird Night Out at Victoria Park Market tomorrow night. They'll be joined by Boycrush and something Jeremy Toy is calling She's So Rad Special Disco Mix, along with many others.

You can check out this fab video for 'Chale' from last year:

And you can download the 'Chale' EP, featuring remixes from Kids of 88 and She's So Rad for free via the Herald website.

Woo! National tours announced this week by The Phoenix Foundation and Ladi6 with @Peace (you mean that wasn't actually the last-ever @Peace show I saw last week? I'm shocked).

I recently mentioned Paddy Fred's 'You Belong', which turned a few heads at TheAudience. Well, the Wellingtonian now has a sweet new EP for $5 on Bandcamp, featuring contributions from Alby Love and Estere.

It's the kind of trippy electric-soul hip hop thing we seem to be doing very well in New Zealand at the moment.

And finally, if you're planning to stay home and have a private party this weekend, Frankie Knuckles has done a lovely 70-minute mix for The Fader ...