The news that Auckland's St James theatre is to open for a wonderful-looking show put together by Nick Dwyer on May 2 cheered a great many Aucklanders this week, but it's important to grasp that the place opening now is not the same as it being saved in the long term.

The main St James room, ground floor only, has been made safe for use – you'll be able to walk through the foyer from April 27 – but there's plenty to do to get the rest of the place compliant. And that will require contributions from the entity that owns the building, Auckland Notable Properties Trust, a couple of private trusts set up to campaign for the theatre's restoration – and Auckland Council.

I spoke to Steve Bielby of Auckland Notable Properties Trust, who seems a really nice man who genuinely wants to rescue the theatre. He was clear that a restoration "won't happen without public support". (I'm independently told that a council contribution could run to about $30 million, but that will depend on the exact nature of the restoration proposal being put together now.)

In the meantime, the Regent, West End and Odeon theatres, including the part which suffered the fire damage that led the whole facility to be closed, will be demolished (they're actually separate buildings from the main theatre) and construction will begin on the 29-storey apartment block to be built on the site. The good news is that in contrast to the original developers' proposal, the consented development won't be built right over the top of the St James, but on the front site.

Steve also had a great story about the Auckland City librarians responsible for the Sir George Grey collection coming over to inspect the site for any items that might need preserving. They noticed quite a few small plastic ziplock bags sticking to the bottom of their shoes.

Steve explained the likely original purpose of these baggies, and the librarians nodded and decided that these, too, were cultural items which ought to be preserved in the collection. So one or to of them are now, indeed, in the Sir George Grey collection. Because history and culture take many forms.

"There are lot of people who want to ignore that part of the St James' history," said Steve of the theatre's dance party days. "But that's really what the St James was for its last 20 years. It's been a lot longer since it was actually a cinema."

There is a great deal to be done before the St James can really be said to have been saved, but everyone I've spoken to agrees that things are on a good trajectory. This is excellent news.

I'm most excited for my friend Andrew Moore, whose recut of of his great New Zealand skate documentary No More Heroes – with a new, fully-licensed Flying Nun soundtrack – has its Auckland premiere at the Point Chevalier RSA on Sunday. 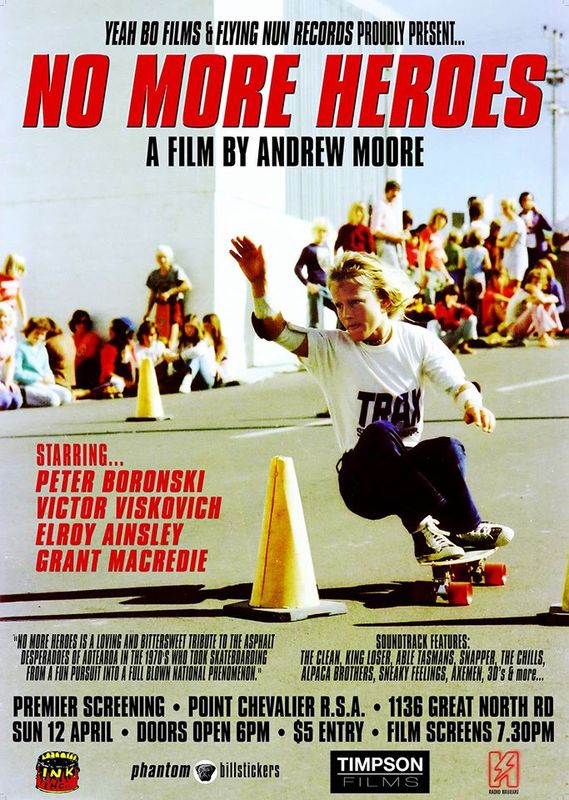 The Grantforgrant fundraiser at Golden Dawn on Wednesday for former Headless Chicken Grant Fell, who has been diagnosed with a brain tumour, looks like being a lot of fun. Stuart Page and I will be bringing back acid house with a Housequake! set around 8pm.

And I'd have urged you all to get in quick for tickets for Shayne Carter's all-seated gig at Whammy Bar on saturday night ... but they've all sold!

Good to see Radio New Zealand's Music 101 not only recording sessions but capturing them as video – and using excerpts like this one to trailer the full session. This is from the Paolo Nutini session that plays in full tomorrow afternoon:

Murray Cammick's ripping yarn for Audioculture about legendary/infamous producer Kim Fowley's adventures in New Zealand is one of the best things you'll read all week. Save some time (it's long) to savour it.

And, with a new version recorded and ready for release by Neil Finn, Chris Bourke tells the story of 'Blue Smoke'.

Click through to the Soundcloud track page for Silicon's social media and website links and a link to buy the single on iTunes.

A little treat for Lawrence Arabia completists. James Milne has unearthed and posted the the original live take of 'Dream Teacher', as recorded in "a bomb shelter in Stockholm" in 2007. Wow:

I do like a good Jose Gonzalez remix and reader Sol Kahn put me onto this. It's a free download in exchange for a social media follow:

Esther Stephens and the Means have an eponymous debut album out this week, in their smooth soul jazz style:

On TheAudience, Wellington four-piece Grozzy have a groove: