It would be wrong to say The Androidss were part of my childhood, but I wasn't all that long out of short pants when I entered the ambit of that bunch of rascals back in the day in Christchurch.

We'd sneak into pubs to see them play, share joints with them at the parties afterwards and generally find ourselves welcomed into the local freak fraternity. We saw them play their epic version of  the Velvet Underground's 'Sister Ray' at the British Hotel in Lyttelton, an environment that seemed to me then, and still does now, not so far from the scenes described in the song.

On one of their infamous trips home from Auckland, they became the very first band I ever interviewed, after the Christchurch Star's music editor Rob White kindly told me to do what I wanted and he'd put it in the paper (they took me to the pub and fed me depth charges). At Sweetwaters in 1982, their guitarist Neil Spence encouraged me to drink so many cups of kava that I had something of an out-of-body experience.

Anyway, I've written a new version of the Androidss article on Audioculture, which is up today. It contains some great stories: from the riotous launch party for their only single, to the making of the video for 'Auckland Tonight' and the night they played for Iggy.

I talked to a number of people for the article, but it also bears a debt to Stuart Page's wonderul oral history interview with former Androidss guitarist Mark Wilson. It was shot in 2016 with financial help from Phantom Billstickers and published a few weeks ago. Have a look at that too:

Julia Deans' long-awaited follow-up to her Modern Fables album is out today. It's called We Light Fire and it's a whole lot more than the "little country songs" she talked about at the showcase that began the long run-up to the album last year. While her first album was full of indoors thoughts, this one looks outward. The sonic pallete is varied, she's singing better than ever and I'm looking forward to seeing her open for Marlon Williams at Auckland Town Hall at the end of the month. (She's playing the whole tour)

We Light Fire is on your favoured streaming service and if you want to buy high-quality files (and directly support the artist) here on Bandcamp for $15.

The clever and thoughtful Anthonie Tonnon is taking his thing to the stars. Well, okay, to the Planetarium at Otago Museum, where he'll present five shows from Thursday July 12 to Saturday the 14th. The performances, centred on the New Zealand-made Synthstrom Deluge he uses in live performances, will take advantage of the Planetarium's surround sound and celestial display to present what's being billed as a 360° experience. Tickets go on sale on Monday from the museum website.

If you can't get to Dunedin, you can always stare at this cheesy promo pic and dream of the stars. 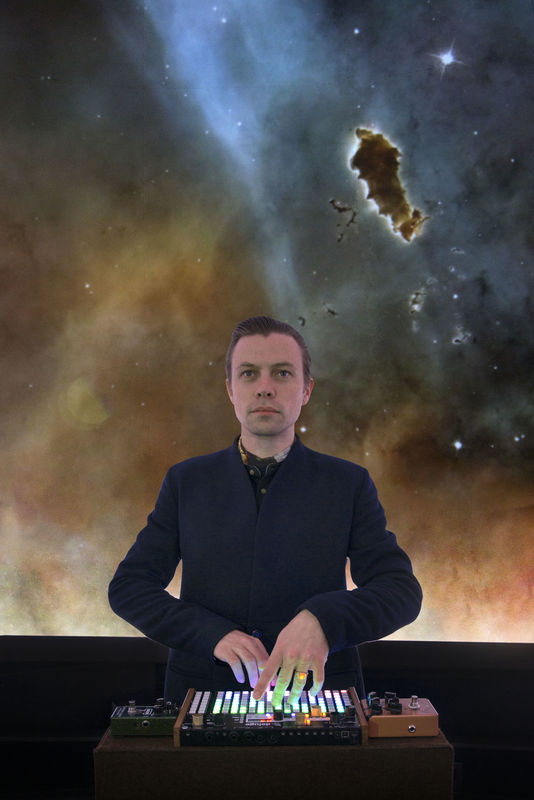 More music industry data journalism from Gareth Shute: he listened to a whole bunch of radio stations during New Zealand Music Month and wrote up what he found about how much local music they played for The Spinoff.

The results probably won't surprise you too much, but I was impressed by The Edge managing 25% local content (around a lot of blathering by the hosts) in the hour that Gareth logged and disappointed by The Rock. 0%, The Rock? Really?

John Baker, who released the wonderful Heed the Call compilation of Aotearoa funk and disco, has been back to the crypt and emerged with a refreshed version of Wild Things, his 1992 garage rock compilation. The centrepiece and totem of the whole thing thing is The Bluestars' 1966 'Social End Product', which John rightly tags as "New Zealand's first punk rock record".

This had the affect of reminding me that I interviewed The Bluestars' John Harris in 1999 for an Unlimited magazine story on rockers who'd gone into business (he was a co-founder of Greenstone Pictures). So here's that:

Formerly:Singer, guitarist and songwriter with Auckland garage band the Bluestars, 1964-67, the first New Zealand group to sign to the mighty Decca label. "I was working as a reporter on the Auckland Star at the time. But my real life, my all-consuming passion, was the Bluestars. I burned the candle at both ends for four years.

"About a third of our repertoire was our own songs, which wasn't very fashionable in those days. Everyone wanted covers. And we were fastidious about them - we even listened to the intake of breath by John Lennon in the middle of the chorus of 'Girl', for instance. It was ridiculous. But we were really interested in our own songs."

Fondest memory:"Just the closeness of the group. I always say to people what I remember most is the tap on the top of the cymbals - one-two-three-four-CRASH … and this wall of sound going over the stage and shooting up your body and through your instruments. That's a buzz."

How has rock 'n' roll helped what you do now? "What I learned then was the value of teamwork - and of knowing that you're there for an audience. They're the ones who pay for you. You need to listen to them. That relationship can be a buzz - and it's the same with what I do now, making television programmes. The audience is who we're doing it for."

Do you play now?"No. I recently bought a black Fender Stratocaster, and it sits in the spare room and the strings have gone rusty. But it's nice to know that people care about what you did - it's a sort of validation. The people I feel sorry for are the ones that don't have a present, only a past."

There's more on the compilation in the official promo video:

John Baker will be on 95bFM's Dirtbag Radio from 7pm on Monday, where they'll be joined by members of several of the bands on the record.

Kody Neilson's new album Birthday Suite, is out today – and today and tomorrow it's available for $40 from the pop-up store in St Kevins Arcade, Auckland. The vinyl is white and so is the shop.

And yes, that is Mr Matthew Crawley on the retail counter there.

Graham Reid has been vsiting his own archives and republishing past gems on his Elsewhere website. This 1998 interview with Patti Smith is still a great read.

New Zealand Musician is doing its 20 bands in two hours things for Music Month again this year. This time it'll be streamed live with the asssitance of the film department at SAE Institute Auckland and Depot Sound Recording. 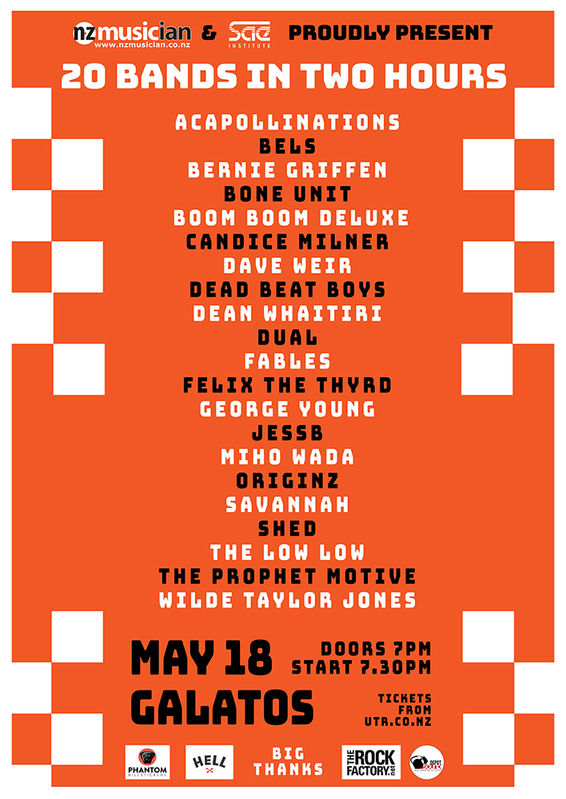 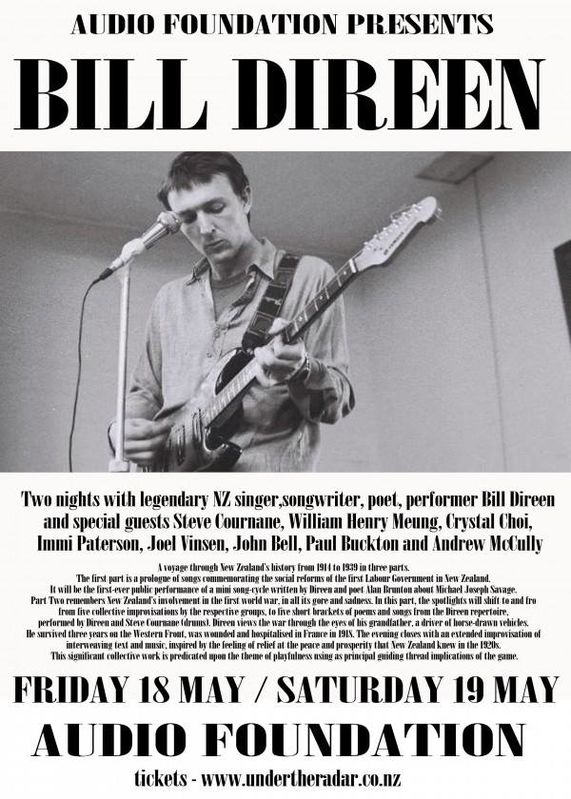 How about a sweet High Hoops mixtape to keep you company in the kitchen this rainy weekend? Hey, here's one! And it's a free download!

Loving this from Mark Rae. It's from his fifth volume of hip hop soul and disco edits, which is here on Bandcamp and a very groovy thing indeed.

And finally, this rib-rattler from Auckland's Dub Terminator, which comes from an entire album of crucial cuts compiled by Dr. StrangeDub (Michael Rose) and DJ Baby Swiss (Elmar Romain), hosts of the long-running (22 years!) Minneapolis radio show the Echo Chamber. The album is here on Bandcamp, it extends to 35 tracks and it is completely FREE to download. You really cannot moan.