That's the vibe captured in this nice video from The Wireless about Wellington's Eyegum Music Collective:

There's a short story here too.

I remember once sort of gatecrashing an advertising-crowd party in Ponsonby with my buddy Andy, because Voom were playing. Although we knew a few people there, it did feel a little awkward not knowing the hosts. And when Andy, who had forgotten to eat all day, staggered to his feet quite the worse for wear from beer and doobies to take a guest vocal on the second run though 'Beth' ... well, you could literally hear the muttering and tut-tutting in the room.

But after he'd got himself to the mic, from the moment he sang "You know how I feel ...", it all started to change. He nailed it. He nailed the high part – even Buzz doesn't do that some nights. And by the end, the whole room was letting loose and singing along with him. You couldn't have scripted it better.

But, to be fair, he did know the song, having made the video ...

Most of us know the high-level story of how the MP3 revolution caught record companies napping, and how long it took them to realise that the era when pressing CDs had been like printing money was over. But The New Yorker's feature about Bennie Lyndell Glover, The Man Who Broke the Music Business, is the most interesting explanation I've seen of what actually happened behind the scenes.

Glover worked for years at a CD plant, back when such plants churned out hundreds of thousands of shiny high-margin discs a day. He didn't steal CDs, but plenty of other people did, and he obtained them to supply a big IRC warez group, thus securing himself premium access to the video files on the group's servers – so he could bootleg and sell movies. He had to keep his for-profit bootlegging a secret from the rest of "The Scene".

The Scene went on for a long time, under the direction of "Kali", a mastermind who lived with his mother, didn't have a life and, in the end, wasn't even convicted in court. It's the real revenge of the nerds.

New on Audioculture this week: Keith Newman's profile of Gary Thain, the Christchurch-born bassist for the oft-mocked but at the time very big Uriah Heep. It's ultimately a tragic story – Thain died of a heroin overdose at the rock 'n' roll age of 27 – but it's hard not to smile at language of his death notice in the Press: 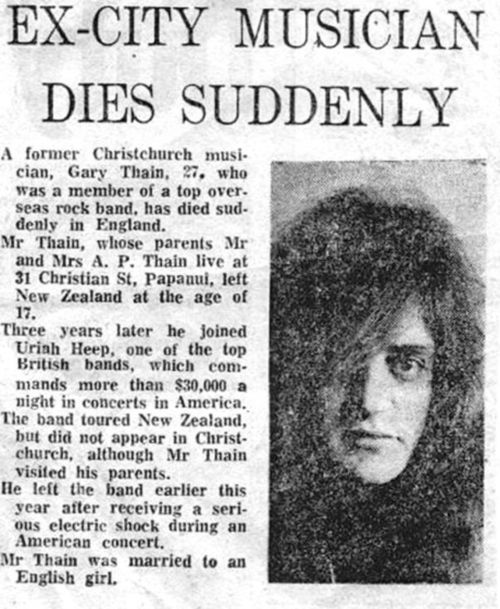 Revisiting a couple of things ...

I wrote a few weeks ago about the "unforced craft" of SJD's new Saint John Divine album. I finally got to see the band play the new songs last saturday and it bore out everything I'd thought about the record. Sean Donnelly has been a nervous performer at times, but he and his band were notably relaxed and in command of everything they did. It was a tremendous show, one aided by the great sightlines and acoustics (it's the five-metre drapes) of The Tuning Fork.

In that same post, I also mentioned Anthonie Tonnon's Successor album. I could write more now, because I've been playing it semi-obsessively since. In the past Tonnon could have been thought merely clever, but now he has created a rich and sympathetic musical setting for his words. One of the things I like about it is that that it's a politically aware record that never once shouts a slogan. There are worse ways to spend $12.50 than to give it a try, believe me.

Oh, and I'm definitely planning to stay up late for Nick Dwyer's Weird Night Out extravaganza at the reopened St James next Saturday. Further announcements coming in the next week, I gather.

Darren Watson, fresh from securing more freedom for everyone's speech with the High Court win over 'Planet Key', has a new video ...

Jordan Arts (aka High Hoops) and some mates "recorded some tracks at a cliffside abode". He says there's an EP where this came from, and if it's like this, I'm all ears:

Another peek at the fothcoming Unknown Mortal Orchestra album:

And another taster from Janine and the Mixtape's next EP, quoting DMX:

And because it's Friday and you'll be wanting to dance in your kitchen, this fucking brilliant edit of good old Wild Cherry's immortal only hit, 'Play That Funky Music'. Free WAV download. Enjoy!