I keep meaning to mention Flying Out. It's basically the new retail wing of the refreshed Flying Nun, and as well as the Nun catalogue, it sells selected releases from Arch Hill, Muzai, Fishrider, Captured Tracks and others.

It ships in multiple formats, from vinyl to lossless (yes, lossless -- in WAV or FLAC) downloads, and there are gems like David Kilgour's Here Come the Cars, which, amazingly, became available on vinyl for the first time recently, courtesy the very interesting Minneapolis label De Stijl Records.

The same label has also re-released Peter Jefferies' often-lauded (but less often seen) album The Last Great Challenge in a Dull World. They've even put a track up on their Soundcloud account:

I'm currently waiting on the seriously sweet new vinyl reissue of The Clean's Vehicle (after I get it I'll bore you here with some stories about it, etc) and the Bird Nest Roys double LP (so many stories, etc).

In a world where online music retail still generally isn't what it out to be, I think that shops like this, thoughtfully uniting communities of interest, are going to be more and more relevant.

PS: If you register as a customer, your confirmation email includes a link to a free eight-track sampler including tracks by The Clean, Bird Nest Roys, Skeptics, Sharpie Crows and others. Sweet.

This is stone-cold amazing. Apparently, it's the vocal-only stem from the original recording of 'I Heard It Through the Grapevine', but I don't understand how that relates to the TV studio setting in which Marvin is shown in this video, or how the a capella came to be isolated. But anyway, here are some chills down your spine:

UPDATE: Following up a tip from reader (and first-time commenter) Lauren Anderson, I've worked out that the clip is from an obscure DVD called Real Thing: In Performance 1964-1981, and it's one of seven a capellas isolated and re-synced to original TV lip-sync performances. Amazing.

Lorde has given an interview to the Huffington Post and in the process given the impression that, at 16, she's more lucid, thoughtful and centred than most adults I know. If she does go on to have a significant international career, it will be these qualities as much as her musical and writing talents that get her there.

The Naked and Famous are back, with a new album, Rolling in Waves, due on September 16 -- three years after Passive Me, Aggressive You. That first abum was in large part a home recording, with finishing touches in the studio, so it'll be interesting to hear how this one sounds. On the evidence of the preview single, not all that different, but bigger and more shiny:

From out of the new Dunedin guitar scene from whence sprang Trick Mammoth, the terribly-named but quite charming Prophet Hens:

"We will jangle the shit out of you," they say, "and you will thank us."

Sola Rosa (aka Andrew Spraggon) has posted a really fine free mixtape of his work, which is not just a good introduction to what he does, but a nice accompaniment to whatever you're doing:

Go here for the download link and track listing. If you like it, you can buy his back catalogue over on Bandcamp, including this year's "refreshed" version of his 2001 debut album, Solarised.

Some of you may recall Chris Sheehan from his days as the groovy, gothy guitarist in The Exponents. I used to see quite a lot of him for a while. He lost touch with most of his New Zealand friends after he departed the Exponents in London (where he went on to make several well-received albums as The Starlings). He and his wife went on to found an animal-rescue business. And now he has become back to light in a very sad way. Both he and his wife are terminally ill -- Chris with melanoma -- and they have little left. But Chris wants to make one more record and recently launched a Fundrazr appeal to help him buy a laptop to work with. The response has been great, but you can still donate if you'd like to help.

I really like the way Audioculture is developing -- at the same time as gaps are gradually being filled, existing entries are becoming richer. This story from Mark Clare about the background to the Newmatics' 'Riot Squad' is an excellent example.

Garth Cartwright's new Days of Rumba and Reverb is an account of two (in)famous Auckland pub venues, written with real affection and illustrated with photographs, video and some great posters. (I've just written a similar entry on Christchurch's Gladstone Hotel, which will be similarly accompanied.)

A new story by Andrew Schmidt on the early days of Auckland's punk rock scene.

A little shake-up of the Tedy Pendergrass classic:

And a downloadable edit of Bobby Bland's 'Ain't No Love in the Heart of the City':

I actually prefer this version:

Which is available on a nice new compilation of edits on Bandcamp.

It's highly likely that you'll hear one or more of these when my turn comes up in this guest DJ season at Auckland's Racket Bar: 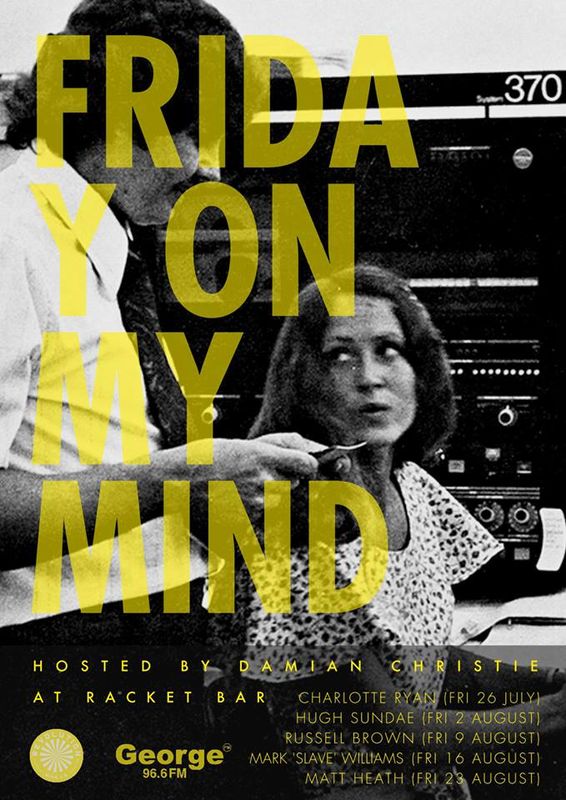 It's a mainstream media showdown!

And, finally, Voom and The Eversons are playing the Portland Public House in Kingsland this evening, and I do not intend to let my goddamn cold stopping me enjoying that. See y'all there, perhaps.