It must be all of two years since Shayne Carter undertook to invite me into his former Grey Lynn man-cave and play me the new solo album that had sprung from his immersion in classical music. He was enthusiastic about breaking free of his rock guitar persona, teaching himself piano and simply doing something different.

We never did get in that listening session; it seemed the record was never quite ready to share. Shayne is nothing if not a perfectionist. But late yesterday, this appeared on Bandcamp. It's a taster for the forthcoming album Offsider and features Shayne on vocals, piano and guitar, Gary Sullivan on drums, Nick Roughan on bass, Tamasin Taylor on strings and Richard Steele on bass – and it's moody as hell:

The lyrics are pretty interesting too.

Also fresh on Bandcamp, Cardigan Bay, a new solo album from Blair Parkes. It, too, was recorded in a man-cave, but in New Brighton. I can testify that things get pretty chilly in that shed, but there's something about the way Blair records that produces a lovely, warm, thick sound.

Nice to hear my buddy Andrew Moore guesting on one of the tracks on his way through town too.

Those who live with me can testify that I love nothing more than a good music documentary. So I've been greatly enjoying Soundbreaking on Prime, its occasional flushes of American-centrism notwithstanding. (And how could they go straight from mentioning disco to Saturday Night Fever?) I enjoy the creators' willing to transcend genre and draw unexpected connections.

When there's nothing on the telly there is, of course, a wealth of older music documentaries to be found on YouTube. I suspect they're there for largely the same reason we miss out on so many on TV – music licensing.

It's difficult and expensive to license individual works, territory by territory, for broadcast distribution. The BBC might have a blanket music license but most broadcasters it might sell to do not. On the other hand, YouTube Content ID works very well in identifying master recordings. It tracks literally millions of them. And while record companies and publishers may justifiably complain about the fairly meagre returns from the system, they're not taking them down.

So I can still watch this 2014 UK Channel short doco about jungle, the precursor to drum and bass.

I'm not the world's biggest D&B fan, but I was still in London in 1991, when it was all fermenting in local raves, and even back home here I was willing to play those frantic records on the radio when some other DJs were turning up their noses.

Like all foundation dance scenes, jungle was about community and it offered something that its adherents felt they'd never really reclaim once it passed. But jungle is distinct in that it was actually forged in Britain, rather than discovered and popularised the way acid house was. And it was multi-racial in a way that American scenes generally have not been.

This 1994 look at jungle from the BBC programme All Black is a fascinating follow-up to the Channel 4 one. It features quite a few of the same faces, looking younger and slimmer. And although the programme, understandably, initially focuses on it as a black form, it opens up to the idea that jungle is genuinely multi-racial. The interview in which one of the scene's stars, UK Apache, talks about his ethnic heritage (Arab, Asian, African) and how jungle, as a British form, has made him proud to be British, is remarkable.

From there, of course, jungle moved into the many flavours of drum and bass and eventually to dubstep. The sounds it spawned underlie a good deal of American popular music. Those kids from London, with their crazy sped-up breakbeats, had more of an influence than they could have imagined.

The Auckland heritage consultancy Reverb has offered a fascinating glimpse of what's being done to preserve the most important parts of the St James Theatre as the venue is incorporated into a new residential tower. There's a collection of work-in-progress photos here on Facebook.

But perhaps the most remarkable is this glimpse of a work most of us didn't know existed: 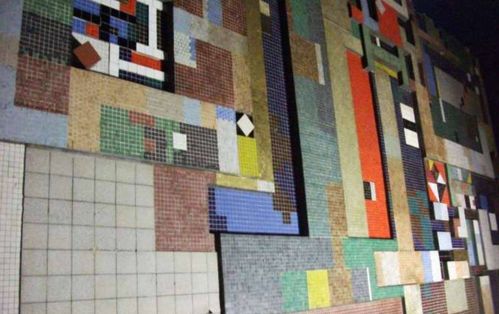 "This wonderful 1957 mosaic by Maurice Smith is being removed from the Odeon Cinema wall (which is being demolished) in a painstaking process, including the individual documentation of each tile.... Lots of thanks to those involved in this process, which is being filmed by Margot McRae as part of her ongoing St James Theatre documentary."

The important thing to remember – and I have to keep saying this – is that all this careful work could be for nought if the government doesn't come to the party with its share, which is likely to be around $10 million from existing heritage funding, towards a $60 million total restoration cost, with Auckland Council having committed in principle to $15 million. C'mon Maggie Barry!

Quite a few things on in Auckland tonight.

Yoko Zuna follow up their new all-star EP with a show at the King's Arms.

And there's a rather good dance party in the unlikely surrounds of The Winchester, with the excellent nu-disco DJ Alkalino leading a solid local bill including Bevan Keys.

The fact that Alkalino is playing in some old clubrooms says a bit about the local club infrastructure, but that gets a fillip tonight with the opening of Impala, in the Shortland Street basement that once was Code.

It's the brainchild of Daniel Farley and Reuben Rivers Smith, who say they've invested a lot in the refit and a new sound system. I went along to the launch party on on Wednesday, which was a slightly odd affair – there was no sign of the promised performance lineup (including Boycrush) by the time I left, just some pretty terrible DJing. And the vaunted new sound system sounded to me like it needs some tuning. But the layout of the place itself is very cool and there's a big dancefloor. I hope it goes well for them.

Just the one this week, because the time's getting on. Local lads Leisure get a nice remix:

And finally, because it was in Soundbreaking and it made us think, well, that was a good song: