There haven't been all that many new albums that have really turned my head this year, but I'm pleased to say that I've found one that seems destined to dwell amongst my all-time favourites. It's been six years since Chan Marshall last released an album of original Cat Power material, but Sun makes the wait worthwhile.

It's tough and soulful and departs from her earlier work in a way that, as this NPR story suggests, might actually upset a few fans. She actually walked away from her original album recordings because they sounded too much like Cat Power -- and started working with drum machines and synthesisers. No, it's not her Tron and it's not exactly a dance record, but it's a remarkable act of artistic refreshment.

You can play, buy or just download the opening track, 'Cherokee' and a gorgeous Nicholas Jaar remix:

You can also download another track, 'Ruin', from the official Cat Power website. But really, I'd recommend just getting the album.

PS: Cat Power for Laneway 2013? That's what they're saying. Please let this be true.

We'll see soon enough -- the first lineup announcement is on the 26th of this month. Dates were announced today -- Auckland is January 28. The venue is Wynyard Quarter again and the promoters are promising a reconfigured site with more food, bigger bars and more shade.

I'm delighted to see that Amplifier has the Herbs catalogue available for digital purchase -- and particularly so because that catalogue includes their absolute classic debut mini-album What's Be Happen?.

This dreamy little number from Wellington on TheAudience:

A solid offering from "North Side of Auckland" rapper SikeOne:

There's a lot to unpack in 'Jam This Record', the video for which arrived recently on NZ On Screen:

NZ's first house record was a one-off studio project for Simon Grigg, Alan Jansson, Dave Bulog and James Pinker. With a nod to UK act MARRS' indie/electro hit 'Pump up the Volume' — and a sample from Indeep's 'Last Night a DJ Saved My Life' — it briefly featured in the UK club charts. The independently made music video borrows the record's original graphics (by novelist Chad Taylor) and marries them to a mash-up of 1960s black and white, music related archive footage (includingC'mon) with the occasional novelty act and politician added for good measure.

And this is the perfect week to drop it in the blog -- because Simon Grigg himself will be Playing Favourites with stand-in host Toby Manhire on Radio New Zealand National's Saturday Morning show tomorrow. That's such an enticing prospect that I will forgive you for time-shifting tomorrow's Media3. I'm like that.

The Checks have formally announced their break-up and former manager (and the drummer's dad) Phil Moore has just posted this brilliant pic of them playing at the Masonic in Devonport, when not all them were old enough to even get into the pub. I think I was there that night. It smelled like teen spirit: 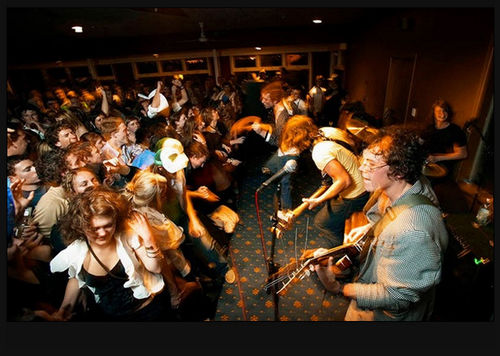 And finally, my boy and I are going to the Arch Hill night at the Wine Cellar and Whammy Bar tonight. See you there, maybe.