The residents of Christchurch can be, for understandable reasons, sensitive about some of the trash talked about their city. And sometimes (cough-Scribe-cough) it's the city's own who do the worst of it. But let me say this: when it comes to music, Christchurch is weird, in a good way.

Yes, it's the city that gave us the Narcs, the Newz and the Feelers. But that city's persistent bohemian fringe also gave us The Gordons, The Bats, Bill Direen and The Terminals -- in other words, the music that music nerds and collectors the world over are more interested in now than ever.

At a lower-fi level, there's also Teenagers From Outer Space: Thirteen Christchurch Nuggets 1980 - 1983, an informal compilation of crazy-rare Christchurch craziness put together a couple of years ago by the mighty Andrew Schmidt, for the Switched Out blog. As I have observed in comments, there's one track-titling error, and the Vauxhalls track doesn't compare with the dirty-assed R&B garage outfit they were live. Hey, hey. News Trivia Point: The Vauxhalls went to school with future GCSB chief Ian Fletcher! I demand an inquiry!

It appears that not much has changed. Last week, I mentioned Christchurch's Salad Boys. Joe Sampson from that band has been in touch with news of a new compilation from his label Melted Ice Cream. It includes the magificently-named Christian Rock with the equally magnificently-titled 'We'll Meet at Riccarton Mall to Fuck'.

And the Tall Dwarfsy (although that surely can't be a real tape loop with actual tape) X-Ray Charles:

You can download the whole thing for free from the Melted Ice Cream Bandcamp. The page includes links to all the artists' individual Bandcamps, and you can read an interview with Joe Sampson over here on Under the Radar.

Joe also has a release tour planned for the compilation, and this attractive poster for Salad Boys' own tour: 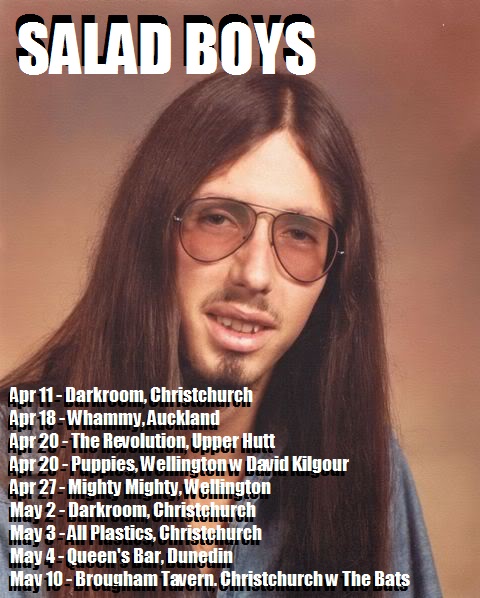 The Mighty Mighty and Darkroom gigs double as release shows for the compilation, with a similar date at Auckland's Cassette 9 pending conformation.

On a different tip, the first I heard of Suren Unka was the incredible live mix he did one day on Keegan Fepuleai's Just Sayin' show on Base FM. It was hard to believe that this kid could pour out this beautiful, fluid techno -- and harder still to believe that his other musical project is as drummer in the pop-punk band Beach Pigs. Kids these days!

You can download the 'Alice' EP here at his Bandcamp.

Over at TheAudience, Martyn Pepperell is frothing about Unmap, whose 'Good Love' is a wild, bleepy slab of robo-soul:

This week's remix cheese -- it works! -- from Soundcloud: