One of the vexing things about liking new music is that you're supposed to stop doing it after A Certain Age. Or, at least, to transition to something more age-appropriate. Sure, I can throw the bangers at you here, but when the music is live, you get used to being the oldest one in the room.

So I'm always pleased to see Jean Hughes making her way back from the mosh pit. I've known Jean since she helped us with our younger boy's education after the system let us down – she saved us, basically. She's also a Public Address reader, and happened to win our ticket giveaway to the recent John Morales club gig (which, to be fair, was full of people declining to act their age).

I asked her there what her Auckland Laneway picks were and she reeled them off. And I thought, well, she's better versed in this year's lineup than me, so I asked her to jot down her tips for the blog.

For early arrivers, Jean recommends starting off with Leisure: "I like their sound and it's a relaxed, dancey way to start the day – with a 2016 hipster edge."

Then it's over to over to East India Youth: "I like him and it's still nice and mellow to keep the day going in the right direction. And Diiv - I kinda like what I have heard of them, and now we are stepping it up a notch. It can be a bit messy and quite reminiscent of something early 80s  – possibly The Raincoats, but I could be wrong (it is late and a nice wine in) –  or mix this with Scuba Diva, though I'm most probably able to see more of him locally."

Then it's over to "Thundercat: very, very niiiice – voice a bit weak, but hey, everything else is great or even better than that. Followed by Oscar Key Sung. I like this  – nice, with the right bpm for an older girl.

"Most probably then a meal and break, while I gear up and get prime position for Courtney Barnett, a fave rave."

Then, says Jean, "it's on to a very hard evening – hard choosing, that is. Beach House vs Grimes – oh me oh my. Beach House first for a bit  and then scamper over to Grimes – I like her and her feminism appeals to me too." [UPDATE: "I have decided on consultation that Beach House is out and Grimes is in. I think she is a very exciting female artist and will be just perfect for that time of night."]

"SOPHIE or Churches. I think SOPHIE may win if I can get into  the Thunderdome – so poppy, dancey. And a friend saw him at a Rough Trade gig and highly recommends him as original. I do like Churches too – good beats and a woman with attitude in the forefront,  so maybe a half and half if I can … oooh, the choice."

And after all that …

"To finish off in style, it has to be Flume for me."

I'm not quite decided on my approach for Monday. I want to see Leisure, Lontalius and Nadia Reid, but that makes for a loooooong day until the night-time artists I also want to see. (Jean recommends a nana nap.) I'll be seeing if I can get into the Thunderdome for SOPHIE on Jean's tip (hopefully all the kids will be at Churches).

Anyway, if you happen to spy a woman with fetchingly wavy grey hair giving it heaps down the front at Courtney Barnett, do feel free to bid hello to Jean. We're all in this together, you know ....

One place I was in no dager of being the oldest guy in the room was last night's show by Gillian Welch and Dave Rawlings at The Civic. "It's like the Invasion of the Baby-Boomers," I remarked to Fiona, whose Christmas present going to the show was. It turned out to be a very good Christmas present.

I'd always thought of Welch as a solo artist, but their show really underlined how musically entwined she and Rawlings are. His high harmonies, wrapping behind and around her pure lead vocal; the way she played rhythm or sometimes just banged on the top string of her 1956 Gibson acoustic while he took a lead on his famous, unusual 1935 Epiphone archtop. It's as much about what they do musically for each other as it is what they project out.

They're also very funny. Suffice to say that when they finally left the stage – after two standing ovations and a couple of encores – I think everyone there felt they'd experienced something special.

A while back a few of us helped out Irene Gardiner at NZ On Screen with suggestions for New Zealand songs whose titles referenced days of the week. The resuting video collection, Any Day of the Week, is up now and features the Suburban Reptiles, Kirsten Morrell and more.

But just as interesting is the list of songs we came up with for which no videos exist:

'She Left On A Monday', Bic Runga:

'I Can’t Get Sunday Out Of My Mind', Chapta

'Every Day is Sunday', Rangi Parker

"I sent the Screaming Meemees to Avalon to make a video for 'Sunday Boys'," explains their then-manager, Simon Grigg, "and they managed to convince Peter Blake to make one for the flip side ['At At'] instead. RTR showed a pic of the band when it went top 10."

Who'd be a manager?

One of the joys of the much broader access to music in the internet age has been the rediscovery of non-Western interpretations of Western popular music. You've got your psych-rock from Thailand and your Ghanaian disco and ... well, it's still happening. Thanks to Pete Darlington for the tip on this story on the rise of death metal in Africa. Some cool pics there too.

You may have caught the news recently about the content of the Old Friends website being rescued by the National Library's web harvesting programme after Trade Me decided to close it down. It's but one of many stories of cultural rescue conducted via the web harvest. In Audioculture, Sholto Duncan, the web archivist at the Alexander Turnbull Library, surveys some of the lost music websites of New Zealand, from Mysterex to Wildside.

And further to its mission to capture the broader culture around our music, Audioculture also has a profile by Arthur Baysting of the legendary comic artist Barry Linton. 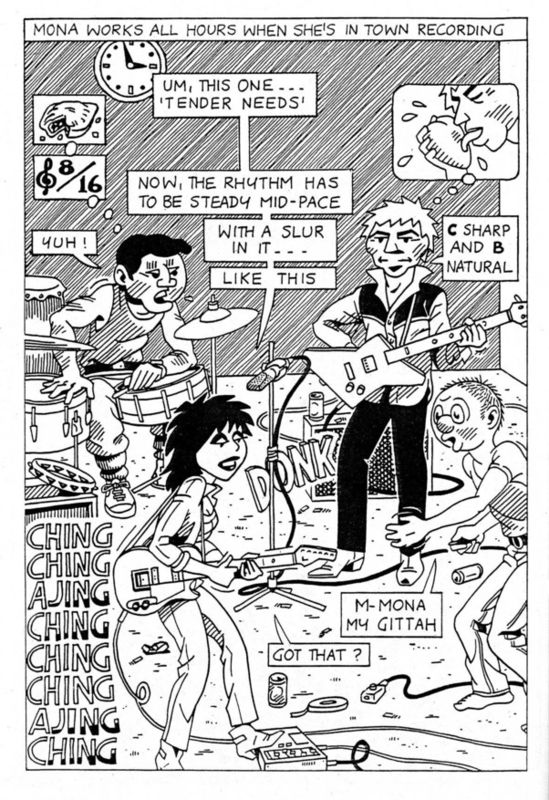 I have an unusual DJ gig on Sunday: I'm spinning some tunes before and after Labour leader Andrew Little's State of the Nation speech. The event is a summer family picnic in Albert Park and I'll play a strictly-vinyl selection with an emphasis on New Zealand music. First set, noon-12.30 before Caitlin Smith sings, then for an hour after the speech concludes at 2.30.

There are several new things on the wires from Laneway artists out this week. Firstly, another beautiful, languid tune from Lontalius, as a taster for his forthcoming debut album, I'll Forget 17.

A brand-new Flume track, with Vince Staples and Kučka. This would seem to bode well for a first-time Vince Staples guest spot in the Flume set on Monday:

And Jordan Arts of Leisure has this woozy-cool new track in his High Hoops guise out this morning on A Label Called Success:

And what's that? You plan to be dancing in your kitchen tonight? Well, you'll be needing this free download then, because it's goddamned irresistible: