Okay, here's one I'm gonna claim: getting those two grand old friends Simon Grigg and David Herkt together at a party. Because after x number of beers, that led to David writing for Audioculture. And how he has written. David's latest is a Scenes entry on the Parnell punk crowd, 1978-79, whose finest hours were sometimes in the daylight, at the "matinee" shows at the Windsor Castle:

The Windsor closed at 11pm. Beers were on tap, 62 cents a jug. A pack of Winfield 25s was 64 cents and they could be smoked inside, ashtrays on tables. Boot girls close to the stage, in a tight group, their styles later to be transformed and recycled to the next century’s English haute couture, but presently op-shop stuff chosen with discrimination and particular taste. Neat suburban boys in their weekend punk at the back of the venue, ripped T-shirts and passé safety-pins. Black visored military caps. Yvette Parsons in go-go boots and a vinyl skirt. Adolescent acne worn with a scowling flourish. Straight-legged trousers. Gym-shoes or army boots. Art-school mingling with dole-queue. Proud Scum’s  Beagle Boys sweatshirts. Nick Hanson of The Spelling Mistakes slowly stripping down on stage, mid-song, to reveal white Jockey undies. Fingerless gloves. White shirts with torn-off sleeves. Black eyeliner or butterfly-wing smear. Pinned pupils from cheap heroin. And all so very, very young.

David's short essay is effectively a text for the Sara Leigh Lewis photographs published on Audiocculture last month -- and happily, it's accompanied by more of those images, including this one: 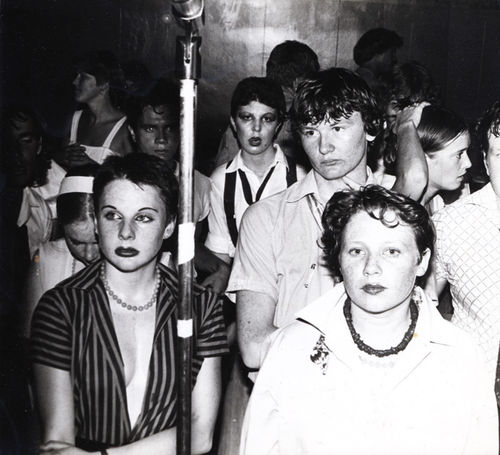 The punk on the left is the daughter of a Cabinet minister. You'll have to read David's piece to find out what became of her.

I am (in case you couldn't tell) extremely happy about this kind of thing being published, because it's both an important story of who people were and a record of how the city itself used to be. And it's a kind of official recognition that it's appearing on a publicly-funded project. It's history, motherfuckers.

Over at the future-history site, there's this. Comparisons are odious, but there's a bit of the James Blake about it.

This is kind of croony and nice out of Christchurch:

And hey! Here's one of my favourites from the Salad Boys album, available as a freebie download if you click through. It sounds like a lost Bats track without ever being a pastiche.

If you like that, there's the whole album for five bucks on Bandcamp.

Okay, I need to get this off my chest. I had a fair bit to say yesterday about Simon Sweetman's review of Lorde's The Love Club EP. But it's probably worth summarising what the problem was.

1. No one has to like the music. I didn't think it was stellar initially myself, but I warmed to it, in part through the many remixes of the songs. I think she's a really fine lyricist -- the text of 'Royals' is a very sharp critique of pop culture itself. Some days I can't get 'Tennis Court' out of my head. I thought perhaps half a dozen of the songs she performed on Saturday night sounded like really good tunes. But that's just me, obviously.

2. Sweetman claims: "She made this music in her bedroom at home – alone, went the original lie." Citation needed. As I understand it, what happened was this. She was spotted singing by at the age of 12 by Universal Music New Zealand's Scott Maclachlan (he saw a video of her performing in a talent quest), and signed to a development deal the following year. It seems she was signed as a singer -- no one knew she was a songwriter until she worked with Rikki Morris, who asked her if she wanted to write songs and showed her how to do that. (In retrospect, perhaps it shouldn't have been such a surprise, given that her mother is a poet and she represented New Zealand in the international Kids Lit Quiz at the age of 12, at which point she told Jim Mora she thought she'd read about 1000 books.)

The songs on The Love Club and , subsequently, her forthcoming album, were written with Joel Little at his small, owner-operated studio in Morningside, Auckland, from late 2011 onwards. I'm not aware that anyone has ever claimed any different. That seems to be just some bullshit Sweetman has made up.

The Love Club was released as a free download on Soundcloud last November. No, it wasn't trumpeted to the high heavens. Why would it be?  I heard about it via a friend who knows the family. But two things happened, independently.

Firstly, people kept downloading it. She gave away 60,000 copies before the record company decided it might be an idea to release and sell it, whereupon 'Royals' went to No.1 in the local chart and stayed there. No one expected all this to happen, or certainly not so quickly.

Secondly, a man called Jason Flom heard the EP on Soundcloud and contacted Universal by email. He heard something, and when Flom hears something, people pay attention. He has signed Jewel, Hootie & the Blowfish, Matchbox 20, Kid Rock, The Corrs and The Blue Man Group, worked with Lily Allen and the Rolling Stones and more recently discovered Jessie J and Katy Perry.

You might not like all of those artists (I certainly don't), but you can see why he's regarded as something of a seer in the business. Some time this year Universal signed a deal to release Lorde's records internationally with Flom's label, Lava Records. Did Big Music come in here? Certainly. Flom has influence and money, and that wrap-around on the front of Billboard probably cost about $500,000. But even Jason Flom can't make radio stations play records, and the way 'Royals' has gone on US radio is simply extraordinary. Country stations are playing it.

None of this was actually in the plan. Universal, mindful of her age, had planned to take it fairly quietly this year. But do you walk away when it seems something special is happening? Of course you don't. What is important to know is that Lorde has a close, stable group of people around her. Those people include her parents. Sweetman's crack about them "giving up" their daughter was cheap and nasty. I gather her mother is on the six-week promo tour she's just begun, which seems entirely sensible. These aren't stage parents. They're people managing an extraordinary situation. The one criticism I would have is that Scott Maclachlan will soon have to choose whether he wants to be Lorde's manager or a Universal employee. He shouldn't be both.

Yes, she's on a six-week promo tour, and then she'll go back to her studies. She's just done French TV, and seems to be on a similar circuit to the one Lana Del Rey flubbed pretty badly last year. She's going to appear on Later With Jools Holland, in the same show at Kanye West and Kings of Leon. I'd be over the moon about that. Sweetman offers this:

Except I don’t get the buzz around this EP at all – sorta extraordinary to think that Lorde has gone on to appear on Billboard covers and play Jools Holland and whatever else. Hey, good on her, if that’s what she wants – and I’m sure she doesn’t even know what she wants – that’s all fine if fame is what you are after.

"If that's what she wants"? Seriously? Because for some unfathomable reason, artists wouldn't want to appear on a prestigious BBC show alongside their musical heroes? But of course, Sweetman is "sure she doesn’t even know what she wants." No. Of course. Because presumably someone's scripting all those level-headed interviews she's been doing. It's just a staggeringly patronising thing to say.

Yes, he really did just casually, crudely characterise a 16 year-old as wank-fodder. Her mother read that. Perhaps he should consider keeping his creepy projections to himself in future.

Because nothing in any of the imagery around Lorde bears out that vile little dig. If anything, the key to the the videos made for 'Royals' and 'Tennis Court' by Joel Kefali of Special Problems is the upfront, first-person feel of the YouTube vlog. She eyeballs the camera, most of the time. It was a relatively inexpensive way to make videos, but also quite a gutsy choice in an artistic sense.

Anyway, Sweetman is emphatic it will come to nothing.

But that fruit tree will die.

I wouldn't be so sure. Universal NZ has a reasonable track record here. The present boss, Adam Holt, brokered Hayley Westenra's international deal with Decca shortly after taking up the job (she was signed in New Zealand by his predecessor, George Ash). Her career has gone quite well since. My impression is that they see Lorde in the long term too. When I spoke to Adam on a panel at NetHui in July, he said that, for all people thought, what they'd mostly been doing was saying "no" to nearly everything.

Sweetman has a sliver of a point when he writes about the patriotic swelling in response to Lorde's success. Hell, I compared her to the All Blacks last weekend. The backlash has to come, and people are entitled to disbelieve the hype.

But I guess one man's jingoism is another's pride in seeing someone do well. Consider this: the two songs between 'Royals' and a number one hit in America are Katy Perry's 'Roar' and Rapey Douchebag's 'Blurred Lines'. Both of them were co-written and produced by Dr Luke, a 40 year-old man who runs a songwriting factory and is also responsible for Miley Cyrus's elephantine new single. [Correction: Duh. Actually, Dr Luke produced the other Rapey Douchebag single. But still.) That they might be toppled by a record made in a tiny studio in Morningside, Auckland, with an almost unknown producer, is simply amazing.

Sweetman thinks of himslf as an iconoclast, and, yeah, it takes some nerve to denounce barbecue reggae in a Wellington paper. Someone had to. He can write well about the range of music he likes, and completely miss the point of anything outside that range. Too often, he seems to be merely seeking attention. But in this review, he writes like the troubled child he believes Ella Yelich-O'Connor to be. The one who needs to grow up isn't Lorde. I think it would be decent of him to apologise for parts of what he wrote.

Anyway, to end on a more positive note, this short video interview with Lorde's co-producer, Joel Little, is great. If you want to get a feel for what really happened here, watch this:

David Saunders' short tour with Street Chant as his backing band begins tomorrow night at the King's Arms, with Voom and Randa. Chris Stapp, who made the tour poster, has now come up with this amusing cartoon: And now it's party time.

I came across these two seriously reconstructed edits -- flips, basically -- of Donna Summer's 'Love to Love You Baby' and 'I Feel Love'. For some silly reason, embedding has been disabled, but you can listen to them on Soundcloud and and buy them digitally if you like. I did.

Another one fresh out of the Karim vaults:

And, finally ... filling on for Peter Urlich on bFM last Saturday morning, Simon Grigg dropped St Etienne's lovely, unlikely cover of Neil Young's 'Only Love Can Break Your Heart'. I have that on 12", but could I find it to buy digitally? No. What I did find was the really wonderful Richard X remix of it.