It's an irony of the digital age: as one medium, video, reaches our senses in ever-higher resolution, the modern way we listen to music has stalled wth a technology that degrades the work and takes it further away from the original recording.

In exchange for the utility of the portable player and its online store, most of us settle for a pale impression of the way the music sounded in the studio. Even if we rip a CD, we're usually making an inferior copy of a format launched in the same year as the Commodore 64.

And for most of us, most of the time, it doesn't matter. In an intriguing column for The Quietus, Robert Barry notes that the MP3 file format (itself something of an accidental champion, but that's another story) was effectively designed for the way we use music now:

As McGill University professor Jonathan Sterne has detailed in his two pioneering histories of sound media (The Audible Past and MP3: The Meaning of a Format), the development of the telephone relied on a particular model of the tympanic mechanism in the human ear. The mp3, on the other hand, relies on a psychoacoustic model of the way sound is processed in the brain. "The mp3 format," he writes, "is designed for casual users". The way it compresses sound is predicated on the gaps in our hearing in a 'normal' listening environment – that is, one in which there is a bunch of other stuff going on: traffic, air conditioning, the hubbub of other people talking.

"The mp3 plays its listener," Sterne wrote in an earlier article for New Media & Society. "Built into every mp3 is an attempt to mimic and, to some degree preempt, the embodied and unconscious dimensions of human perception in the noisy, mixed-media environments of everyday life … [It] puts the body on a sonic austerity programme. It decides for its listeners what they need to hear and gives them only that."

But that's actually only half the story. The other is that MP3 -- or AAC or any other digital format -- will sound better if its digital information is converted to an analog signal by a better device. Which does not necessarily mean a more expensive device, but it generally means a bigger one.

The DAC (digital to analog converter) in a phone, iPod or portable computer has been designed to be modest both in size and its use of power, not to deliver the best possible sound. On the odd occasion that I take my laptop out to DJ, I always take my external DAC; a clunky-looking white metal box that cost me $120 at Surplustronics and connects to the Macbook's USB port, thus bypassing the computer's internal DAC.

It's kind of dorky, but it really does sound better, especially through a PA system. Bass,  especially, sounds richer and fuller. More like, ironically, the way vinyl records sound through the same system.

At home, I've cobbled together a system based on Apple's Airplay technology. iTunes sends a digital signal, via ethernet, to an Apple TV puck which sends it on to an HDMI port in my cheap Onkyo receiver, which is where it's converted to analog. Again, it sounds better than just jamming a lead into the computer's headphone jack. I'm less fussy when it comes to plugging my phone into my piece-of-shit car stereo.

But all this bothers Neil Young immensely. Modern convenience in the first of the iPod -- and even the CD -- embodies a sacrifice that, for him, is actually painful. And this week at South By Southwest, he delivered his solution: Pono, which seems less a product than an artistic call to arms:

PonoMusic is more than just a high-resolution music store and player; it is a grassroots movement to keep the heart of music beating. PonoMusic aims to preserve the feeling, spirit, and emotion that the artists put in their original studio recordings.

Like iTunes, Pono is an ecosystem: an online store that sells recordings to be played on a hardware device. You only need to look at the thing to get what I was saying above about how you can have small or good, but not both. 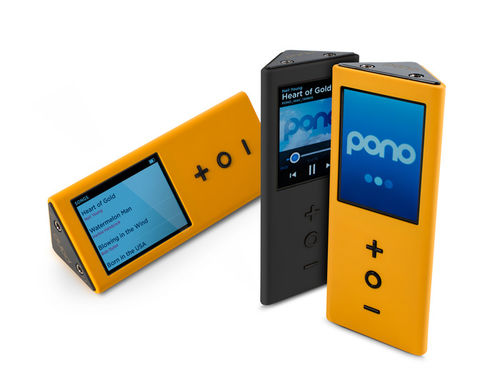 So unless you fancy jamming something the size and shape of a large Toblerone in your pocket, this thing is not portable in the sense than an iPod is portable. But it will render music encoded in the already-popular (with geeks) FLAC format at 1411 kbps (44.1 kHz/16 bit), which is what you get on a CD, all the way up to 9216 kbps at a resoution of 192 kHz/24 bit. Obviously, those higher-resolution files are derived directly from the original master recording. According to Neil's muso mates in this really rather over-long endorsement video, it is how music was meant to sound.

The Kickstarter set up to launch Pono has gone gangbusters.

But there are a few issues. Apart from its fugly design (Steve Jobs is raging in heaven), the Pono player ships with only 64GB of storage, expandable to 128GB. I've seen an estimate of individual track sizes of 300MB at the highest resolutions. It's going to fill up quickly. Also, is two kinds of 3.5mm plug the best way to output this stuff? At eight hours battery life, it's not going to get you through a whole day unplugged.

Many people aren't convinced. There are headlines like Pono sets a new standard in worthlessness. But I think Neil's grand idea can make a difference even if it only does well enough to nudge Apple towards first making music available for sale in a lossless format (which it could do tomorrow, dammit) and perhaps putting better components in its devices (more difficult, but, hey, your move Samsung).

As a legacy of a few years as an eMusic subscriber, I had a fairly large collection of MP3 tracks ripped at bitrates as low as 160Kbit/s. I was able to do the iTunes Match trick to upgrade a bunch of them to 256Kbit/s AAC files, but the remainder of those tracks now sound objectively shitty. And to be frank, it pisses me off that I've even paid money for 256k files.

There's no need for this to be the ceiling. From Bandcamp, I can -- and generally do -- choose to buy in the lossless, CD-quality ALAC format (FLAC won't play in iTunes). Dance stores like Beatport and Juno will sell you high-quality WAV files for a little extra. It means I can carry less on my phone, but my iMac's hard drive is plenty big enough. But most commercially-released digital music is still stuck in the world of the lower bitrate. It would be nice to at least have the choice to go large.

Edit: Thanks to Jonathan McArthur on Twitter for the tip on this comprehensive blog post about the sheer folly of Pono's upper-end file file formats, the actual value of lossless formats and much more about digital music.

A couple of things for students of the culture ...

And on Audioculture, Murray Cammick writes up a pub where I spent many happy hours in a variety of states, the Windsor Castle.

Best wishes and congratulations on a fine innings to Nick Dwyer, who signed off his last GeorgeFM breakfast show this morning. He's off to take up a long-planned role as creatuve director of a Japanse radio station and I'm quite certain he'll do that very well.

Conrad Wedde has taken a break from being a member of the Phoenix Foundation to record a second solo album, Space World. It's a trippy, exotic (influenced, says Conrad, by his love of "70s Turkish rockers like Erkin Koray and Baris Manco) collection led out with this lovely, simple video.

It's out a week from today and will be available from his Bandcamp page.

Or you can buy direct and/or pre-order the vinyl at Flying Out.

As I've previously noted, this is quite different to the first album -- it's less a bag of tunes than a journey. And it's quite a trip.

Watercolours has posted a very nice remix of 'Kyoto Train', from her Portals EP. Any chance of a download, Chelsea jade?

A tiny gem posted on the Lontalius Soudncloud account by Eddie Johnston this week:

Noted by Bob Daktari in the comments for last week's post, this blast from the past remixed by Greg Churchill:

That's a free download, as is this reworking of one of the first British house records, from up north:

Over at the Audience, it's not really my thing, but this dramatic, big-chorus rock project from a local supergroup is very accomplished:

For James Dann, a fairly mental "re-twerk" of the old Ace of Bass hit for download:

Funky reggae kings The Pioneers given some b-boy beats:

From the same Souncloud account: obscure African artist has obscure record he made in Madrd discovered and reworked by obscure Russian DJ. And it's great!

And, finally, the righteous and wholly necessary kitchen groove for a wet weekend ...