Splore's first lineup announcement was made this week – and in keeping with the 2017 theme of "Family Reunion", it's headed by some notable returns. Dub Pistols are back after a cracking show this year, the Ragga Twins just can't stay away – and Splore whanau Pitch Black are back!

Pitch Black have a new album, Filtered Senses, available here on Bandcamp. It's an internet-enabled project, or as they put it, "songs created via remote control through pipes of light between Piha, NYC, Toronto, London," meaning that apart from a two-week mixdown in hackney, Mike Hodgson largely worked on the tracks in London and Paddy Free was all over the place.

It's a work of spacious techno dub for which you'll definitely want to connect the subwoofer. You can get a taste of it in their album preview on Soundcloud:

Also of note at Splore – for me, anyway – is the announcement of the brilliant Detroit DJ-producer Tall Black Guy. There will be another couple of staged announcements, but I'm pretty happy with things so far. (Also, go and sit in front of the video on the Splore home page and tell me that doesn't look like fun.)

As I noted last week, the Laneway 2017 lineup announcement is out too – and, as per tradition, it's full of artists you probably haven't heard of but may well be gaggin' to hear by January 30. The general tone seems to be shifting even further towards indie electronica, which is fine by me. I've been working through Bob Moses:

I'm presuming there won't be as much nudity on stage as there is in the videos.

But before all that goes down, there's a different kind of festival. Mokonui Music is staging its second Lettuce Inn festival in avocado grove on the Liberty Growers’ hydroponic lettuce and herb farm in Katikati on October 22 (ie: Labour Weekend). 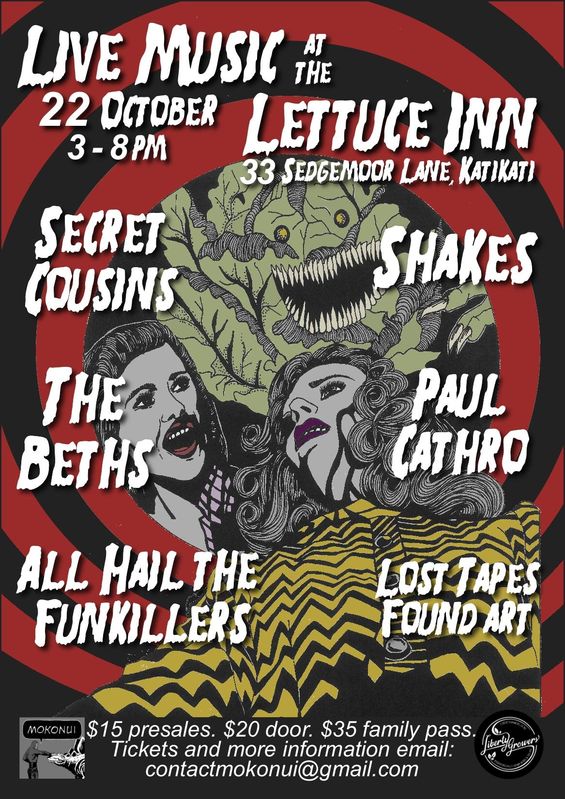 It looks really nice. And affordable – family tickets are only $35. More details on the Facebook event page.

Meanwhile, Auckland Council is putting on a gig in front of Britomart Station from 5pm today, to make you think about voting.

Not strictly music content – but it uses music really well. Friday Night Bites, by Roseanne Liang and the Flat 3 crew, is arriving in snacked-sized pieces on TVNZ Ondemand every Friday for the next few weeks. And the first episode, Slutwalk: The Musical – a spirited discussion of rape culture through the medium of song and dance – is really something else.

Update! Looks like the episodes are going on YouTube after a week on TVNZ Ondemand. Good call. Means I can embed this:

Meanwhile, Roseanne's guest post about TV and diversity made the front page of Angry Asian Man. This is its conclusion:

Talking about diversity is easy. Practicing diversity is hard. You might get a few wobbly performances. You might have to spend longer developing the talent. There are a few good Asian actors out there, compared to a legion of good white and brown actors. If more production companies placed an emphasis on casting diverse, imagine how rich and varied a legion we could grow!

We make this silly, fun, sex-positive, thoughtful diverse comedy because we need it. If we don't do it, we don't know who else will. We work hard and worry our mothers, because they taught us about focus and work ethic and not quitting. We just want four things-to be good, to see ourselves on screen, for people of all walks of life to watch us and relate, and for our work to be sustainable. That's it. That's all.

Alan Yang is right. We've got a long way to go. It's going to take a lot of hard work. I know it'll happen. I just wish there was some kind of exam we could ace to get there, now.

Tourettes has been building to his album Feel Like Shit, Looking Great for what seems like – actually is – all year. The album, with music by Abe Kunin, is on Bandcamp today:

But the audio is only half the story. The Bandcamp page also has a buy link for the related lyric book, designed by Roy Irwin, which, it says here, "documents Dominic’s journey through the health system, searching for meaning in a neo liberal theme park and the quiet madness and beauty of the New Zealand countryside."

The book will also be available at proper record shops and the launch gig is tomorrow night at The Wine Cellar.

Promising new artist Leonard Cohen, 82, has an album on the way and this is a deeply savoury taste of it:

You'll soon be able to tour the Paisley Park Museum.

And on Audioculture, Arthur Baysting rounds up New Zealand songs with geographical namechecks.

Biggie Smalls' much-remixed 'Party and Bullshit' gets the drum and bass treatment. It's noisy as fuck! (Free download with Hypeddit palaver.)

And a lovely Dr Packer rework of a Stevie Wonder oldie (Artists Union palaver for the free download):