It's hard to overstate the significance of The Clean's Boodle Boodle Boodle in the history of Flying Nun, the label that released it, and in the context of New Zealand music in general. In some ways, it's the reason there is a Flying Nun – in that while two other releases preceded it, Boodle's commercial success was what convinced Roger Shepherd that running a record label might actually be viable.

The five-track EP (the first Flying Nun release to appear in the 12" EP format that became a hallmark of the label's early years) vaulted into the national singles chart on release in November 1981 – and stayed in the charts for a further six months. (It would eventually, years later, go platinum.) Although the charts were accessible to local indie releases in a way they are not now, it was still a remarkable result.

Yet more remarkable are the circumstances of its creation. It was recorded over three days in a rundown hall in Bond Street, Auckland, by people who barely knew what they were doing. 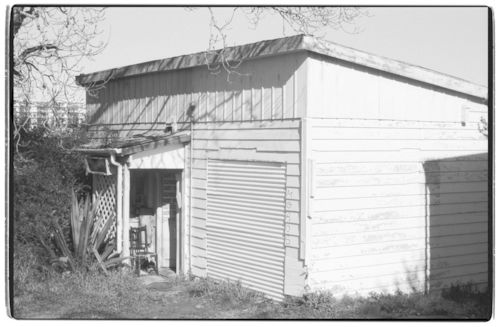 The record was captured on the four-track TEAC recorder that Chris Knox had bought with a $400 inheritance from his grandmother. At the controls was Doug Hood, who had some chops as a live soundman but very little experience of recording. But he had recently recorded The Techtones' TT23 album on the TEAC and, as Robert Scott explains in this excerpt from the 95bFM/RNZ series Extended Play (the full Boodle episode is here), the band really liked how that sounded.

Chris Knox is formally listed as Boodle's producer, but I think Doug's experience of live mixing helped the record work just as much. Because Boodle is played live –mostly. In Singing g against the E chord, his short essay about Boodle for Grant Smithies' anthology Soundtrack, Graeme Downes notes almost regretfully that for 'Point That Thing Somewhere Else', David Kilgour, who could give the miraculous impression of "two guitars in the music but only one guitarist on stage ... felt compelled to somehow replicate [that] here with an overdub."

'Point That Thing', played a million times since, each time different (it being "more a procedure than a fixed song," Downes observes), is the undoubted opus of the EP. It remains one of my favourite pieces of music and, like some other classic Nun songs ('Skin', by Bailter Space, for example) seems to conjure geography. David once told me it made him think of belting across the plains of Central Otago in a fast car.

But the other four songs have their magic too. The wonky 'Sad Eyed Lady', the bustling 'Billy Two' (the twinkle of backwards guitar in the bridge being, you'd think, the influence of the Beatles-loving Knox), the infectious 'Thumbs Off' (the first Robert Scott song on record!) and 'Anything Could Happen', with its ringing opening chords. The themes of these songs are surprisingly dark – 'Anything Could Happen' is about trying to score drugs from a suspicious doctor, 'Billy Two' is about an alienated loser and 'Point that Thing' is plain paranoid – but the music is full of life.

The original EP goes for quite a lot of money on Discogs, and Boodle itself isn't available as a digital release, but you can hear the five songs, in their original order, on The Clean's Anthology compilation, which is on the streaming service of your choice. They still sound fresh.

The reason you're reading this is that this week Boodle Boodle Boodle was named as the recipient of Independent Music NZ's Classic Record award, as part of the 2017 Taite Music Prize. I strongly approve of this choice. 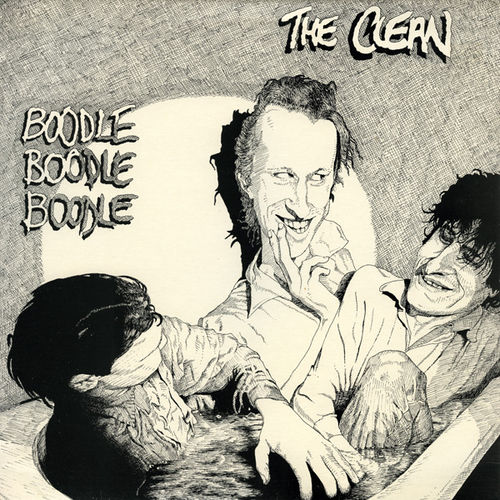 On a totally different note, Oro Festival's timetable for next Saturday is out: 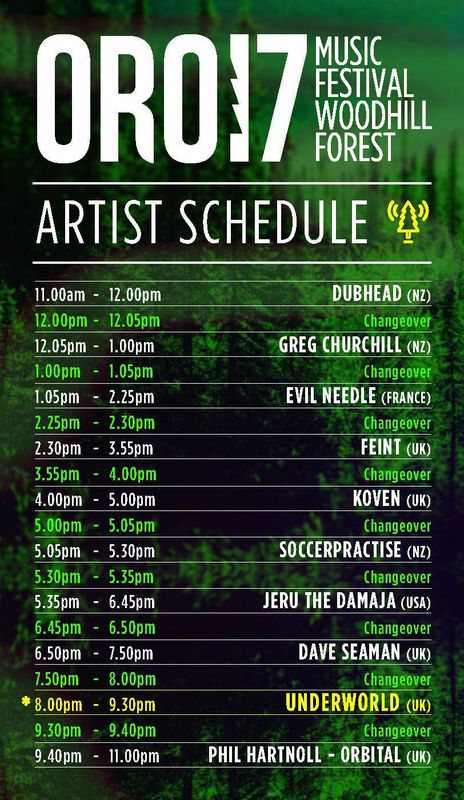 I'm actually looking forward to being bussed out to Woodhill from town. I think those trips will be quite amusing, the return especially.

In a celebration of the joys of the album cover, Tasman District Library in Richmond asked my friends Pete Darlington and Jo Skinner to select the sleeves of their favourite vinyl records for an exhibition. 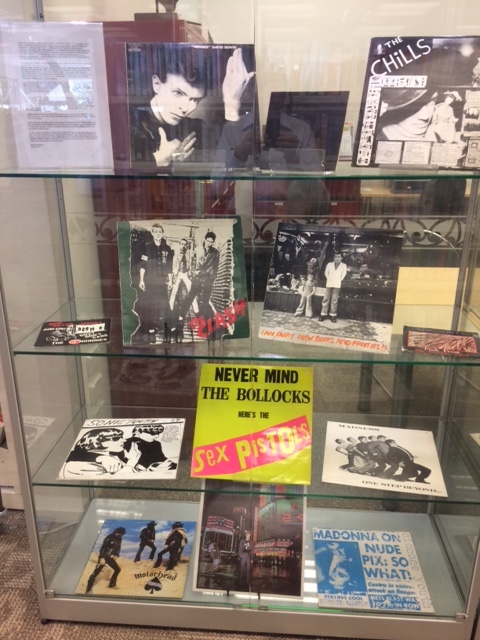 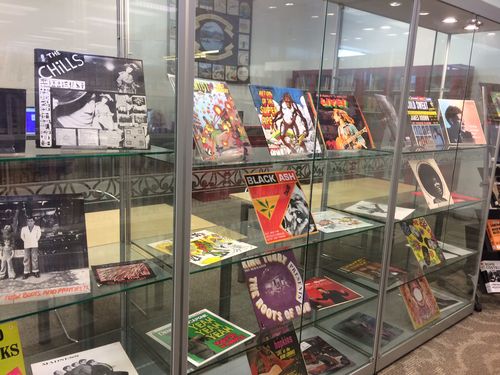 Pete also wrote some text about why records matter:

Some of my earliest memories are of my Mum putting 45” singles onto a portable record player. The Beatles, Roy Orbison’s, “Pretty Woman” and Chuck Berry’s “No Particular Place to Go” are some that stand out. We got “20 Solid Gold Hits” albums every Christmas and used to play them endlessly. So I’ve always had vinyl records around me. I also had older brothers who brought home early heavy rock albums by Black Sabbath and Led Zeppelin on cassette tape so I used to sneak the portable player into my bedroom and play them. I grew up liking heavy music while most of my friends were into pop groups like The Osmonds.

The first grown up album I ever bought with my own money was David Bowie’s “Heroes” in early 1978. From there my after school work and pocket money always went on records. I was 14 when I first saw The Sex Pistols video “Pretty Vacant” on Radio With Pictures. This was the first “new” music aimed at my generation that I had encountered and I was sold on it and bought any albums that I could for the next few years. At university, New Zealand’s Flying Nun label was creating international attention with bands like The Clean and The Chills. I was lucky enough to see many of these bands and buy some of the earliest Flying Nun releases as 45 rpm singles and 33 rpm albums.

It was through punk that I first heard reggae music. It was the same time that Bob Marley was making a big splash touring the country but as a teenager I preferred the Clash and The Ruts punk takes on reggae tunes. I got more interested in the genre as I got older though and, while the selection in New Zealand was limited, over time, reissue labels have made extensive amounts of classic roots reggae and dub music available to local buyers.

Reggae is now the music I play most. For the casual listener, it may all sound very similar, but when you burrow into it, there are endless versions, twists and turns of great sounding music. The lack of money in Jamaican music led the early recording artists to cover classic USA Rhythm & Blues and Soul Music with a ska and reggae style. This was my introduction to this genre, which I’ve followed into Funk and Hip Hop. My partner Jo was also an album buyer and introduced me to jazz music, particularly bebop from the 1940s to the 1960s.

Reggae also introduced the idea of the dubplate and version (remix) which influenced early rap and house musicians and eventually spawning genres such as Jungle, Drum & Bass and Dubstep.

In the early 90s, we finally gave in and bought a CD player for the home hifi. It was never the same though and thankfully, we never sold our vinyl collection. As more vinyl started to come back onto the market, we stopped buying CDs and just continued buying vinyl and have no plans to stop.

To help justify my addiction, I play music on Fresh FM with a show called Magnetic City that covers all the genres above, every second Tuesday, 7-9pm with shows available to replay on www.freshfm.net. I also occasionally DJ in town with a friend, calling ourselves Magnetic Selector. Keep a look out for us and come and listen to some of this wonderful vinyl music, live and direct, as it should be.

Ghost Wave get high on Mt Eden for their new video. And all the mischief and fake moustachery can't disguise the fact that this is a great song:

And the All Seeing Hand just freak the fuck out ...

Note that you can catch The All Seeing Hand, Ghost Wave, Hex and a bunch of other bands this weekend in Auckland at NZ Psych Fest 2017.

And clipped from the same mixtape, a thoroughly bonkers take on a reggae classic:

Rock 'n' Rolla Soundsystem have posted this entry in a Nicodemus (the Jamaican one) remix contest. It's bloody great and I hope they can make it available for purchase or download soon.

And another Karim dub – it's a free MP3 download or get the HQ file on his Bandcamp: