When the tales of music are written, they rarely include the people who aren't in the band, but make it all possible. So I'm delighted to see that Audioculture has this week published an article on my old friend Doug Hood.

We all know about Chris Knox's TEAC four-track. You might not know it was Doug who was at the controls when Tall Dwarfs used that four-track to record 'Nothing's Gonna Happen' and when it was used to record The Clean's Boodle Boodle Boodle, the Dunedin Double and The Chills' 'Rolling Moon', among others. He helped produce The Androidss' 'Auckland Tonight'/'Getting Jumpy' and The Builders' Beatin Hearts and mixed The Chills' 'Pink Frost'. He managed The Chills when they first went to the UK.

It was Doug who was soundman for Toy Love and a long, long list of groups thereafter. Doug who ran the famous Looney Tour and who first toured The Fall, The Birthday Party, John Cale, Nico and The Violent Femmes and many others to New Zealand. It was Doug who brought the Big Day Out here in in 1994.

For many years, Doug was the calm, funny, practical guy who basically did what needed doing in the musical community he helped create. He hasn't had a direct music industry role since the mid-90s, but he's still very much part of that community and I'm proud to call him a mate.

Oh, and did I mention he was in The Clean too? 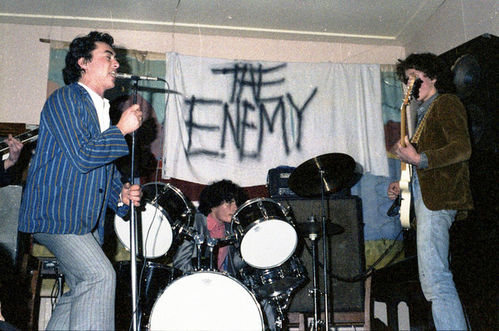 There's a hell of a lot in Auckland this weekend.

Tonight alone sees The Mad Professor playing at Neck of the Woods, Luka Buda's band (and with David Long and Anthony Donaldson from Six Volts) Teeth at Golden Dawn, Breakbot out at the Pah Homestead (you can buy a bus ride there along with your ticket), Ijebu Pleasure Club's wild blend of classic pop and afrobeat at The Portland Public House, and, just quietly, Auckland art punk legends The Features are playing an early show at the Thirsty Dog to mark the release of the new X Features compilation. (Strictly speaking, it's the X Features playing, but y'know.)

Russell Baillie has a nice piece for The Spinoff on the band and what they meant to those around them.

And tomorrow night, Peter Jefferies, Chris Matthews and Gary Sullivan convene at at Golden Dawn to celebrate the release of the first This Kind of Punishment record in 30 years by offering "a delectable array of T.K.P., Childrens Hour and Nocturnal Projections morsels". Also, Teeth play again, at The Wine Cellar. And at 12.30pm tomorrow, SoccerPractise and Peach Milk play for free in Aotea Square.

I picked the wrong weekend to be sick ...

Along with some clever guests, Charlotte Ryan and I talked about the year that was at Orcon IRL at Golden Dawn on WEdnesday. And after the talking was done, Voom played a sweet little set. Here's the video of that:

Elsewhere, a little taste of what you can expect from Dinosaur Jnr when they visit next month: playing 'Goin' Down' on Conan.

Iggy Pop sings 'Surfin' Bird' to his cockatoo – and the bird really gets into it:

A mad new Hallelujah Picassos single! Peter Mac has the lowdown on his blog. It's on Bandcamp for a dollar or whatever.

The first new track in ages from High Hoops. It's cool and slinky ...

New single from the award-winning Pacific Heights. It's well dreamy ...

And going fully garage, Australia's Cup & String remix one of their own tracks from earlier this. Click through for a free download of the MP3 or WAV:

A well-chilled edit of Caribou's 'Can't Do Without You' (free download):

And because kitchen-dancing matters, NZ DJ Sammy Senior gets all up in your grill with the ghetto funk on this mix of his productions. Use the download button to grab the whole thing and click through to download the first track standalone, for free: