There is, of course, already a discussion thread here devoted to David Bowie and his passing – and I had intended to lead with something different for the regular Friday Music post. But then I noticed this post on Dangerous Minds. It basically explains that David Bowie is cooler than you will ever be because he recorded the first Velvet Underground cover – before the first Velvet Underground album was even released.

In 1966, Bowie's manager Ken Pitt returned from New York with an acetate of the album that would be released as The Velvet Underground and Nico. Pitt didn't much fancy the record, so he gave it to the young singer, who liked it very much and had The Riot Squad, the band for whom he was briefly lead singer, play it. It was never officially recorded, but there was a rehearsal tape which was released on an album of Riot Squad oddities in 2012:

Bowie didn't stop there. He also lifted lyrics from 'Venus in Furs' for the Riot Squad song 'Toy Soldier'. It is, to be honest, a pretty bad song, albeit hardly one where you'd expect to hear the words "Taste the whip and bleed for me".

In a piece Bowie wrote for New York magazine on being a New Yorker, republished this week by Vulture, Bowie gives his account of discovering the Velvet Underground. And he says the first Velvet Underground cover was in fact performed by his other band at the time, Buzz (aka The Buzz), when he insisted it be done as an encore at the band's final gig.

"It was the first time a Velvet song had been covered by anyone, anywhere in the world," he writes. "Lucky me."

I think it's worth quoting at length Bowie's account of hearing the Velvet Underground for the first time:

The second, a test pressing with the signature warhol scrawled on it, was shattering. Everything I both felt and didn’t know about rock music was opened to me on one unreleased disc. It was The Velvet Underground and Nico.

The first track glided by innocuously enough and didn’t register. However, from that point on, with the opening, throbbing, sarcastic bass and guitar of “I’m Waiting For the Man,” the linchpin, the keystone of my ambition was driven home. This music was so savagely indifferent to my feelings. It didn’t care if I liked it or not. It could give a fuck. It was completely preoccupied with a world unseen by my suburban eyes.

Actually, though only 19, I had seen rather a lot but had accepted it quite enthusiastically as all a bit of a laugh. Apparently, the laughing was now over. I was hearing a degree of cool that I had no idea was humanly sustainable. Ravishing. One after another, tracks squirmed and slid their tentacles around my mind. Evil and sexual, the violin of “Venus in Furs,” like some pre-Christian pagan-revival music. The distant, icy, “Fuck me if you want, I really don’t give a damn” voice of Nico’s “Femme Fatale.” What an extraordinary one-two knockout punch this affair was. By the time “European Son” was done, I was so excited I couldn’t move. It was late in the evening and I couldn’t think of anyone to call, so I played it again and again and again.

There is a little more to this. While the Velvets were totally out of step with the West Coast love vibe stateside, a kind of secret musical history unfolded in London. The Yardbirds got hold of a copy of the album – perhaps because JimmyPage had played guitar on Nico's debut single in 1965 – and added 'Waiting for the Man' to their live set:

The song was also performed by Mick Farren's MC5-like London band of freaks The Deviants. Which brings us to another connection. After being kicked out of Hawkwind, the late, great Lemmy went on to form a band with Deviants guitarist Larry Wallis. That band was called Motorhead.

And that, boys and girls, is the end of today's lesson in how everything is connected.

Audioculture has a second installment of the punk-era pictures of Sara Leigh Lewis.

There's also a whole new trove of Auckland punk and thereafter photographs, from the private collection of an unnamed donor, who has stipulated that they're copyright-free. They include this remarkable pic of Doug Hood onstage with Chris Knox in The Enemy in 1978: 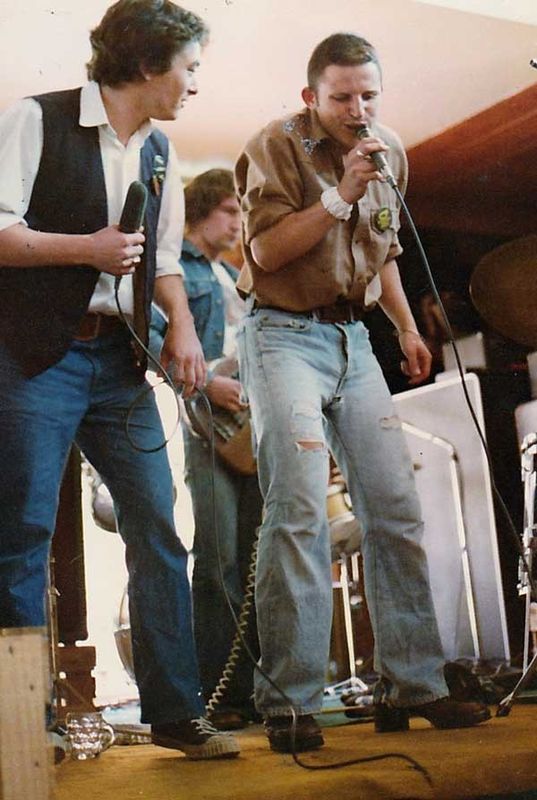 And this pic of Kath Webster from Look Blue Go Purple, wearing the frock that became the EP cover ... 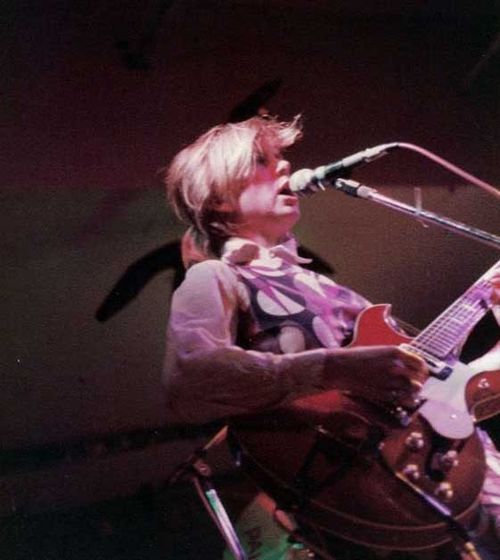 Me and my crew are excited and set to dance at Sunday's Shipshape with John Morales. If you like disco, funk and soul, you might want to get along. And you might want to bend an ear towards Nick Collings' interesting interview with Morales for Radio Hauraki's In It for the Kicks show before the DJ's first New Zealand show last year:

100% for the dancefloor this week.

I've mentioned the Australian UK-garage DJ duo Cup & String before (notably for their great bootleg remix of 'Say My Name' by Destiny's Child). Three months ago, they posted an amazing remix of The Streets' 'Has It Come to This', promising to take it down if anyone objected. Never mind that, said a hundred people in the comments, can we please god have a download of this? And you know what? They've done it. Click through and get in and get yours while it's still there:

Connor Nestor and his buddies at A Label called Success have been trickling out nu disco niceness for a few months now, but have chosen only to put it out on the streaming services. Being elderly, I asked Connor this week whether there was any way of buying an old-fashioned download. There isn't (although it appears there will be in future) but Connor was kind enough to switch on the download for this, their latest release. It features Jordan Arts of High Hoops and Leisure on vocals and it's sweeeeeeet:

George Darroch put me onto this rework of a techno classic. Free download:

This swooning deep house remix of Tula's cover of 'Wicked Game' is also a free download, but requires an irritating Spotify follow (I just clicked the "I'm already following" link and that worked fine):

And finally, London-based Aucklanders Chaos in the CBD on the remix. Free download.  Pretty gorgeous, no?