Just a quickie post this week, because I'm flat-out with with and conferences and stuff. And besides, there's Campbell Walker's prodigious guest post on Peter Jefferies and his work if you want some more reading and listening pleasure. Peter plays with Shayne Carter and Little Moon at the King's Arms tomorrow night.

The buzz of the week is Anna Calvi's cover (with David Byrne) of Connan Mockasin's creepy little delight 'I'm the Man, That Will Find You'.

There's more about the EP it comes from here.

Revival tune of the month! An brilliant reggae cover of Chic's 'I Want Your Love', nicely edited by Australian DJ Hober Mallow. Thanks to Keegan Fepuleai for the heads-up on this:

A nice downloadable mix for Fabricate by Andrew Spraggon, aka Sola Rosa. It includes Ladi6, Home Brew, Benny Tones and Noah Slee alongside the likes of DJ Vadim, Hermitude and more:

A pick from TheAudience. I've never heard of Wellington's The Nature of Forces before, but this is pretty cool and reminds me of Deastro and Paquin:

More in a classic sort of pop-rock vein, The Pleasures of June (click through for the free download):

And more Courtney Barnett. She's so cool and this is probably the best song about having an asthma attack ever:

Her double EP A Sea of Split Peas doesn't seem to be available in the New Zealand iTunes store, but you can buy it via Bandcamp, which is way better anyway.

A little tidbit from the FlyingNunStory Tumblr -- Murray Cammick's brief January 1980 profile up-and-comers Toy Love.  Notable chiefly its observation that the band's set includes their "covers of 10 years or so ago." So that's 'Anold Layne' and 'People' are strange -- both only "10 years or so" old. It's easy to forget how close the 70s were to the 60s.

Mojo marvels ("we’re tuning into things we’re sure we’ve never heard before") at the sound of the Beatles albums remastered in mono for vinyl release.

Audioculture goes way back with Aleisha Ward's stroll through the rise of jazz fandom in 1920s New Zealand. There were "jazzing contests"? Awesome.

And finally - hey! I get quoted on the front of Trick Mammoth's new Japanese vinyl! 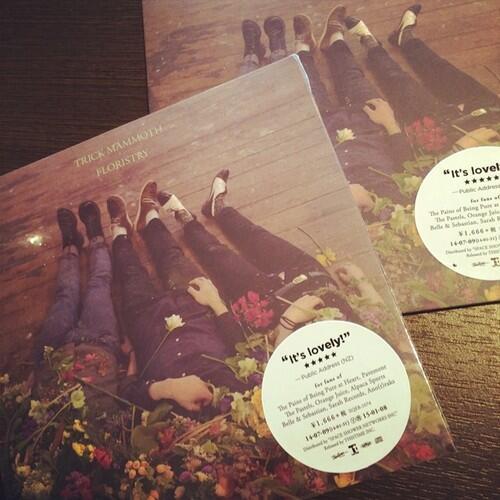