You've probably heard all this by now, but here's the bottom line on Big Day Out 2014. The new site at Western Springs is (mostly) great: comfortable, beautiful, sonically sympathetic and near its audience. The lineup gelled better than I expected -- and I suspect I'm not alone in that. The Arcade Fire were grand, Pearl Jam fans seemed to get what they needed, Snoop fans had it large and it seemed like everyone still standing had a blast with Major Lazer.

On the other hand: queues. Queues for toilets, for bars and for verification to spend money at bars, and a crush between the main part of the site and the Lakeside Stage which at times threatened to become unsafe, and prevented me seeing Ladi6. (There was also a queue to withdraw cash via Eft-Pos, but I feel nothing for those people, because they are frankly stupid. Festival 101, people.)

The promoters have acknowledged and promised to address each of these problems. Given the sheer scale of compliance work in the festival's first use of the site, I think they're very much entitled to the benefit of the doubt.

The Metro Cube is worth persevering with. I enjoyed my 90 minutes' talk (Serj Tankian may actually be the nicest man on Earth) and the music programme later on was a little jewel. Jackson says Tom Lark and Lydia Cole were fab.

The return of the festival has been quite well documented. There are tons of photos and some quite sophisticated web videos. I went through a few videos on YouTube and I think these are the best of them.

Andrew Budgen took it up a notch on the phone crowd by shooting with a GoPro (bless the relatively relaxed security attitude that let him take it in). He captures the atmosphere quite well and also shoots inside a portaloo:

This Arcade Fire video is a little weedy on the sound side but has the great virtue of being shot from the front row. I kind of want to give those fans a cuddle.

In the normal course of things, people who shoot their mobile phone videos in portrait format deserve our unfettered scorn, but with this guy in the crowd for Major Lazer, you have to not only forgive him, but acknowledge that it actually works. Take it full-screen and watch what happens.

Also, a nice piece for The Wireless about actually playing the Big Day Out (with embedded interviews with other artists and stuff) by Thomas Watts of Villainy.

You should think about going next year, but be aware that there are tens of thousands of people, it's hot (or cold or wet or windy) and there is basically no place free of a fairly high level of noise. There will never not be some queueing. It's not for everyone, but for the people it was for, it was pretty awesome.

My own Big Day Out practice tends to be to spend quality time with my friends and not my phone, but I do really like this photo I took as we headed out from the Immortals to see Snoop Dogg, Dillon Francis, Steve Angello and Major Lazer. 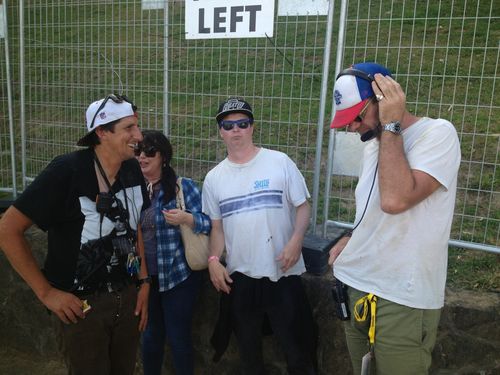 From left: Big Day out event coordinator Etienne "ET" Marais, my friends Adrienne and Andy, and promoter Campbell Smith with his game face on.

Meanwhile, both Laneway and Splore festivals published their timetables this week. Let's have a look.

The most significant change to the site is that Friends & Family (a kinder and more appropriate name for the VIP Bar) has been moved. So the grassy kolls that in the first year on the site were a service area, then F&F, are now available to public punters at the main stages. This is good. And yer industry types have a nice spot between the water and the Cactus Cat stage, where Cat Power finishes up. I'd have been dubious about her as a mainstage closer, but this might be lovely.

Immediately before Cat Power, Jamie Xx confirms that the Cactus Cat is where I'll see out the show. Elsewhere, I'm slightly miffed to find that Unknown Mortal Orchestra and Mount Kimbie clash, as do Kurt Vile and XXYXX. But do you see me crying, Pearl Jam fans? No, you do not. I guess I'll aim to be ready at 1.40pm to see Sydney band Jagwar Ma, who I'd rather have seen in the evening but am looking forward to anyway. Also of  note: a beefed-up Thunderdome programme, including High Hoops (massive clash with all the things!), Watercolours, Ghost Wave and the blazing PCP Eagles.

On the downside, MetService has been resolute for days in its forecast for rain and sutherlies on Monday. We can only hope this is one of those times when MetVUW is right and MetService isn't.

On Wednesday, of course, is Lorde's make-good show on the same site. If she flies home to play with a Grammy or two in her hand luggage, I don't think the weather will matter much at all.

On a musical level, this year's Splore programme has something I missed two years ago: some groove after dark. Murray Cammick playing soul at the Love Shack from 7.30pm to 9pm? Thats what I like. High Hoops shortly thereafter? Then the Ragga Twins and DJ Shadow? That too. But one of Splore's key selling points this year is that there's __just so much__. To be able to see The Orb on the mainstage on Saturday night (I do not entirey rule out doing so from wthin the actual sea) and then look forward to Adam Freedland, the Ragga Twins (again), KXVGXN, Soane and Paddy Free? Too much.

Auckland-based Muzai Records is well overdue a mention here. I'll have a more detailed look at its catalogue at some point, but for now, here's a stream of both sides of the Coolwave single out on Friday. It's classic, dreamy alt-pop. pop. I really like this.

I mentioned Tom Lark before. He sounds like this. Great tune.

That's on Tom's 2011 self-titled EP, which is here on Bandcamp along with new work.

I must remember this Lawrence Arabia song in its Brunettes version, but it's lovely hearing it in its original demo form:

In case you want to get real flash with your home DJ set, an instrumental edit of 'The Message':

And, finally, a salute to the people at Wellington's Mighty Mighty, who have called it a day. While there are many cheering things about music in New Zealand at the moment, good live venues remain rare and precious. With the temporary closure of the Bath House further up Cuba Street, the capital's looking a bit tight for the next few months.