This past Wednesday evening, a group of saints and sinners (categories not mutually exclusive) filed down the stairs of Neck of the Woods in K Road for an annual ritual: the New Zealand Music Month Pub Quiz.

The event benefits the New Zealand Music Foundation, which helps out musicians in need and contributes to music therapy for kids with special needs. It's a lot of fun and frequently quite noisy, especially when an answer is constested, which happens every year. (This year, our team was prepared to call Young Sid himself for verification when the judges ruled that he was from Otara and not Mangere as we had answered. Sadly, we couldn't find his number.)

It was good to see some new teams this year, including Spin Wigmore (aka the crew from The Spinoff) – and a new champion. The talent-packed Circa2000 edged ahead of last year's winners World Dobbynation (featuring Trevor Reekie, Russell Baillie and the Dobbynator himself). My team, The Muthafuckers From Hell, based around the staff of a well-known broadcast funding agency, came in fourth, just behind The Universal. 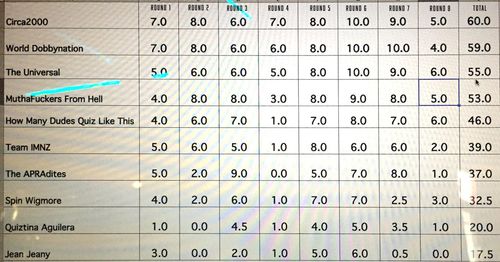 I thought the questions were particularly good this year – and that you lot might like to join in the fun. So here's a selection. There are no prizes or anything, but see how you go ...

What links The Human Instinct, Ticket and the Jordan Luck Band?

The Headless Chickens song ‘Inside Track’ is a cover – who recorded the original?

Speaking of Sharon O’Neill, what was Maxine’s police case number?

Who was the first artist to say “fuck” on national television?

What was the song title of Flying Nun’s only #1 to date?

‘You’re Welcome’ is a song in the film Moana co-written by Te Vaka’s Opetaia Foa’I. Who sang it?

The Neve console at Roundhead Studio was originally built for what English band?

And, finally, name the artist and the album:

I personally got five of these 10 and the team got a couple more. If you'd like more, including some easier ones, the whole lot are on the RMNZ website.

The new Lorde single, 'Perfect Places', dropped this morning as the last track release before Melodrama comes out on June 16. It's a meditation on getting wasted and the associated activities of dancing, having sex and possibly throwing up in the bushes. She can't party without thinking, but she sure can write a chorus.

This is going to be very different to Pure Heroine – you only get to come blazing out of nowhere once, and you really only get to make something that, well, pure, once. And, watching this clip from her set at the Radio 1 Big Weekend ("thank you so much Hull!"), I wondered whether it might all happen in different places. I watched the whole set elsewhere: it's more than half songs from the first album and it goes pretty well – but when she closes with 'Green Light' the energy triples. Almost everyone in every crowd shot seems to know all the words.

Like every song from Melodrama so far, it's an interrogation of her experience, always trying her bridge her singular life as a pop prodigy and the shared experience of becoming an adult. I think it's great that young girls will hear pop music with words like this.

While she's been in Britain, Lorde also did 'Green Light' on Later With Jools Holland, in the same show that Aldous Harding performed 'Horizon'.

At the risk of entering the recent social media argument about Harding's style, I can't help but feel that a great song isn't aided by all the gurning and vocal affectations. But, you know, it's her art, not mine. And there are far worse things for a singer than being talked about.

Reo-pop represents again (their debut knocked Justin Bieber off the top of the iTunes charts last year) in Maimoa's new song. This has had an amazing 100,000 views on YouTube in the week since it was released.

Also fresh: some dance music of a different kind from the new Te Vaka Beats album:

Some good stuff on the local music internet ...

The Wireless interviews Robyn Gallagher about 5000 Ways To Love You, her wonderful labour of love in cataloguing and reviewing every NZ On Air-funded music video ever.

On the same site, Anthonie Tonnon contemplates music venues from Barrytown to central Auckland – and the "inverse of a tragedy of the commons" represented by noise complaints that shut them down.

On Audioculture, Amanda Mills writes up the sometimes-difficult "1990s and beyond" part of the Flying Nun story. Spoiler: there is a happy ending.

And staying with the Nun vibe (yes, yes, I know – the album was self-released in the first instance), this clip posted late last year came to my attention this week. It's a version of The Gordons' 'Machine Song' arranged in six parts for cello. Arranged and performed by Christel Vinot, recorded and produced by Jem Noble, video editing by Christopher Eugene Mills. It's very cool:

And in a diferent vein to, well, pretty much anything, Blair Parkes has this single-shot video captured at Ngakawau on West Coast. It's a preview from his forthcoming Saturations album, and it's warm like a wood fire.

My internet friends at Rock 'n' Rolla Soundsystem have a record coming out next week, and the A-side is this superior mash-up of Biggie Smalls, the NYC Peech Boys and the Bee Gees. This is fun!

It was good of Lorde this week to give a boost to this remix of 'Green Light', created by a local crew at Red Bull Studios in Auckland. I like this, but it's still not the nine-minute old-school epic I'm looking for ...

And a new Karim remix of the Jamie Principle epic, for those of you with long dance memories. Free download!