Back when Apple Music launched I went into some detail about what was good about the new service, and what was very bad.

For all my frustrations, I became a paying customer when the three-month free trial of Apple Music expired, and I have been using it. So I was very interested to see what the first big refresh of Apple Music, both in Mac OS and in the new iOS 10 would bring. And the news is, it's substantially better.

But first, it wouldn't have been Apple without an iCloud fuckup. After a smooth install of  iTunes 12, a message appeared warning that iTunes was unable to connect to iCloud Music Library and to try again. Tried a couple more times: same result. So, unlike people on the internet who started panicking and trying stuff, I figured it was probably a load issue and that I'd try again in an hour or two. Which I did, and it was fixed.

What wasn't fixed was the principal matching screwup I've been able to identify from the initial iCloud Music Library calamity: all three volumes that I own of the M&M remixes by John Morales have the same track listing in iTunes. That may be a reflection of the sometimes-ropey metadata from Bleep.com, where I bought the tracks, and I can just delete what I have and re-import the original files (they're still somewhere in my Downloads folder), but I had kind-of hoped that iCloud would clean up its shit on its own. Oh well.

The good news is, the user interface design in both iTunes and the iOS 10 Music app is out-of-sight improved. The tiny wee fonts, buttons and contextual menus in the latter are all bigger. Much bigger. And the organisation makes more sense. No longer are "Library" and "Playlists" two different things. Playlists are, logically, a part of the Library. 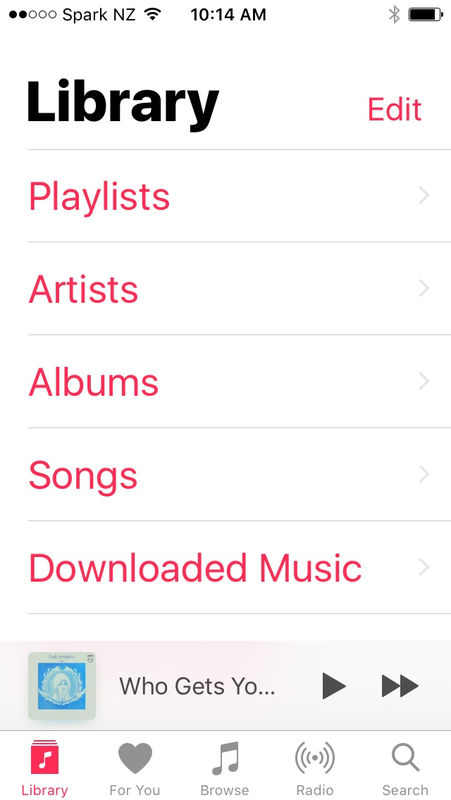 This also makes it easier to identify and get to music stored locally on my phone if I'm in an offline listening situation.

You'll also notice that the confusing – and functionally identical – "New" and "For You" sections have been replaced by "For You" (which actually sees some decent algorithmic action going into a new music playlist based on my recent activity, although as Macworld points out, it's still not as good as Spotify's see-into-your-soul Discover Weekly) and "Browse", which is where you go to see what's new and search for stuff.

The paradigm is the same in the new iTunes too. And if I want to add a song or album in Apple Music to my Library, there's a fuck-off big blue button marked "ADD". If I want to add a track or album to a new playlist, the "New playlist" option is now at the top of the contextual menu, not right down at the bottom.

What would make it better? 1. Being able to instantly add an album as a new playlist to an existing playlist folder (say, one called "2016 Albums"). 2. A list of "recently updated playlists" right at the top, just under "New playlist", so I don't have to scroll down through every expanded playlist folder in my Library to add another track to a killer playlist I'm building. 3. Hey, why not give me the option of showing my Library's playlist sidebar while I'm in Apple Music and let me just drag tracks over into it, in time-honoured fashion? That's way better than holding down the mouse button and navigating through the pop-up menu.

But yeah, in general, it's a shame this wasn't the the Apple Music that Apple launched in the first place, because it's bolder, clearer, more logical and more enjoyable to use. There's a roundup of other changes here.

And there's one other thing that I might be the only person in the world to notice and appreciate. For some time, I've used one or more underscore characters to toggle a playlist or folder up and down the list for easier access. (I know, I know, it's a dirty, dirty thing to do, but I'm not a librarian.) But while iTunes sent underscore-prefixed playlists to the top of the list, the iOS Music app relegated them to the bottom. Now, the Music app sorts the same way as iTunes. Hallelujah.

There has, of course, been another music-related Apple controversy of late: the fact that the new iPhone 7 does away with the old headphone jack. Cue outrage across the whole flaming internet.

Well ... I can actually see both sides of this.

Apple actually published a spec for headphones using the Lightning connector back in 2014 and it's not the only manufacturer to be heading in this direction. The dropping of the headphone jack might be like Apple doing away with the floppy drive in the first iMac: a crazy move that changed the industry. And the audio jack is a century-old technology.

Apple has been talking up the fact that losing the jack makes it possible to make the phone thinner and easier to waterproof. I guess it probably doesn't want to play on the main actual benefit of only having a digital audio output: it puts an end to the shitty little Digital to Analog Convertor (DAC)  squeezed into its mobile devices. Any plugged-in headphone experience with an iOS project has hitherto been limited by the quality of a DAC designed for small size and low power, rather than quality. The most expensive headphones in the world faced the same limitation as a $10 pair of earbuds.

Now, the DAC and the amplifier will be in the headphones, so you'll eventually be able to buy third-party headhones or buds with a very high-quality DAC built in – assuming you want to pay for them. The all-digital path should make things like noise cancelling and spatial sound better too.

On the other hand ... Apple licences the use of the Lighting port, adding $US4 per device to manufacturing costs. So that's slightly more expensive headphones right there anyway. (Note that Lightning-compatible earbuds and a dongle to convert for legacy headphones ship with the phone.)

But the Electronic Frontier Foundation is among those to note another implication of Apple shifting everything to a port it controls: it removes the "analog hole", the traditional refuge from oppressve digital rights management (DRM). DRM can't limit access via an analog output. The EFF briefing on it is headed: Analog: The Last Defence Against DRM.

Apple’s motivations for abandoning the analog jack are opaque, but likely benign. Apple is obsessed with simple, clean design, and this move lets the company remove one more piece of clutter from the phone’s body. The decision may also have been a part of the move to a water-resistant iPhone. And certainly, many people choose a wireless listening experience.

But removing the port will change how a substantial portion of iPhone owners listen to audio content—namely, by simply plugging in a set of headphones. By switching from an analog signal to a digital one, Apple has potentially given itself more control than ever over what people can do with music or other audio content on an iPhone. We hope that Apple isn’t unwittingly opening the door to new pressures to take advantage of that power.

And it's all true. This does raise the spectre of content owners being able to control the use of their works in new ways:

In other words, if it’s impossible to connect a speaker or other audio device to an iPhone without Apple software governing it, then major media companies might pressure Apple to place limits on how Apple’s customers can use their content. Because U.S. law protects digital rights management (DRM) technologies, it may be illegal to circumvent any potential restrictions, even if you’re doing it for completely lawful purposes. There would certainly be a precedent: big content companies infamously pressured Apple to incorporate DRM in its iTunes service.

Well yeah, but the reason the iTunes Store caught on is that its DRM was vastly less irksome than that being foisted on consumers by Microsoft and others. Steve Jobs managed to get the music companies to agree to a more transparent, persmissive DRM model than they really wanted – and that's why digital music sales started to work. Before long, even the industry stopped caring about DRM on paid downloads and it went away. It didn't make sense.

Where there is DRM is on tracks from Apple Music, Spotify or any of the other subscription services. Even if you save Apple Music or Spotify tracks to your device, you can't can't just copy them and play them somewhere else. So potentially, there could be a bid by content owners to stipulate what devices could be used to consume their content – with the specific aim of preventing stream-ripping.

Further, any attempt to get around that restriction would breach the ban on interfering with a technical protection mechanism in copyright laws in America, here and elsewhere. And restrictions apply to uses for which there are explicit exceptions: either preventing fair use or making it subject to fanciful rules about getting a librarian to do it for you, as is the case in our Copyright Act. As Jonathan Mosen (who is blind) has pointed out on this site, copyright blocks are the enemy of accessibility when it comes to television, especially in the case of the "appalling in every respect" Sky Televison.

The closing of the "analog hole" does make this possible: but is it likely? Only a small part of my music listening on my iPhone is actually done video the audio jack these days. I AirPlay music either to Apple TVs connected to two different Onkyo receivers (which have, I am told, very good DACs in them) and to a Sony midi-system in the kitchen, which supports AirPlay. If I'm travelling, I have a groovy little Sony Bluetooth speaker for the hotel room.

There are also, of course, any number of wireless Bluetooth headphones available for mobile listening with the iPhone 7 and every other smartphone. Is Big Music really going to get in and control the Bluetooth spec? What leverage would it exert to do so? It's not like Sky TV, which owns and thus controls every device with which its service is received.

So ... yes, the closing of the analog hole does theoretically allow content owners to mess with the rights of music consumers. There is no doubt about that. But history says that content owners generally don't get what they want.

Speaking of streaming: it appears that Soundcloud Go has just (unless I've missed something) launched in New Zealand.

It promises no ads (there are no ads on NZ Soundcloud anyway) but the main offering for your $12.99 a month is probably offline listening of all tracks, via the mobile app. Good for keen Soundcloud users (there are lots of mixes and stuff I'd like to hear at better than 128k), but its hard to see how they can take on the comprehensive catalogues of Spotify and Apple Music.

The Laneway 2017 lineup has been announced. I don't ever really get the point of Tame Impala, but I've been checking out Bob Moses and Tourist and I'm pretty excited about them. Lots of indie electronica festival-fare, basically.

The Wireless interviews Street Chant's Emily Edrosa on breaing up the band. Their farewell tour hits Whammy Bar tonight and Tauranga and Wellington next Friday and Saturday.

Someone's digitising all seven issues of the long-gone bFM magazine The Book of BiFiM.

The Guardian celebrates this month's 40th anniversary of 'I'm Stranded' (although as Ed Kuepper has noted on Twitter, the 7" was actually pressed up in June 1976, it just took a while for anyone to notice).

Graeme Jefferies has a memoir coming out.

Tangerine Dream apparently inspired the people who composed the soundtrack music for Stranger Things. And now the Germans have repaid the compliment by recording the own versions of the themes they nspired. It's all on their Soundcloud and it's like this: