No one should be at all surprised at this week's news that the King's Arms property has been put up for sale. That was the clear implication of the pub and its carpark being designated as a Special Housing Area back in April. You can read my post about the fairly confusing series of statements made in the days that followed the designation.

The upshot of it all is that Maureen Gordon, the formidable publican who has owned the King's Arms business and building with two partners since 1993, was clearly considering her future. And fair enough, too. She's not getting any younger and she owns a very valuable property. As the property listing says:

“It is zoned Mixed Use, and under the Auckland Unitary Plan, this benefits from an additional height overlay allowance of 32.5m. This is one of the most favourable height overlays in the city fringe.

“The proposed new 32.5m height limit is considerably higher than the current mixed use zoning which has a maximum height restriction of 15m.

That's up to eight stories. So what happens now? That's a little complicated. Unless the developers who applied (with Maureen's permission) for the original SHA designation have applied again to have it extended as allowed by a recent law change, the SHA (which also includes two neighbouring properties, 11 and 13 Karaka Street) will expire a year after it was granted –ie, next April.

The new Unitary Plan zoning actually offers the right to build two stories higher than the SHA designation did. But assorted nimbys have filed court challenges that could delay the Unitary Plan being coming into force for up to a year. So there could yet be a gap between the site being sold and the new owners actually being able to develop it.

Whatever happens, we are, sooner or later likely to lose a live music venue that is important to multiple local music communities and also works for a certain tier of international artists. The current licence would be sold with the building and the older part of the pub is covered by a pre-1944 demolition overlay which makes the demolition of the building a discretionary activity. So it would be the subject of a resource consent application which the council may approve or decline.

It's quite possible that the heritage part would therefore be preserved in some form, but I don’t think that it would be likely to continue to operate as a venue for loud music. It would more likely return to its original status as a neighbourhood corner pub: 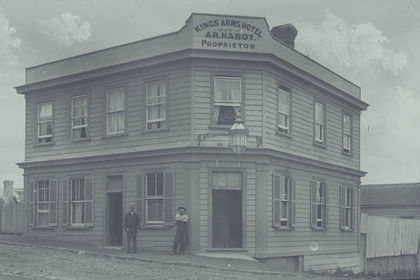 Because, let's not forget that until the motorway junction drove out as many as 30,000 people, this was a residential neighbourhood. That's the KA circled there (thanks to Patrick Reynolds for the pic): 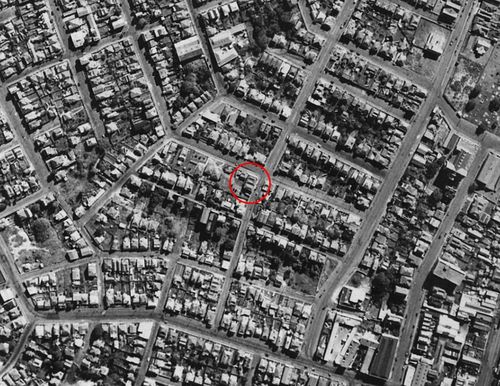 A lot of people lived in Newton and we are going to see some of that residential population return in the next 10 years. That is not a bad thing.

The forced relocation of so many local residents in the 1960s and 1970s had another effect: it spelled the end of Karangahape Road's identity as a mainstream department store destination. And when the motorway split K Road, it stranded the west end of the ridge. It was pretty much a disaster for the existing merchants – but it led to the red-light era and thence the edgy, bohemian K Road we know and value today.

I think we need to start having a serious discussion about cultural infrastructure as residential building returns to this part of town. Because it's quite possible that this isn't the only venue at risk. The Powerstation only opens for shows three or four times a month. It could be used more often, but its owner-operators, Muchmore Music, demand a pretty substantial room hire fee, which isn't economic for many shows. They seem committed to running a venue, just not very often.

But when the City Rail Link opens in five years time, the venue will be just up the hill from the redeveloped Mt Eden station. It's going to be an attractive place to live and it's easy to see the owners being tempted to sell up for residential development.

What the King's Arms and the Powerstation have in common is that they are reasonably large rectangular boxes, which makes them ideal rock 'n' roll venues. That's a hard kind of building to find – and an even harder one to build – in the current environment. While the Wine Cellar and Whammy have done a good job of making the most of their space and Galatos seems to work well, the only real "big box" on K Road is The Studio.

Let's be honest about The Studio: it's a former nightclub that really has its drawbacks as a live music venue. It  needs its insides ripped out to remove the irksome bottleneck that makes it such hard work to be at sometimes. Can its owner, John Grant, afford to do that?

Here's the thing: Auckland got another new theatre last week, the $36 million Waterfront Theatre in the Wynyard precinct. More than $4 million for that facility came from Creative New Zealand, with further contributions from ASB Bank, Foundation North, AUT and many private donors. It's a marvellous achievment for the Auckland Theatre Company, which has been without a home for 10 years.

Is it time to start thinking about taking music seriously as culture too? The person in the local government scene who is currently talking like that is mayoral aspirant Chloe Swarbrick. She has an Arts, Culture and Nightlife policy with some good ideas in it. The simple fact that she's saying "culture" and nightlife" in the same sentence is pretty special in itself.

Barring a monumental upset, Phil Goff will be Auckland's next mayor. There's not much chance of him suddenly becoming Groovy Phil the Nightlife Mayor. But I'm seeing a job for Chloe right there.

Meanwhile, here's some good news on the music venue front: REC is a record shop and venue cooked up by Connor Nestor and Samuel Harmony. It's not uptown but downtown – at 38 Customs Street East – and it opens to the public on Friday October 14, with a show by Cut off Your Hands and Yukon Era. Scuba Diva and Purple Pilgrims play the next night and there's a record fair on the Sunday. That's an excellent first weekend! 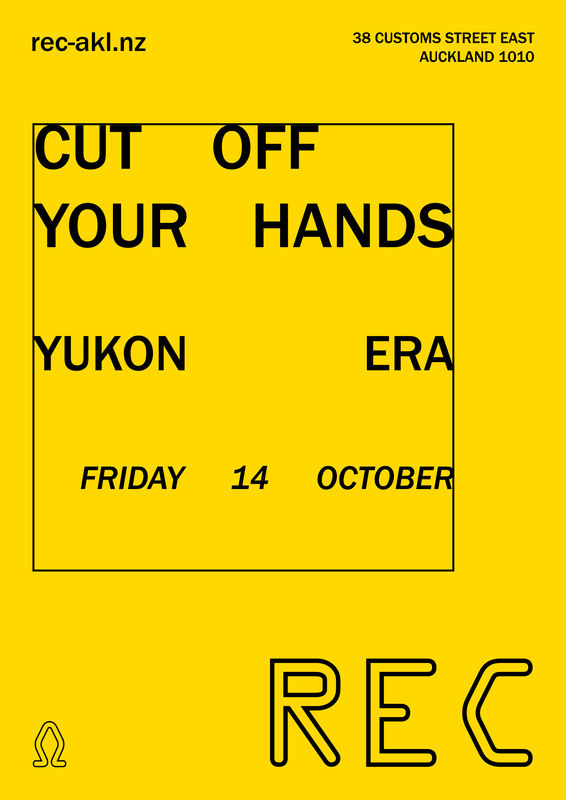 Connor tells me their "ultimate goal is the make this a space where people can hear music in context. Artists have a brilliant time and people enjoy themselves." He sounds pretty excited about the Martin Audio Wavefront sound system they're preparing to install.

In case you were wondering, this weeks music post isn't late because I went to the Apra Silver Scrolls after-party last night (although I did), but because some monster scheduled me a 9.30am board meeting.

But last night was pretty special. The returning host John Campbell was relaxed and eloquent and the show itself felt quite different to last year's slightly strained anniversary award. Back then, he was between jobs. This year, he was the face of a public broadcaster that continues to reinvent itself in interesting ways. Perhaps we're all in a better space.

I've never seen the honouring of a Hall of Fame recipient become the keynote of the evening in quite the way that the celebration of Moana Maniapoto did this year. From Hinewehi Mohi bursting into tears before she could even begin her tribute, to Moana's own soulful speech (including a fine and graceful shout-out to her ex-husband Willie) to the remarkable scenes when she returned to the floor of the event, it was the centrepiece of an evening that was, more than anything, a celebration of Maori creativity. There was quite a lot of crying going on for quite a long time.

Here's the Audioculture profile of Moana that went up yesterday. And here's the speech:

I also thought it was remarkable that the musical tribute to Moana, both in te reo Maori and English, was performed by Soccer Practise, a band from quite a different tradition to that from which Moana emerged:

Oh, and I think my favourite of the finalist cover versions was the "supergroup" Oystercatcher, who played the Phoenix Foundation's 'Give Up Your Dreams'. I don't think I've ever seen Steve Abel shimmy like that!

The showcase was facsinating too. It was essentially a look at how artist development happens now. It makes more sense for labels to sign and develop individual artists rather than bands, and so it was that three young men were presented.

The first, Mitch James, was signed while he was away trying his luck (and kind of starving) on the streetcorners of Europe, off the back of YouTube videos like this.

Yes, doing cover versions of hit songs and posting them on the internet is a reasonable path to a recording contract these days. He's got the patter and the vocal projection of a busker too, which doesn't hurt.

Next up was Benny Tipene, who is both freakier and seemingly more comfortable with himself than he was when we first heard of him on a TV talent show. Like Mitch, he's been co-writing some songs with Dave Baxter (aka Avalanche City), who is signed to Sony/ATV for the pubishing that represents the bulk of his income. They're good, sound pop songs and I wonder if this is the start of a little bit of a hit factory.

Last up was Thomston, who is quite a different kind of artist – less identifiably Kiwi, sort of alt-pop-R&B. He's managed by Scott Maclachlan, Lorde's fomer manager and was the subject of quite a scramble to sign him last year – he eventually went with Sony Music Australia. He has already built up quite some momentum in advance of his debut album, Topograph, which is out today. I think he's a significant talent. 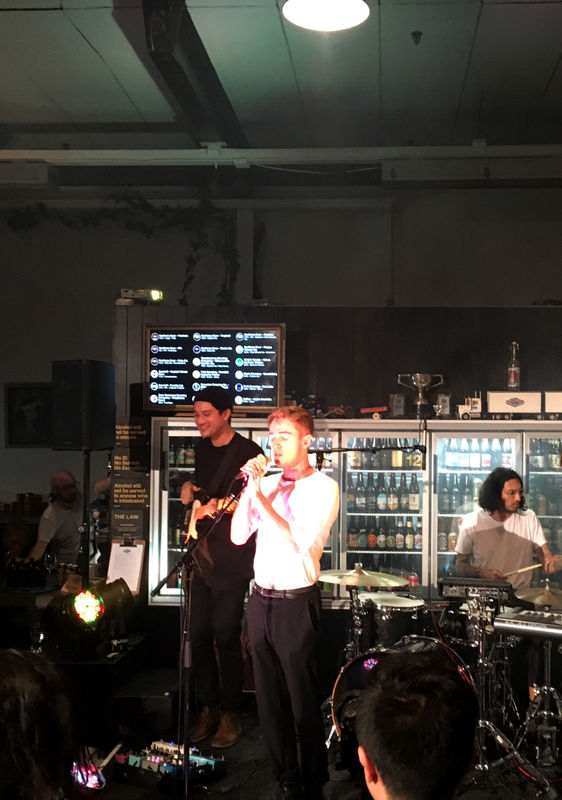 Streaming and buying links are all here.

So, speaking of music and culture, Anything Could Happen: Strange Echoes of the Dunedin Sound got announced this week.

Anything Could Happen is a performance, music, and multimedia immersive environment that reimagines moments from the legendary early-80s Dunedin music scene in a way that celebrates the city’s current crop of culturally diverse artists. The project will unfold over three days at the historic Dunedin Athenaeum and Mechanics' Institute, with satellite events in Christchurch and two popular arts venues in Los Angeles, California.

The aim is to appeal to those who are already familiar with this wonderful music, while introducing a broader audience to the magic of the Dunedin Sound. The event will also spotlight the present-day and emerging artists in theatre, music, video art, dance, photography, and new media who are keeping Dunedin a vibrant cultural centre.

It goes down next year and there's a Facebook page you can like to keep up with developments.

So Spotify is preparing to buy Soundcloud. Soundcloud has really been needing something to happen and perhaps this might be a good thing. But for now, this practice of posting "previews" of tracks on a music discovery site that currently offers no compelling case for a paid subscription to unlock them is just really irksome ...

And new A. Skillz!