I wrote a little while ago about how riding an e-bike changed my experience of cycling. I got places more quickly and with less effort than I initially realised, thanks to the electric boost. And that, in turn, influences my decisions about whether I'll ride or drive.

If I'm short on time or low on energy, I'll be more likely to ride if I'm getting some of that sweet electric assistance. And that'll take a car off the road with the attendant benefits of that. I think it's brilliant that we're already seeing more e-bikes on the road thanks to Mercury's e-bike promotion. I know it's been good for participating retailers and my sense is that it's getting more women onto bikes.

I plan to join the revolution too. But I'm perhaps not a typical case. I don't have a commute, unless you count lurching from the bedroom to my home office, which is a very short distance.

There are others like me. A survey conducted for the Portland State Transportation Research and Education Centre asked questions of 553 regular e-bike riders. Seventy three per cent of them said they rode an e-bike to different destinations (that would be me), 65% wanted to replace some car journeys and 60% liked an e-bike because they lived in a hilly area (also me). And more than 70% were, like me, older than 45. Nearly all had ridden a standard bike at some point in their adult lives, but people rode markedly more often after getting an e-bike. Nearly a third continued to ride a standard bike daily or weekly alongside their e-bikes (which will very likely be me). So there's a picture there. 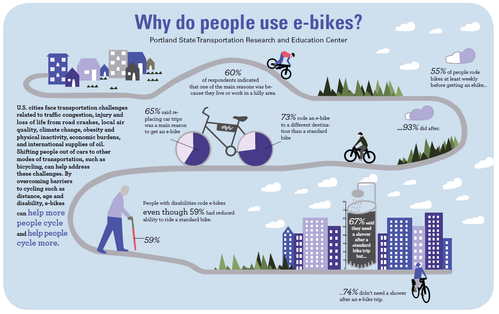 But what about people who might be motivated to take up an e-bike but don't want to ride like a twentysomething cycle courier? What do they need? They need bike lanes. Infrastructure is, I think, crucial to even broader e-bike uptake. Happily, that's starting to happen, in Auckland anyway. Auckland Transport's Urban Cycleways Programme has already begun to spawn both commuter routes, which will be fully-protect cycleways where possible – but also local paths for local journeys, often during the day.

I've debated with some advocates who regard the latter as a soft option, because the local paths often pass through parks and other open spaces, rather than staking a claim on road space. And I disagree. Local journeys matter and riding through parks is nice.

But if we're looking to impact traffic congestion, we are talking about cycle commuting infrastructure – and there's a very clear correlation to be seen in the Big Kahuna of Auckland cycleways, the Northwestern. As the route is improved, more people use it. Between May 2015 and 2016, cycle journeys on the Northwestern increased 47%. I would expect we'll see a further increase when the Northwestern terminates in the K Road precinct and when the protected cycle lanes go in on Great North Road. It'll be easier and safer to ride to the city.

My friend, a woman my age, lives in Mt Albert and runs a business in Newton. It's a little bit far for her to ride a conventional bike, but she bought one of the SmartMotion e-bikes and cruises in on the Northwestern. It works.

Is it a given that people switch from cars to bikes if you do all this? No. There's some evidence that London's huge cycleway programme has brought out more cyclists, but no fewer cars. But London, as a mega-city with a very concentrated centre, is something of a special case. Elsewhere, there's evidence that better provision for cyclists means not only fewer motorists, but happier motorists.

So, in summary: my experience is that an e-bike inclines me to make more and longer cycle journeys, which replace car journeys. An e-bike also influences my riding behaviour – I'm less likely to want to duck and dive, more likely to want my own lane. I think it's pretty clear that e-bikes  do encourage people to commute by bicycle, and I actually know people for whom that is the case. So bring it on.

This post is sponsored by Mercury. Details on Mercury's e-bike promotion can be found here.