Last night, at the BroadcastAsia conference in Singapore, Jai Waite won an Apollo Award for his work editing Attitude's short documentary Jimmy Wants a Job, which is about my son, James Rae Brown. Everyone involved is elated.

Here's a photo of Jai receiving his award, with Jim on the screen behind him. 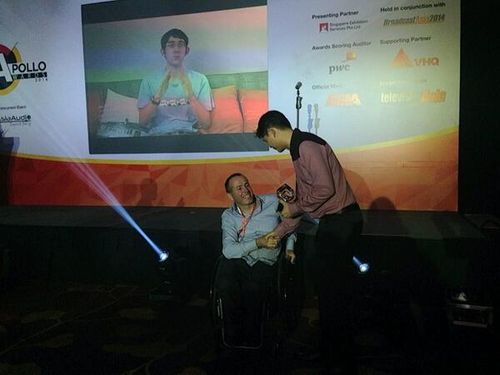 Jai was the only New Zealander to even be named as finalist in the awards. And what makes the result even more pleasing is the way he went about his work, which he explains here:

"We watched a lot of videos Jimmy had already posted online and we found he use's an editing style that's quite flat, which means he doesn’t move the camera, but compensates with a lot of jump cuts where he moves throughout the frame. We wanted to keep that flat motif up throughout the edit, but needed to do it in a way that would keep a flow going through the full 30 minutes.

"It was a case of riding the clutch between his style while staying true to the treatment we use for Attitude, and making it all fit to a 30 minute episode ready for Sunday morning broadcast.

"Another aspect, similar to a lot of the work we do, was wanting to be up front about Jimmy's disability and what it means for him in everyday life, while not making it the core focus - we wanted him to be the lead story teller in telling the audience who he is and what his story is."

The process of making this documentary wasn not always easy, and it sometimes weighed heavily on Jimmy himself -- he really exposed himself and he did it because he believed that doing so would help other people like him. And it has.

Last week, the Film Festival people got in touch to ask him to volunteer again, which is great. He still has his job at the Bridgeway, although that's down to a seasonal half a day a week at the moment. A lot of people got in touch after the programme screened with praise for both the doco and for Jimmy himself, but it was Kelly Rodgers at Rialto who actually gave him the job he was after. He'd really like some more work now. Just putting that out there.

And to conclude: Jim's latest short-short film (forgive the misplaced apostrophe, he'd have to take down the clip to fix it and that doesn't seem worth the bother):