You go Helen! The nation owes the Prime Minister a debt of gratitude for nixing an Australian plan to have the ghastly mullet-headed Australian soft-rocker John Farnham play at Anzac Cove. If the duty of leadership means anything, it means making a stand against the surrender of taste. It means saying no - enough.

It has long been our role in this enduring comradeship in arms to save our Australian brothers from their own gaucheness. Sometimes it's not easy, but we do it because it's right. Because if we tolerate this, next year it'll be Savage Garden. Because when we remember our old soldiers, we do not want so see this.

So Mr Farnham's manager is upset. Hah! Do we take instruction from a man who played himself in Neighbours? No, my fellow New Zealanders, we do not.

Of course, there are those among us - a sort of axis of the insipid, a militia of the mawkish - who do not see it that way. The Act Party's Rodney Hide told the Herald that younger visitors to Gallipoli wanted the anniversary to reflect "contemporary tastes". Ahem. "Younger", Rodney? "Contemporary"? Yo mama! Literally!

And Don Brash described the Prime Minister's attitude as "elitist". Well, so be it. Somebody has to set a standard and stick to it. Ask Trevor Mallard.

This is not, I must emphasise, a dismissal of the idea that song can carry our spirits. The claim that the Finn brothers were in line to play the 90th anniversary commemoration appears to have been exaggerated to the point of fabrication, but that might have been alright. I can imagine the pure, level tone of Neil Finn's voice drifting poignantly across the waters of memory, joined in harmony and solidarity by that of his big brother. But Mullet Man? No, no and thrice no.

Besides, if we're going to surrender taste, we should do it at the cricket. Last night's 80s-themed Twenty20 international caught alight from the moment that Hamish Marshall's extraordinary afro entered the arena (indeed, so high and fluffy was his hair that his actual head must have been a fire risk). I'm undecided on the merits of the new quickie format as actual cricket, but as a Thursday night out for 30,000 Aucklanders it was tremendous. Every time Marshall and his afro neared one of the boundaries, the crowd roared in salute. It was the Sevens of cricket, and Ricky Ponting was its batting star. I wore the beige.

Anyway, further to this week's discussion about telco sillybuggers. If you want an illustration of what Telecom's de-peering (and, any moment now, TelstraClear's) actually means, take a look at this traceroute from a Telecom JetStream connection to a server connected to the Wellington Internet Exchange:

For non-technical readers, let me explain: because Telecom de-peered from the exchange, all traffic between the two points (physically about a kilometre apart in Wellington city) goes via Australia. And, so far as I can tell, whoever runs the target server will be paying international transit rates.

There are various other niceties of local peering relationships that I won't go into here, in part because I struggle to get my own head around them. But if you want to know more, there are video presentations on the topic by Bill Norton and Joe Abley from the 2005 NZNOG conference.

An excellent parody of Apple Computer's marketing - thanks to Andy Pickering for the link. Hey, I can laugh at myself ...

Meanwhile, the Dog Biting Men waka pushes out into a sea of irony. Kids, please check with the bill-payer first.

And finally, whilst not disagreeing with a recent Public Address guest blog expressing the view that changing the flag is hardly the most compelling use for our present energies, I did find the flag design suggested by Chris Knox in a Max Media cartoon more appealing that any of the candidates touted around the press lately: 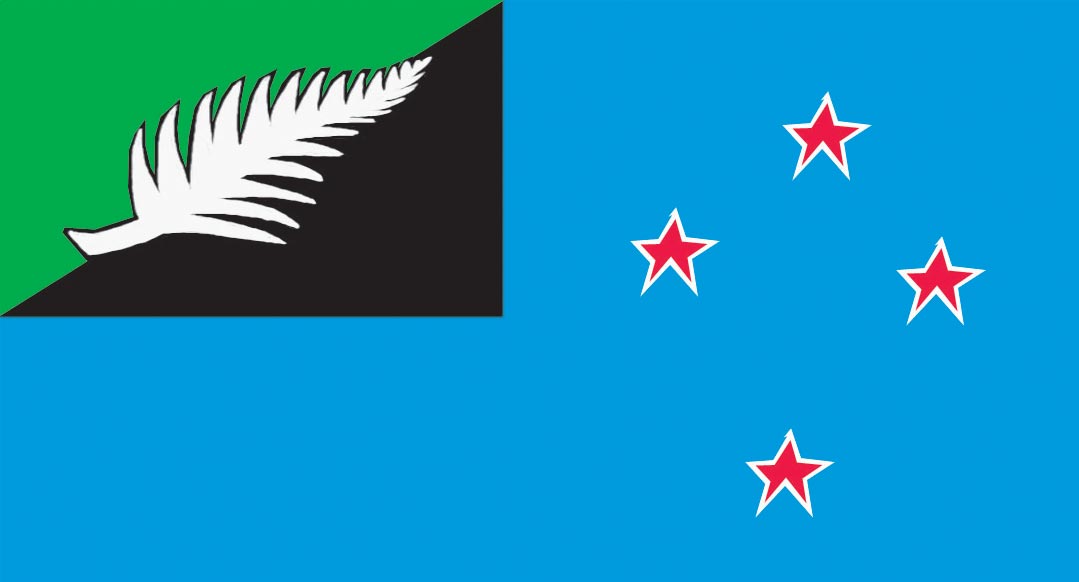 Chris also claimed to have the new national anthem in the bag, but I think the way 30,000 people can swing in behind 'Victoria' and 'Why Does Love Do This To Me' rather strongly suggests that that gig goes to Jordan Luck ...