Longtime readers of this site may be aware of my occasional bursts of fulmination about overhopped stunt beers -- and my calls for New Zealand craft brewers to produce more sessionable brews in the classic best bitter style I think suits life in New Zealand. I might as well have been shouting into an empty fermenter for all the difference that made. Until now ...

I was approached a little while ago with an invitation to conceive of and oversee my own own "Media Brew", to be brewed and presented at this year's Beervana in Wellington. So I said, yes, I would very much like to make a delicious best bitter with a malty base and sweet heathery tops, much like, say Fuller's London Pride, Emerson's Bookbinder or Galbraith's Bellringer.

I was paired up with the North Shore's Deep Creek Brewing, who make beers for their own bars from a facility in Silverdale. Last week, I went up to meet my personal brewer, Hamish Ward, and oversee the brew. 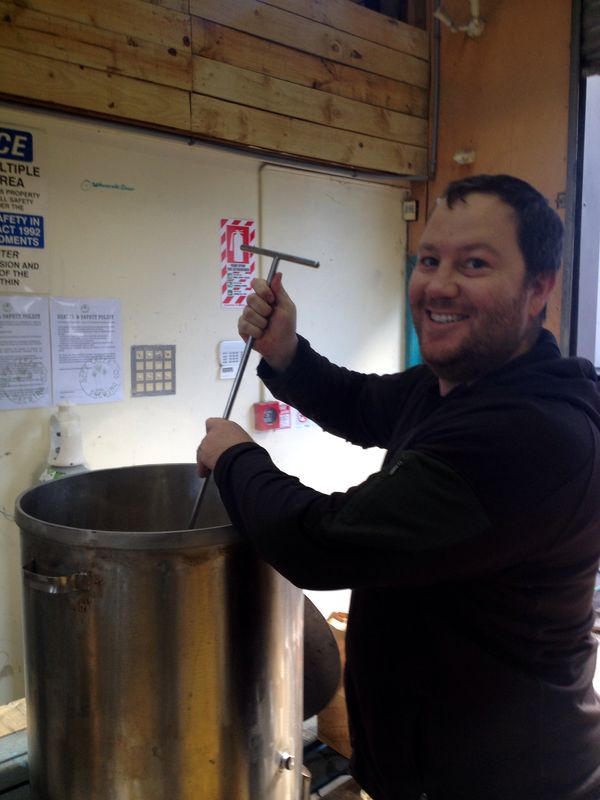 Hamish, I discovered, is a Public Address reader, and thus a very nice chap. He is also a scientist, and when his biotech research project for Fonterra lost its funding a while ago, he accepted an offer to bring his considerable home brewing expertise to Deep Creek. He also brought along his home brewing kit, which was what we used to make our 100 litres of bitter. 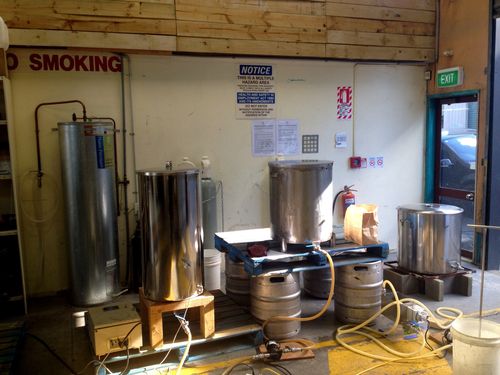 Before you ask (and because people already have), the two tanks on the left are hot water cylinders, and the smaller of them supplied the mash tun, where the grains and malt were heated. 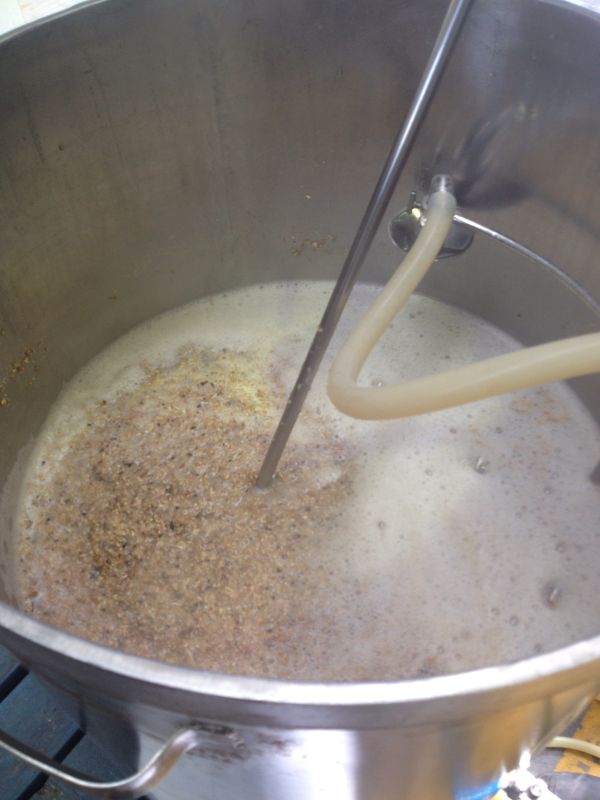 During that process, a fine mesh gravity filter separated the grain from the liquid, which ran into this little steel box. 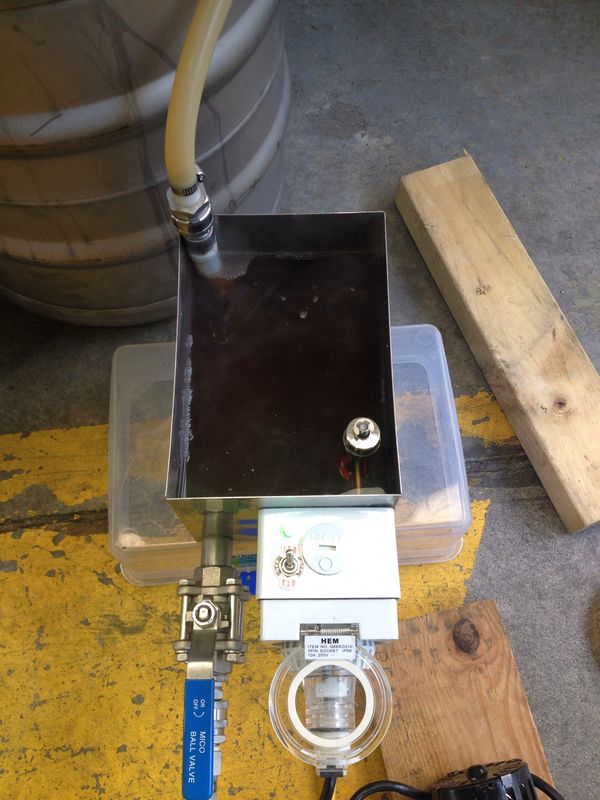 When Hamish deemed that process to have run its course, the liquid was redirected into the kettle, where it boiled for a couple of hours, to ready it for the fermenter. 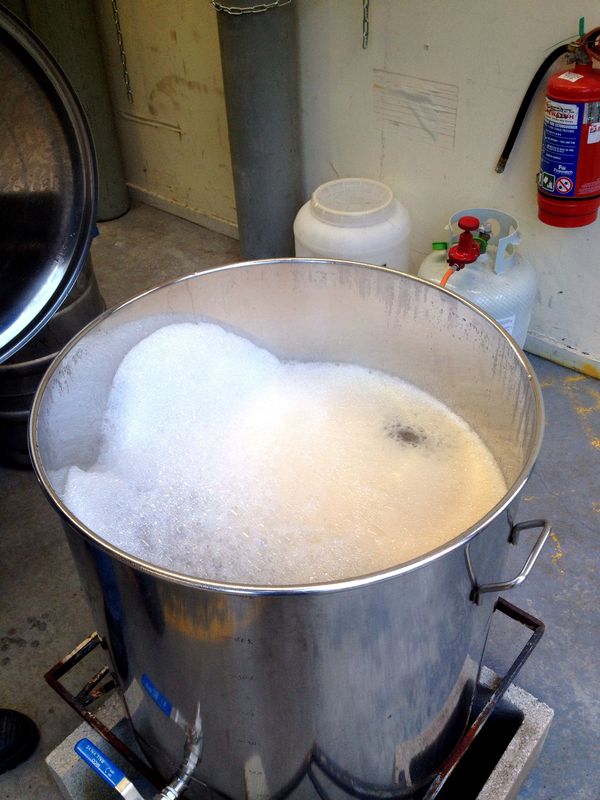 I had never realised that hops can be added to the kettle at various times in the process -- from the beginning of the boil to the very end -- depending on what role the brewer wants them to play, and whether they're there for flavour or aroma. 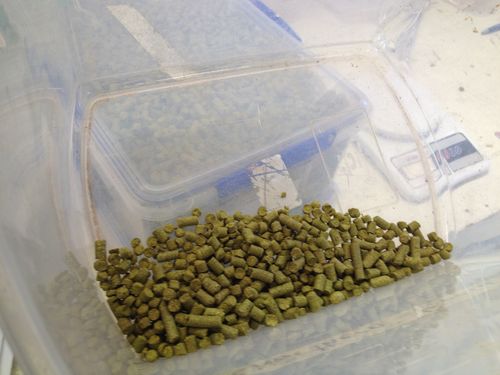 While this was going on, we progressed to a very important duty: a preliminary tasting for our special ingredient. The Media Brew rules dictate that a uniquely New Zealand ingredient must be used. We agreed on manuka, but rather than try and incorporate manuka in the actual brewing process -- which would deliver a nasty result if it didn't go well -- Hamish recommended we use a manuka flower tincture made by Justin from Zeffer Cider, who share a building with Deep Creek. 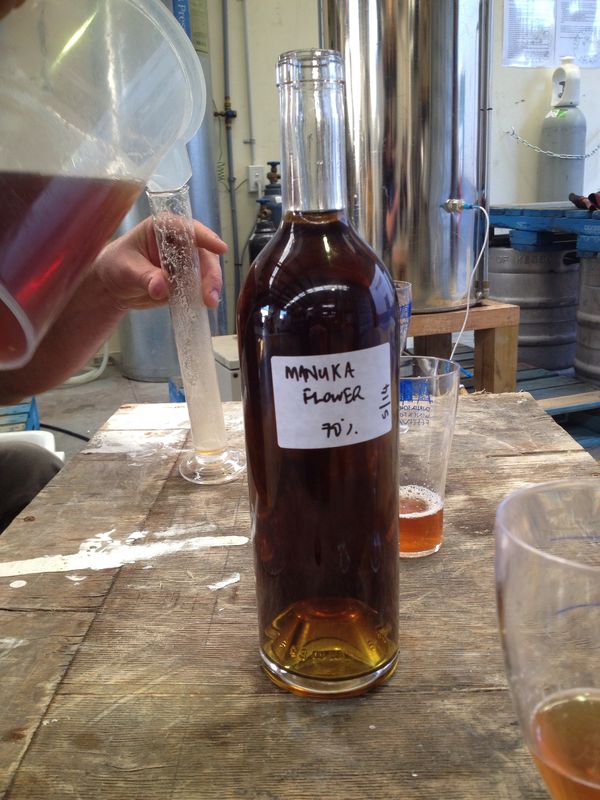 This is Justin, who takes his work seriously. 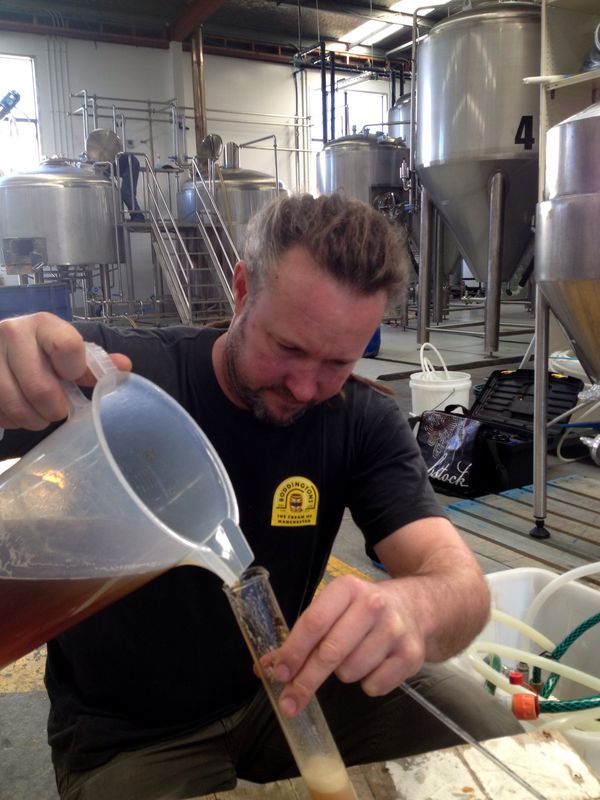 The tincture was fascinating. Straight out of the bottle it smelled like nothing so much as aniseed, but added to our test beers, it came up strikingly differently in each concentration we tried (1ml, 2ml and 2.5ml per litre), and reacted differently with each of the two beers. Hamish and I agreed that at 2.5ml there was too much of the medicinal scent of manuka -- too much of the stunt beer I didn't want to make. But at 2ml, the flowery esters came up in a nice balance with the malt -- the manuka was less a flavour than a potentiator of other flavours.

At that point, I had to head back for town but in a week or two I'll return for the final, crucial tasting, where we will make the call on how muchmanuka to finish with. I gather the fermentation is going well, although the cold temperatures have been a little bit of an issue. I have every confidence that we will be able to finish off a delicious beer suitable for enjoying in pints with yer mates, at a strength of 4%-4.5%. If you go to Beervana, please do try it and let me know what you think.