After the relative cold of Chiang Mai and the North of Thailand, it was nice to hit the Southern shores again, where life just seems that much more relaxed. 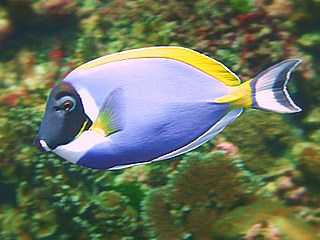 Powder blue surgeon fish - kinda like Dory but not quite

After a bit of googling, and a few phone calls, I’d booked myself in on a liveaboard dive trip around the Similan Islands, with a company called Wicked Diving. I’d chosen Wicked, because they seemed to have more of an environmental aspect to their operation – organic sheets and towels, biodegradable soaps and detergents, recycling, rechargeable batteries, that sort of thing – and while we were on the trip we spent one afternoon picking up refuse from a beach, and one dive cleaning up the reef. [Look out for a feature on Public Address Radio in the next week or so about the difficulties and benefits of trying to run a green dive operation in Thailand.] 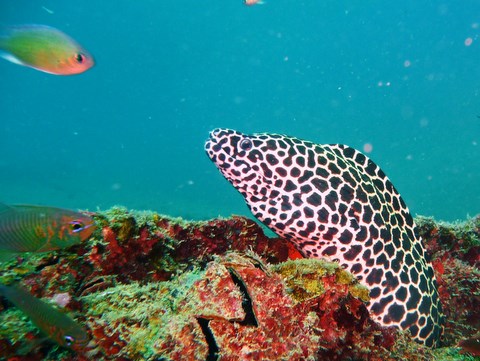 The Similans is a group of nine islands, a few hours boat ride from the mainland. It’s a national park – both above and below the water – and camping is only allowed on two of the nine islands.

I’d already done a couple of dives on Koh Phi Phi – see pictures in a previous blog – and while it had its moments, it didn’t quite scratch the itch I had developed from all these years of diving in our less-than-tropical waters. From the first dive at the Similans I was sated – although like good crack, only temporarily – the water, the flora, the fauna, the topography; everything was incredible. 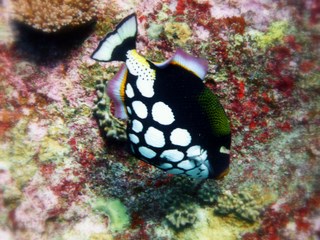 Fortunately I had eight more dives to suck up as much as I could over the next three days. The variety, particularly of the undersea landscapes (underseascapes?) was vast. From huge round boulders, protecting intimate anemone gardens – peering over the boulders was like watching a small, fishy soap opera – to gently descending coral-filled slopes and massive pinnacles. Each dive bought new treats, from lionfish and honeycomb morays, to turtles and triggerfish. 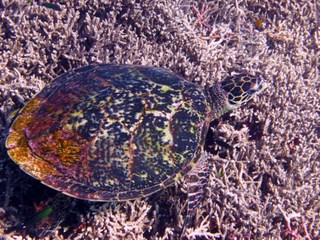 Turtle, of some description

Life on the boat was about as good as it gets. A sample timetable: 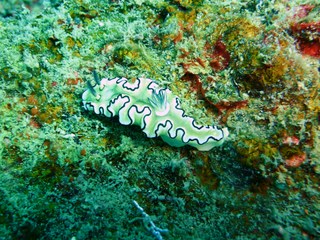 A Nudibranch, or type of sea-slug. Some divers go crazy over finding these little guys

Yeah, so after a couple days of this I was pretty happy. On day two I did my first night dive, which was something I’d been vaguely apprehensive about for a couple of years. As it turned out, it was fine, and when we turned off our torches and swam through the luminescence, green sparks flying off our fins, it was magic. Although clearly some people found it a little less relaxing; when we turned our torches back on, one of our group was about six metres above the rest of us (when you hold your breath in fear, you tend to ascend quite quickly). 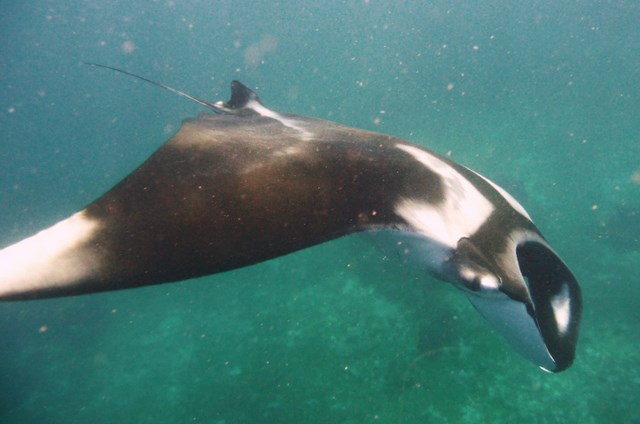 A Manta ray, or "devilfish"

On day three we left the Similans and head an hour or so north to Koh Bon. It’s a beautiful site, but there’s one main reason people dive here – Manta Rays. As with any diving there are no guarantees, and it was a little early in the year (they’re more common in April and May), but we had our fingers crossed. No one was allowed to utter the words though, and instead we all hoped for “Blackbirds”.

Mantas are the biggest of the rays (also known as ‘Devil Rays’) and can grow over seven metres from wingtip to wingtip, although between three and five metres is more common (and still farking huge). Everyone has different things they dream of seeing underwater, from rare sea slugs, to whale sharks, but for many, Manta Rays are it. 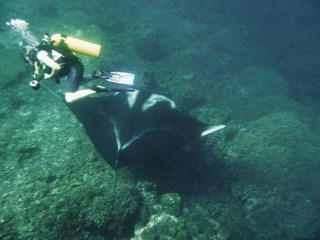 This was one of the smaller ones...

So as you can guess, our first dive of the third morning, we saw one. Back on the boat, all of us were buzzing. Many had never seen one before – certainly not the woman doing her Open Water course, for whom this was her very first qualified dive (ruined for life?), nor me, nor as it turned out our uber-experienced dive leader, Thomas.

The second dive at Koh Bon, half past ten, and we struck black gold again. This time we saw four Mantas in the one dive – three at once. I was busily taking photos of one Manta, a few metres ahead of me, when I looked down and the ground had turned black – another was gliding by only a metre or so beneath my feet, while another cruised over my right shoulder. 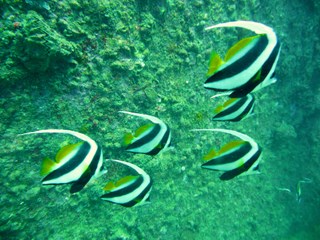 You can see the photos, you can look up videos, but nothing can compare to being in the water with these things. The biggest we saw was probably five metres from tip to tip; they cut an awesome figure through the water, a unique silhouette as the swim away, almost out of sight, and then bank in the distance, coming in for another close pass. That experience alone justified every hour of training, every piece of equipment I’ve bought, every dollar I’ve spent learning how to dive. It was, quite simply, one of the best days of my life. 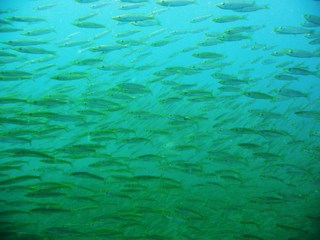 A school of juvenile barracuda

Back on the boat, motoring home to the mainland, everyone was in a dream. It reminded me of the back room of a certain nightclub I used to frequent in the late nineties – people lounging around on couches, huge, stupid grins on their faces. We were blissed out on the Mantas, and the next morning there was only one thing everyone had been dreaming about. 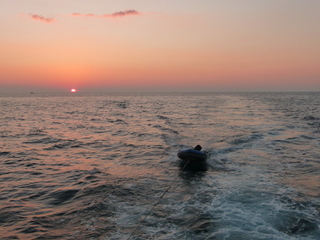 (Thanks everyone at Wicked Diving for an unforgettable trip, and Ben and Thomas for their skills as dive leaders).