Everything is moving very quickly indeed.

Last time I wrote I'd just found out I'd be going to Oxford at some point in the next year or so. Last week the call came in: I'm there in seven weeks. It's a bit sooner and, er, colder than I was expecting, but it's all good.

So there are flights to book, stopovers to arrange, laptops to purchase and warm winter clothing to invest in. The first two are taken care of, but if anyone out there has a good notebook for sale, or happens to be a major investor in say, Icebreaker, feel free to send me feedback.

Harry Potter & the Goblet of Fire: A review of sorts

My mate Ben and I went to see HP&tGOF last week.

The fourth of the Harry Potter films is apparently Not For Kids, receiving a PG13 rating in some jurisdictions and generally getting the thumbs down for anyone under 10. This is a shame, because it's by far the best (and darkest) of the films to date, and if you've got to drag your kids along to anything these coming holidays it'd be better if the film wasn't drowning in treacle.

At 157 minutes some say it's a bit long, but it was a breeze compared with the 730-odd page novel. Being a billionaire has done nothing for JK Rowling's ability to self-edit, I can tell you that.

Despite the age warning, my friend Lisa took an eight year old along, and by all accounts he loved it. Sure, he'll never set foot in water having been shown what lurks beneath (the underwater scene is fantastically thrilling), but I’m told for the most part, guardian was more nervous than the child. I suspect most eight year olds will cope.

I should add here, this recommendation is based on the natural assumption you don't mind your little ones turning into Satanists. That's right, it's the whole Dungeon & Dragons debacle all over again.

I played D&D when I was growing up, and while it did nothing for my adolescent love life ("But baby, I'm a Cleric with +17 Charisma, what's not to like?"), nor did it see me worshipping the Dark Lord. Sure, I've ritually sacrificed a goat or two, but who can honestly say they never did anything like that in their wild University days?

Look at the spooky list of similarities between Harry Potter and D&D. Spells… wizards… dragons. Wow, it's like they're both, um, fantasy or something! But wait. The scariest similarity of all: Unicorns. Creatures straight from Satan's workshop, surely… 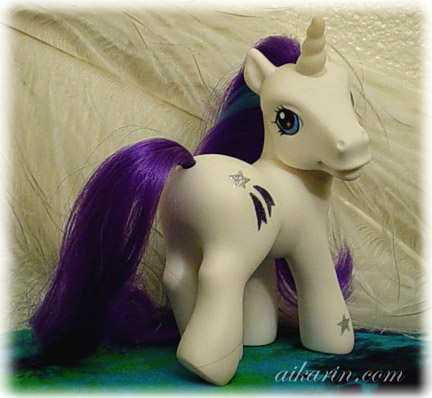 I'm interested to hear from any young women out there who played with My Little Pony unicorns growing up, and now find themselves projectile vomiting green matter, speaking in tongues, or able to twist their head 360 degrees.

If you're able to twist any other body parts significantly, feel free to drop me a line too. I won't call you a freak, baby.

Did I mention I have +17 Charisma?

Update: Great Christian comic dealing with the darkside of D&D addiction (thanks NZBC for the link) - wow, that was exaclty what happened when I played D&D too!

Update 2: I just went to an art exhibition on at the Whitehouse (yes, the strip club on Queen St) featuring inter alia My Little Ponies with vibrating devices inside them, and little speed control remotes coming out their arses. As far as I can tell, not part of the official Hasbro series but - somewhat disturbingly - not the first person to think of MLP's in a sexual way.