I freakin' love this time of year.

Okay, it's pretty stressful, trying to tie up loose ends (or not-so-loose in my case, with a Summer Tour starting in a fortnight, and an entirely new show to have ready for a launch early 2011...), dealing with the sort of humidity we'd normally save up and travel for.  Then there was that week where it didn't stop raining.

But that aside, Christmas time really excites me. Around November an earworm that's been hibernating all year springs to life, and I find myself humming "Deck the Halls" far too often.

I find myself smiling a lot more. I smile at strangers on the street, and they smile back. I strike up random friendly conversations with random friendly people. Rather than a frothing rage, the crippling traffic jams within a square kilometre of every mall or Warehouse incite only a Zen-like calm.

For a few weeks, life is like it should always be. And probably is, in small town New Zealand. But there's nothing small town about Auckland. Eating out on Ponsonby Road this week, my friends and I remarked how the place looked like Khao San Road; diners pack outside tables trying to escape the humidity, as throngs meander along, on their way to Franklin Road.

Closer to my own home, just before Sandringham meets Mt Albert Road, there's a little Oasis of Christmas cheer, as if one of the Franklin houses had enough and decided to move to the 'burbs. 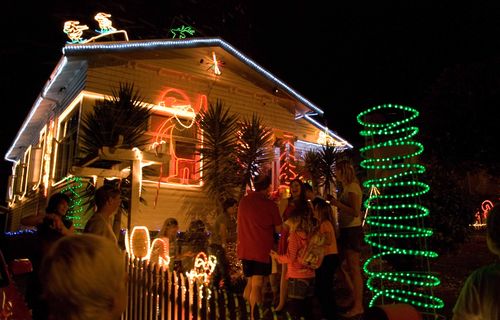 Cars line the road outside, as people are encouraged to wander inside the front gate and experience the full extent of the festivities. I pull up to take some pics on the way home from the Indian takeaway.

"Have you got any letters for Santa?" asks a young girl in a Santa hat. The granddaughter of the owner, as it turns out. "You can post them in there", she says, and sure enough there's a postbox marked Letters for Santa, which she opens to reveal a dozen or so notes already inside.

I introduce myself to the owner, John Peel (yes, he's aware), who has been making the effort for six years now, and seems to love hanging around outside, meeting the neighbours.

"It only took me two days this time," he says, pointing out that his decorations mostly consist of large installation pieces, rather than strings of background lights, which are apparently quite fiddly. John says he'd like it if some of the neighbourhood got into the spirit of things, although I quite like this vivid anomaly. I also feel slightly guilty - we don't even have a tree up at home - just a small string of glowing jandals. 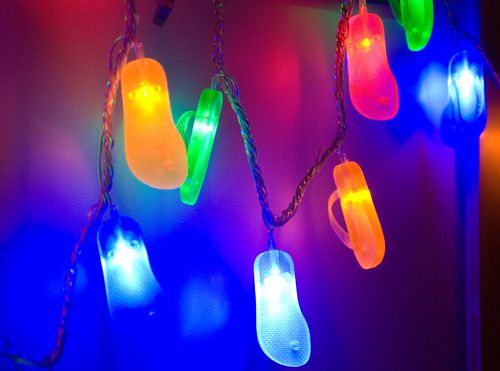 But I get into the spirit in other ways. Smiling at strangers. Remaining resistant to road-rage. Giving surplus seedlings or even a spare snapper to the old couple next door.

I do try and avoid the blatant commercialism of it all - apart from spoiling my niece and nephew, which I never need an excuse like Christmas to do anyway. At my suggestion, my siblings and I eschew buying presents in favour of something small and home-made. My garishly decorated gingerbread men (with real ginger!) have been handed out for the past couple of years, and there's always plenty spare for aunties, cousins and those other relatives who wouldn't normally feature on the gift list.

And so tomorrow night you know where I'll be. In the kitchen, wiping sweat from my brow as the smell of baking wafts through the house.

As much as I'd like to put a few hundred extra gingery guys in the oven for y'all, we might have to agree on something a little more virtual. So let me point out the delightful (and delightfully FREE) album by Avalanche City.

The very cute video of the single 'Love Love Love' (which would be my pick for #1  Xmas Single) can be viewed here.

And there's a link at the top of this blog to an MP3 of Dave (Mr Avalanche City) performing the same song acoustically on the last Public Address Radio for the year. It was a lovely moment in the wee studio.

Enjoy. And Merry Xmas everyone. Be good to each other.