The votes are in and counted. It’s not just a landslide. It’s unanimous. Obama trounces McCain by 21 votes to zero. No surprises there: this was a blind straw-poll in Miss Regina’s class, and New Haven is a blue city in a blue state. But as my second-grader’s multicultural public school classroom goes, so goes the nation?

We can hope. I’m dreaming of an Obama landslide. Because he is hope on a horsie, dammit. 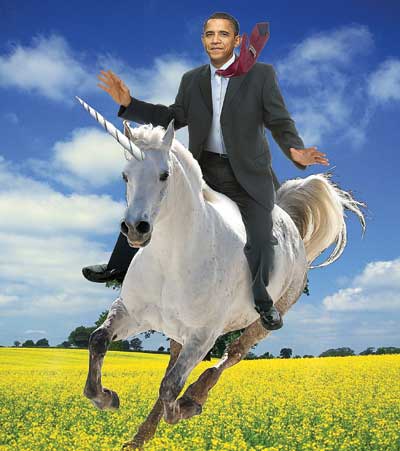 (Image swiped from Shakesville. I want it on a T-shirt, yesterday).

So I was downtown this morning, watching my older son’s class participate in the city’s annual Halloween parade for schoolkids. There’s often something grim and ominous about the calendrical conjunction of that ghoulish festival and the national election. But this year’s parade had the theme of recycling and alternative energy (yep, the Mayor is a Democrat).

There was something incredibly cheering about a thousand children dressed as recycling bins, solar panels, cyclists and trees and sunshine and wind and the planet Earth, parading through downtown with big grins on their little faces, chanting “Save Our Planet!” 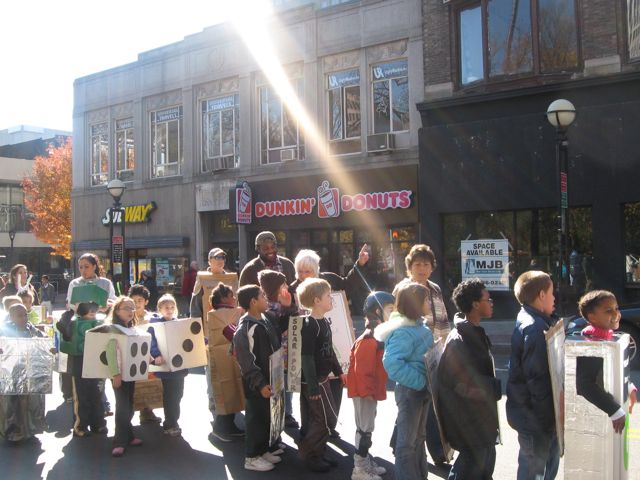 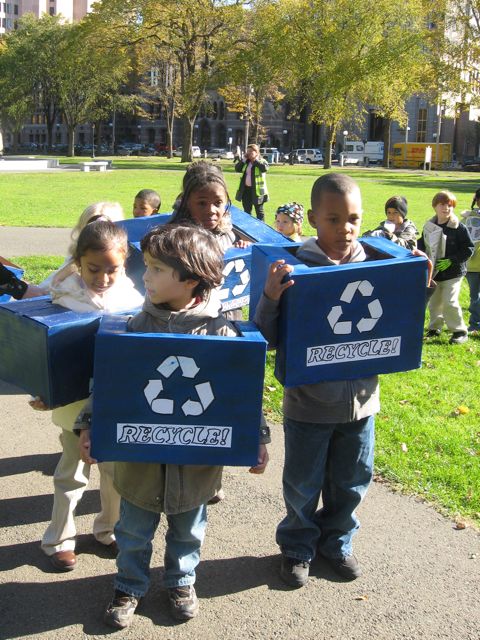 It was hope in a bottle. Delivered by a fleet of autumnal yellow schoolbuses. 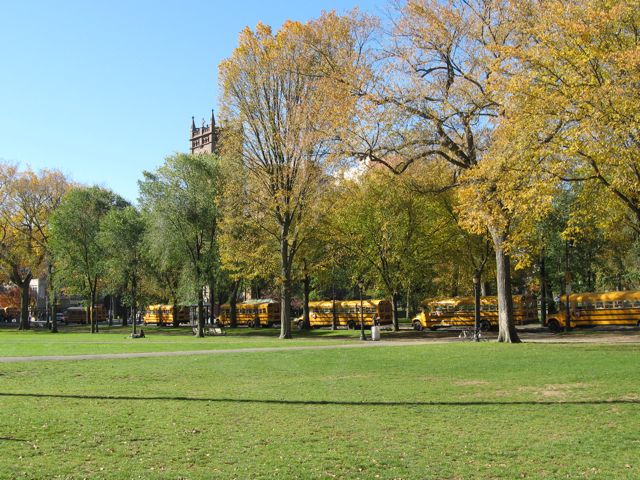 The outfit that got the most enthusiastic reaction from onlookers was this happy little iPod. She dreamed it up herself. 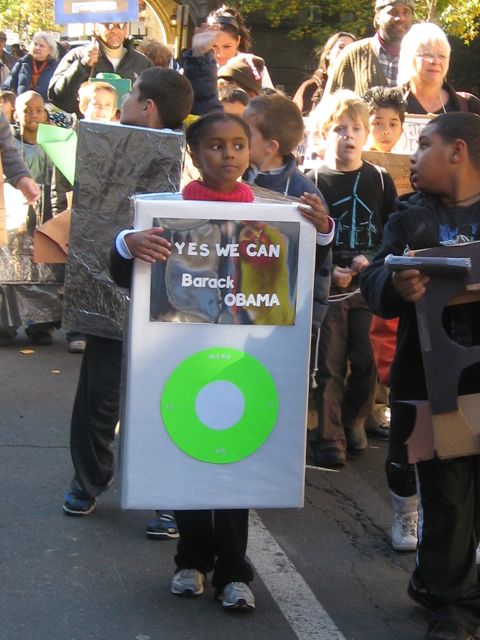 I got chatting with her dad, whose happy job it was to do most of the grunt work on the costume (same way I’ve spent all week making suitably Gaulish accessories for Asterix and Obelix).

Mia’s dad is adamantly planning to vote but is not optimistic he’ll actually get to. The waits in this state are predicted to be 3-4 hours long this year. “Why a Tuesday?” we asked, with ritual indignation. And if it has to be a Tuesday, why isn’t it a public holiday?

As he put it, if you can have Columbus Day for the guy who arguably kicked off this whole USA thing, surely you could have a national holiday for the maintenance of the democracy itself? Then people like him wouldn’t have to worry that they won’t get a chance to exercise their vote, despite turning up first thing in the morning, and then again at lunch, and then again after work, and standing in line each time for literally hours before giving up.

The only upside of the queues is that it's good news for those of us running cake stalls at the public school voting booths (school is the one thing that actually closes for the day). Captive audience, meet red-white-and-blue cupcakes. We’re anticipating a handsome profit to help cover some extra-curricular activities for the kids.

(Do they ever need it! This No Child Left Behind law, tying school funding to test results, has bled all of the fun and enrichment out of the school day. Second and third graders -- six to eight year olds -- only get recess two days a week, and art and music and library get an hour each, so that teachers can concentrate on teaching to the test. A test that drives the kids bonkers, with its ambiguously-worded questions and rigorously inside-the-box thinking. Don’t get me started.)

As well as a historic result, I’m anticipating a record turnout this year. People are doing the usual grumble about how their votes don’t count unless they’re in a swing state, but honestly, how could you not want to be part of a record number? Not to mention all the other not-so-little items on the tickets this year.

There are so many reasons to vote. Pick one! (I pick the Supreme Court). And as always, there are so many impediments to it. One of the little-noted side effects of the foreclosure crisis (local vignettes from which can be found here) is the voting status of the residents of those million foreclosed homes. As the New York Times asked a few weeks ago, where are those people living now? Have they updated their addresses on the electoral rolls? Will the mail find them in time? And do they know they're likely still allowed to vote anyway? Who knows?

One thing is sure: whichever way the election goes, I’m going to cry. At a birthday party the other day, the conversation turned to possible election outcomes (in fact, it started there and never moved, as all conversations do these days). I found myself joking with a friend – a peace-loving, staunchly Democrat greenie and old college pal of Obama, no less -- about how we’ll be mixing cocktails of one sort or another, mojitos or molotovs. If Obama doesn’t win, I’m up for a riot. But honestly, what would we burn? The public library? City Hall? Our own overvalued houses?

Trust me, we want to be unreservedly hopeful about this. But something -- the last four decades? the last two elections? -- has sedimented a layer of superstitious paranoia deep into the bedrock of every Democratically-inclined soul. We’ve been wrong (and wronged) before. Eight years ago, I knew Gore had it over Bush, and four years ago, I thought Kerry had it in the bag (what can I say, I’m sentimental about old soldiers and have a soft spot for intellectuals).

We agreed to do the optimistic thing and stock up on rum and mint, which are far tastier than petrol and more or less the same price. In fact, I’m putting my chips on the table: the kids will be allowed to stay up as late as they want on Tuesday and sleep in as late as they need on Wednesday, waking just in time to party in the streets.

We went trick-or-treating tonight, by Toutatis, looking for signs and portents as well as candy. 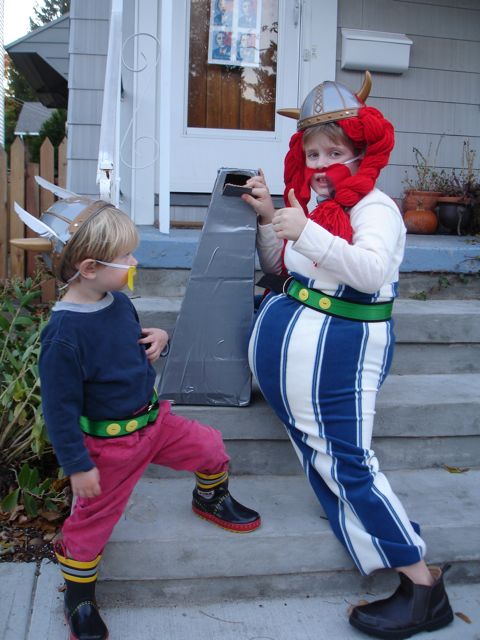 We didn’t see a single gosh-darn Sarah Palin, but we did bump into this guy hanging out on somebody’s front porch. 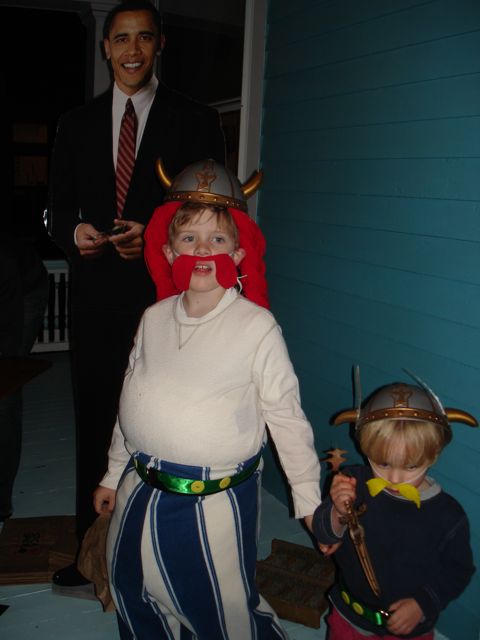 Of all the decorated houses -- giant spider-webs, hovering ghosts, elaborate graveyards -- this one was by far the coolest. From a distance all you could see was the McCain-Palin billboards, which was chilling enough. Then as you approached, you realized there were in fact two tables set up on the front porch. On the left, Obama; on the right, McCain.

The home-owners swore up and down that they weren’t biz-school types or psychology grads doing their homework on the sly. But they were operating a suspiciously sophisticated candy scheme, and they were taking notes.

As kids mounted the steps, they were randomly sent one way or the other. And at each table, they were offered this conundrum:

“Would you like FOUR pieces of candy from McCain, or TWO from Obama?”

Told you it was a blue city, blue state. It was no contest. The Obama candy was flying out of the box, and this guy looked awfully lonely. 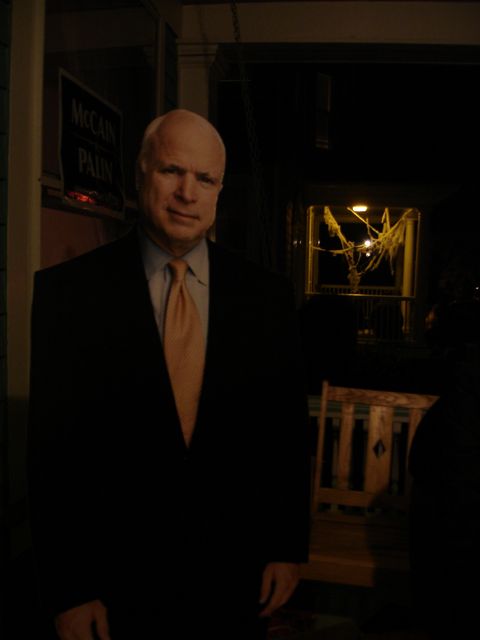