It looked as if the Dalai Lama had hung his washing out, all over the park. Row after row of saffron fabric flapped gently under the cold blue sky. Glimpsed at a distance through the trees, or marching across the horizon, they looked like monks walking in single file. Or not so much walking, as hovering some distance above the ground. 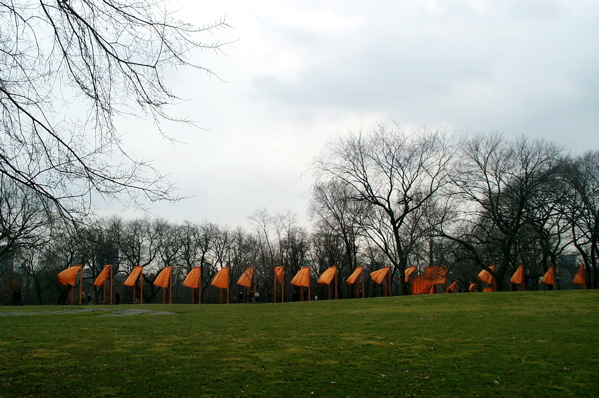 They do that, you know. Monks. Witness this report filed a few years back after a round-the-world balloon attempt foundered in Burma:

"I saw the shining orange object and thought it was a Buddhist monk levitating," Aung Chan, a 70 year-old farmer said after the Breitling Orbiter 2 touched down outside his village yesterday morning.

Thousands of villagers in this deeply Buddhist country, some of whom had never before set eyes on a Westerner, were shocked to see the huge silver balloon, with its orange gondola swinging beneath, descend from the heavens.

On reflection, that story feels apocryphal, but I couldn’t help thinking of the levitating bonzes as we ambled through the park on the opening day of Christo and Jeanne-Claude’s The Gates, accompanied by thousands of other bemused pilgrims. 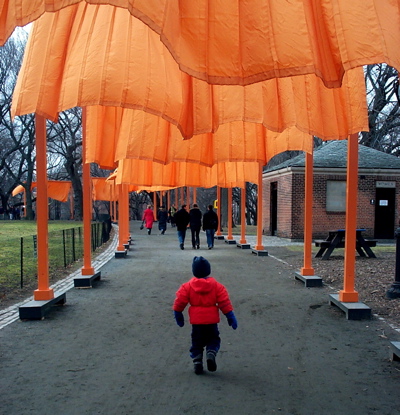 This being New York, everyone had an opinion about the twenty-three miles of vivid orange chutzpah. Brilliant. Stupid. A glorious sight. Expensive shower curtains. An environmental disaster. A complete waste of twenty-one million dollars. A glowing gift to the city.

In the fine tradition of "My two-year-old could do that," it didn’t take long for a mini-version to appear online -- the gleeful work of a Boston-based prankster who was quickly dubbed the Anti-Christo.

[Edited to add: Not to be outdone, someone's two year old did do that: the Duplo Gates break the monochromatic colour scheme but have their own winsome appeal].

I was predisposed to like the Gates: public art makes me smile, and this was public art on an audacious scale. The colour was a bit of a hurdle: orange is my least favourite colour in the entire universe, and these things are really orange. Not the ruddy hue of a real edible orange, or the vermilion of Japanese torii gates, which they resembled in their narrower stretches. 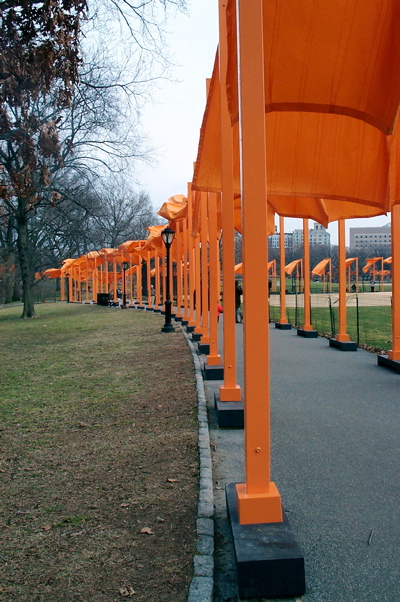 The gates and the drapes both are a chalky neon orange. Traffic cone orange. Emergency plastic fencing orange. Abu Ghraib jumpsuit orange. Hurts-your-teeth orange, although if you catch it in the right light it has a pleasing golden cast, or a mellow hint of apricot. 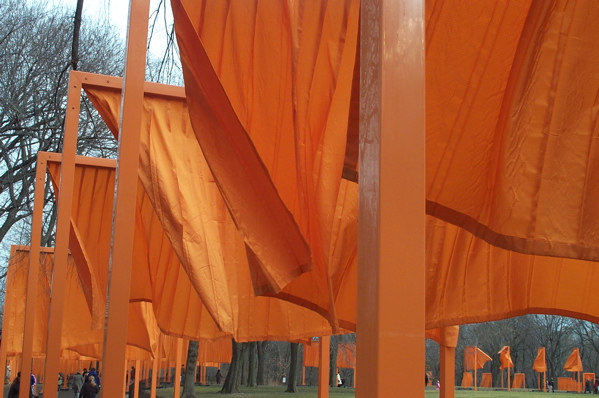 I suppose the idea was to choose a colour that was not otherwise present in the park, so as to make a blinding contrast with the bare trees, the pale blue sky and lemony grass of late winter. 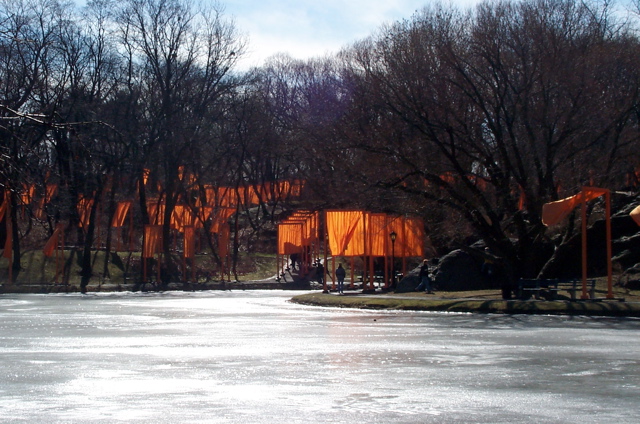 But the artists may have forgotten how ubiquitous construction is in New York: we approached the park from the northwest corner, and the Gates were at first indistinguishable from the elaborate roadwork in the foreground. 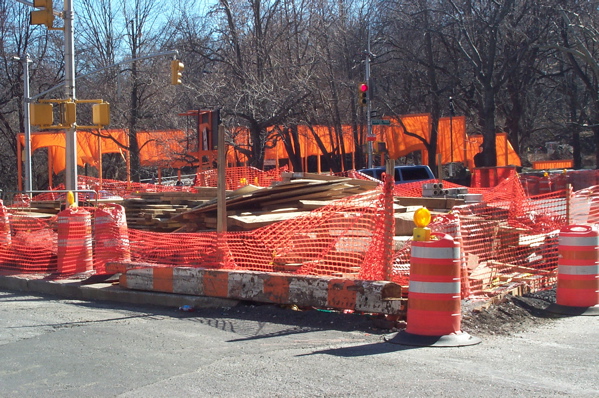 Once inside the park, however, the effect is persuasive. Like a colourfield painting, the orange brought all the other colours into the room. You couldn’t look at it without wondering how different hues would have worked. A royal purple would have been delicious, or a light blue making rivers of movement through the park. One of our party preferred scarlet; another a brilliant gold. Hours after leaving the park, your eyes still sought out every flicker of orange.

It wasn’t just about colour, but movement too: when there was no wind, the curtains hung solemnly like the entrance to a medieval jousting ring (or like a celestial carwash). When the wind came up they began creaking and snapping like canvas at sea. 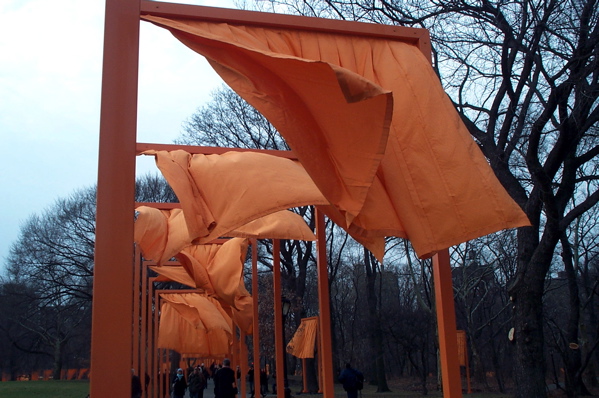 Some were caught rakishly over their frames, like a skirt accidentally tucked in one’s knickers. 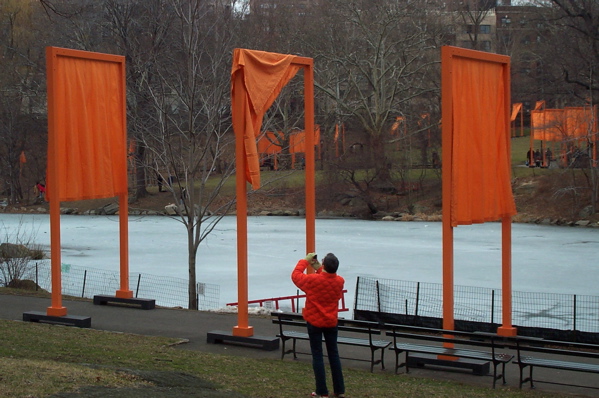 These hapless draperies were put right by official helpers, who roam the park wielding long sticks topped with tennis balls, which they use to unhook the curtains. (Word to the wise: these are the people to ask if you want a souvenir square of fabric).

We paused next to a frozen pond to absorb the scene, and under the greening willows, Busytot did his best to break the ice. He was not in mortal peril, but his father, who was encouraging him to drop rocks onto the hard surface, very nearly was. Talk about thin ice. You drop him in, you fish him out. 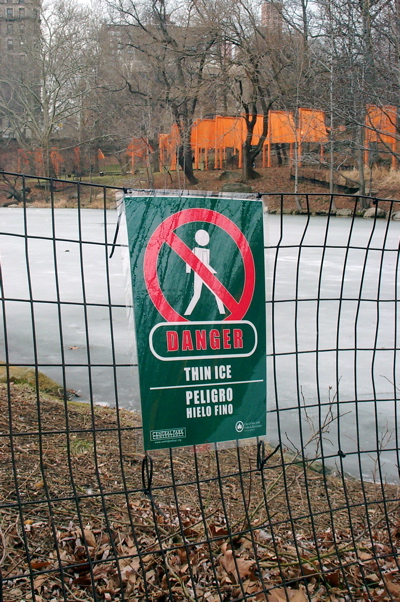 Of course they were fine. I suddenly remembered visiting the city when we first knew we might live here. Four winters ago... It was snowing, and we wandered into the Park as if into Narnia. A path led down and across a small valley, and we followed the trail -- only realizing halfway across that we were standing on solidly frozen water. I couldn’t get to the other side fast enough. I didn’t trust the city then.

I trust it now, though. Over the weekend I went back down, alone. Late on Saturday night I found myself wandering through the southernmost corner of the park, from 59th St up to 72nd. The Gates looked different at night: colder, paler, more austere. Lonelier, despite the occasional dog-walker, tourist family, and the art-loving cops stationed every block or so. The fabric was awfully still, and far off through the trees the gates stood, rank on serried rank, like solemn markers. The park had the feel of futuristic cemetery.

Up opposite the Dakota building, I ventured into Strawberry Fields, which isn’t much to look at in the winter: three converging paths that meet at a small circular mosaic with the legend “IMAGINE.” The mosaic is always adorned with shriveled roses left in tribute, and is often home to a small cabal of Lennon fans, sometimes with guitar in hand, churning out mournful versions of the classics: Woman, Beautiful Boy, and once, unforgettably, Happiness is a Warm Gun.

Here’s the funny thing. There were no Gates in this corner of the park. They marched studiously around it, but not through it. The ordinarily hallowed spot felt abandoned and tatty – a small, forgotten, rubbishy corner of no consequence. I wonder if the whole park will feel that way when the Gates are taken down at the end of this week.

For a wide range of other responses, check out this free-for-all blog, with pics and podcasts, convened by Andy Carvin. The New York Times - free registration required - also has extensive coverage, including nifty satellite images of the park with and without the Gates.