One minute you’re wading through the baby days as if up to your middle in golden syrup. And the next you’re the parent of a three year old who can spell his name (“it got a O like Obama!”), has a best friend, and greets the news that a cousin’s pet has died with a fascinated gasp: “Dyed?!! So that cat got purple hair now?”

Hard to believe it’s three years since the infamous birth story, shorter than an episode of Blue’s Clues, and, mercifully, just as uncomplicated (albeit twice as entertaining). Perfect for his big brother’s attention span at the time.

Harder still to believe that the new guy is now barely a year younger than his big brother was then.

Who knows where the time goes? (Sing it, Sandy). At such moments of existential uncertainty, one naturally turns to the classics. Like The Time Machine, by H.G. Wells, in which the Time Traveller describes his experience thus:

I saw the sun hopping swiftly across the sky, leaping it every minute, and every minute making a day. ... The slowest snail that ever crawled dashed by too fast for me.

(Thanks to everyone who brought food in those early months, when dinnertime arrived on the heels of breakfast and vice versa).

The twinkling succession of darkness and light was excessively painful to the eye.

(More fool us for attempting to Helen-Keller the speechless toddler into language via teaching him the miraculous action of the light switch.)

I saw trees growing and changing like puffs of vapour … they grew, spread, shivered, and passed away.

“I saw huge buildings rise up faint and fair, and pass like dreams.”

(That would be the lego, crunched viciously underfoot in a darkened room).

You get used to it. Even the Time Traveler did:

The unpleasant sensations of the start were less poignant now. They merged at last into a kind of hysterical exhilaration... so with a kind of madness growing upon me, I flung myself into futurity.

And so have I. David’s gorgeous post the other day moved me immensely, not least because it finally gave me a sense of peace with the word “spine.” I used to hear that word and shudder, thinking of the two spinal taps my little guy endured before he was one year old; his three hospitalizations in two years. Now I look at him and admire his backbone, in every sense.

I confess I was slow to commit; not because he wasn’t gorgeous and wonderful and one hundred percent mine, but because he seemed at first so frail. (Hard act to follow: his robust big brother was the bonniest baby going). I worried. I still worry. He still eats like a bird that’s on a diet; the hand-me-down trousers fall off his snake-like hips.

But he’s as tough as anything and floats through the day with a smile on his face. The boy is constitutionally chipper. When he stubs a toe or bonks his head, he weebles his way back to equilibrium within seconds. If it’s a bad bump, he wails “I need a hug and a kiss, I really do!” and flies across the room - to give you the hug and kiss that will make him feel better.

You do get the occasional volcanic threenager outburst, usually when you’ve just effed up the ineffable in some thoughtlessly irrevocable way. Peel the lid off that yoghurt container at your peril, even if you have five others just like it in the fridge. What do we want? Total reversal of the laws of physics. When do we want it? Like five seconds ago, you fool.

The blow-up always takes me by surprise, but he’s almost always over it by the time my ears stop bleeding. (Flashback to our wry pediatrician in New York who said “Oh yeah, a healthy two-to-three year old is clinically indistinguishable from someone with OCD and a few anger management issues.")

By special request, I made him and his best friend a mother-flippin' spectacular penguin birthday cake for their party, a triple-decker cakey Antarctica, swathed in a thick layer delicious snowy icing and surrounded by a sea of toxic blue jelly. 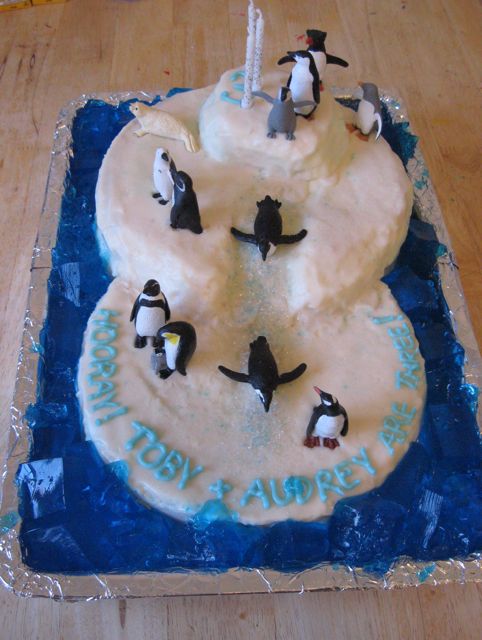 (Penguin slide designed and engineered by big brother and a vegetable knife.) 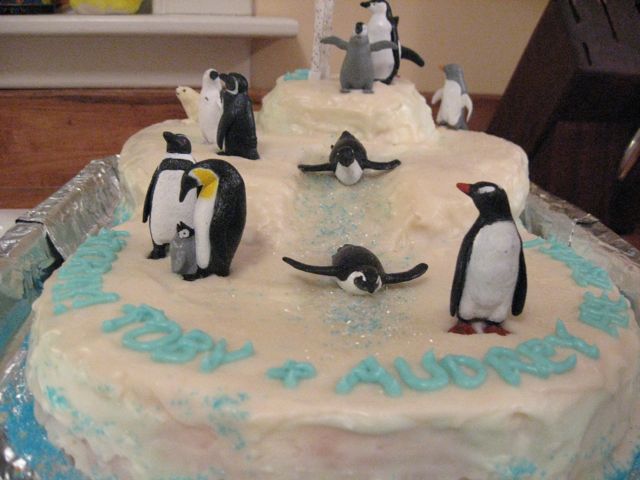 It was a huge hit. And when I say hit, I mean birthday cake = sugar yard-glass. I'm so very glad the other family hosted the party.

Only after the whole birthday palaver wound down did I remember the very explicit gift list he dictated before Christmas, and which we had completely failed to honour: “A yellow dump truck, a real parrot that talks, and jellybeans.” He didn’t seem too miffed with the castle lego, thankfully; he is obsessed with castles, castle guys, castle hats, and castle weaponry. The fact that we have a castle at the end of our street is a particular point of pride. (It's a Polish Catholic castle, since you ask).

When he was a little baby, he laughed like Arnold Horshack. Gratifyingly, he still does, especially when he’s “just joking you,” which he pronounces with an extra “n”, as in “I just jonking you.” (Note to the linguists reading: is it an exaggerated attempt at a New Zealand accent? “Beanch” gets the same treatment, as do many words with long vowels and short consonants). "What say we get a sea lion for our house? That be nice. Ha ha, I just jonking you! [wheeze, snort, honk]."

The truly nice thing about this full-on breakthrough into language is that he is steadily forging a proper relationship with his big brother. The other day I stood downstairs in the public library and watched them walk off hand-in-hand to get to the children’s library upstairs. They stopped and conferred about whether to take the lift or the stairs. Big brother kindly let little brother push the button for the lift, and carefully ushered him in.

I waited there amid the New Books feeling all proud and misty, watching for them to come out onto the mezzanine floor above. The lift took long enough that I worried briefly that they were headed to the basement, or to the offices on the very top floor. And then the doors opened. And they didn’t step out.

My heart was in my mouth.

Until with a banshee shriek first one big boy, then one smaller one, launched themselves through the doors and barrel-rolled across the floor to the edge of the balcony. They picked each other up, dusted themselves off, and headed off into the children’s library, holding hands. It was half Hundred-Acre Wood, half Star Wars, all good.